Friend of the Court participant Geoffrey Supran trumpeted this Baltimore filing event last week as though it was some marvelous new development in the area of global warming lawsuits. It isn’t. It’s essentially a boilerplate regurgitation of the amici curiae Supran and his associates filed back in early January in California, all the way down to the conclusions which Supran quoted in his Tweet about this one. He inadvertently reinforces this copycat problem by noting how the file can be downloaded from the Sher Edling law firm — the same firm with 9 boilerplate global warming lawsuits against energy companies which I’ve detailed in my Sher Edling “boilerplate”-tagged posts as being enslaved to a solitary piece of worthless evidence used to indict skeptic climate scientists as peddlers of industry-orchestrated disinformation. What Supran does here is reinforce a particularly damaging fatal flaw within those lawsuits.

Since this latest “Brief Of Amici Curiae Robert Brulle, Center For Climate Integrity, the Chesapeake Climate Action Network, Justin Farrell, Benjamin Franta, Stephan Lewandowsky, Naomi Oreskes, Geoffrey Supran, and the Union Of Concerned Scientists” filing is such a boilerplate copy, I’ll direct new readers here to my 2/8/19 dissection of the first January version. To their credit, the law firm staffers spelled co-participant Robert Brulle’s last name correctly this time, compared to the January version. And for those curious about it, the small differences between the two filings can be seen via the DiffNow site when the January and September briefs are compared. My free DiffNow report was limited in length, but handily stopped at the two briefs’ most problematic pages, regarding the supposedly ‘smoking gun’ industry memos that are falsely attributed to the Western Fuels Association “Information Council for the Environment” (“ICE)” public relations campaign.

For emphasis, directly from the two briefs: 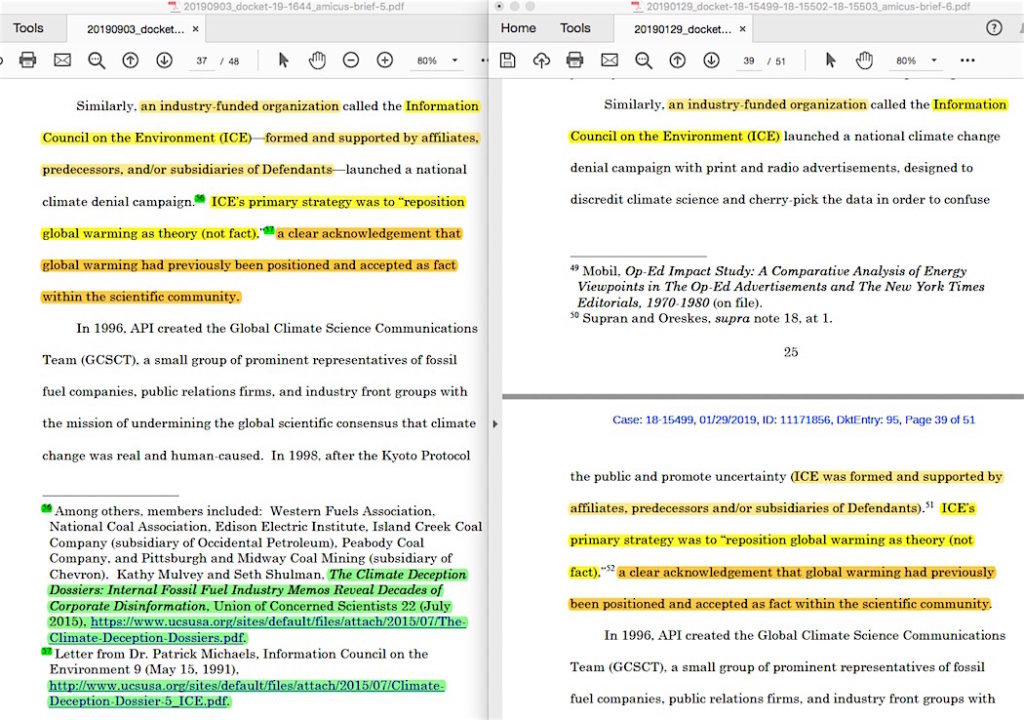 ICE was formed and supported by affiliates, predecessors and/or subsidiaries of Defendants. ICE’s primary strategy was to “reposition global warming as theory (not fact),” a clear acknowledgement that global warming had previously been positioned and accepted as fact within the scientific community.

The thee-town pilot project ICE campaign was so short-lived, the probability of a single one of the defendant companies ever hearing about it is very small, but the fatal problem with the court briefs’ assertion is that the specific ‘repositioning’ strategy was never a goal of the campaign. So how can it be possibly be established that the energy industry knowingly engaged in disinformation campaigns built on the cornerstone of the ICE campaign, if they never heard of it or its explicit instructions on how to undercut ‘accepted facts’ by repositioning them back down to a ‘theory appearance’?

Piling on to this problem, this latest Baltimore amici curiae adds the Union of Concerned Scientists to its list of participants. For anyone to say the UCS revealed anything new in their “Deception Dossiers” collection about those “reposition global warming” memos is highly troublesome, possibly disingenuous at the very least, and instead points a giant arrow at the question of why their 2015 foray in this situation looks like an effort to muddy the origins of the particular people who “obtained” those strategy/targeting memos, or who were “alerted” to where the memos (along with newspaper ads and related documents) were supposedly archived years earlier. Whose name appears at the lower part of the page in my previous sentence’s screencapture image? Amici curiae co-participant Naomi Oreskes.

But wait, there’s more: it wasn’t just Geoffrey Supran using Twitter to announce the news of this Baltimore brief. So did Climate Liability News (CLN), in a Tweet linking to their 9/5/19 report which ended with a most interesting disclosure at the top of one regarding the other “Center for Climate Integrity” amici curiae brief participant:

That Climate Communications and Law, whose top-listed board member above Wiles and Johl is Kert Davies, a person seen in long-ago fashion at the organization which gave the “reposition global warming” memo its first major media traction, and seen again very recently in efforts to portray energy companies as evil. That Kert Davies, current proprietor of the “Climate Files” website whose ICE pr campaign ad ‘evidence’ is cited on the Press Room page of the same Sher Edling law firm that’s handling the above-mentioned 9 current global warming lawsuits. That ICE ad ‘evidence,’ where its logo is half-hidden at Sher Edling’s page, but which can be found in Greenpeace’s scan pages where the never-used name for the ICE campaign is seen in that logo, along with a “toll-free” phone number that can’t possibly be toll-free by virtue of having a 701 area code. No wonder Sher Edling or Kert Davies might want to hide that part of the Chicken Little ad. Repeating for emphasis, that Chicken Little ad, detailed in that 2010 book’s chapter five contribution.

Good thing Geoffrey Supran is error-free. Oh, wait, maybe not. In one of his other recent Tweet diatribes about how sinister the fossil fuel industry can be, he quotes rock star Roughton Reynolds’ (a person having self-admitted mental health problems) claim about how “billions and billions” have gone into industry-orchestrated propaganda and lies.

Could Supran actually point to more than a one million dollars being put into material that could be proven to be outright lies designed to undercut the ‘certainty’ of man-caused global warming?

This can’t be repeated or emphasized enough: if one solitary thing can be gleaned from all these ‘crooked skeptic scientists’ accusation efforts, it is that they all ultimately only have one shred of so-called ‘evidence’ that actually resembles a conspiracy of fossil fuel company executives paying skeptics to knowingly lie — which, by the way, is not the worthless API “Victory will be achieved” memos that are nothing more than a basic truism on identifying whether the public is better informed about the issue — but is instead the even more worthless “reposition global warming / older, less educated males … younger, lower-income women” strategy/targeting ‘memos’ falsely attributed to the Western Fuels ICE campaign.

Geoffrey Supran and his associates just demonstrated that enslavement to this single source of ‘evidence’ in their days-old Friend of the Court brief. Those strategy/targeting ‘memos’ were never part of the ICE campaign, they were a rejected proposal that died of neglect from being too weirdly worded to comprehend, so the skeptic climate scientists would have never known about that strategy, and thus Exxon by default, as well, would have never heard of that strategy years later, despite what Al Gore has tried to imply.

This kind of political suicide by Supran and others in the global warming lawsuit business can only go on for so long until it implodes from being devoid of substantive evidence.