Among the five major ‘leaked memo’ situations which enviro-activists try to say are proof of sinister fossil fuel industry collusion efforts with skeptic climate scientists to spread doubt about the certainty of man-caused global warming, only two stand out at least on a superficial level as being particularly damaging. The one with seemingly the most devastating appearance is the so-called “Information Council for the Environment” (ICE) public relations memos of 1991, supposedly detailing Western Fuels Association (WFA) efforts to push misinformation that would achieve the goal to “reposition global warming as theory rather than fact” among a nationwide audience of gullible “older less-educated men and young low-income women.” Problem is, those memos are worthless as evidence of that conspiracy because they were never part of the short-lived, small three-city-only pilot project ICE PR campaign.

The second most damaging, laughably so when its actual content is taken into consideration in an objective manner, is the 1998 American Petroleum Institute (API) “Victory Will Be Achieved when …” leaked memo.

First, a series of comparisons to paint a picture of why particular individuals felt a need to push this worthless memo as “smoking gun” evidence of a fossil fuel industry ‘misinformation campaign’:

There’s no current NET website; its founding organization, the Pew Charitable Trusts merged it into Pew’s Environmental Group by late 2007. Rummage through archive pages for the NET, and you see its “Global Warming campaign” page links to its exposé of the API memo up to October 1999, but in early 2000, it was gone from NET’s revamped home site, and was nowhere to be seen in NET’s new “HotEarth.net” website, or its subsequent newer 2004-5era “net.org global warming” pages website or its “Newsroom” pages — featuring ex-Ozone Action workers Brandon MacGillis and Kymberly Escobar. Good luck trying to find any mention of the API memo among the pages of the Pew Charitable Trusts in 2008 and onward, particularly in its “Global Warming” pages. Pew never mentions the memo anywhere that I can readily find, but I will gladly correct the record on that in this space with an author’s addition.

Why did the Sierra Club never again focus on the alleged problem of corporate-paid ‘shill scientists’ spreading misinformation via the “smoking gun” ICE memos they had? Perhaps that simply wasn’t even close to their central interest. Why did the NET seemingly abdicate pursuing the situation surrounding the API memo? Perhaps for the same reason.

Why would the “save the whales” Greenpeace organization take over? Because in 2000, the old Greenpeace, with its then-recent lack of focus and declining financial support, was not the new Greenpeace USA. That wasn’t merely the opinion of a victim of “Greenpeace USA née Ozone Action,” the situation was touted by a far-left group as well. 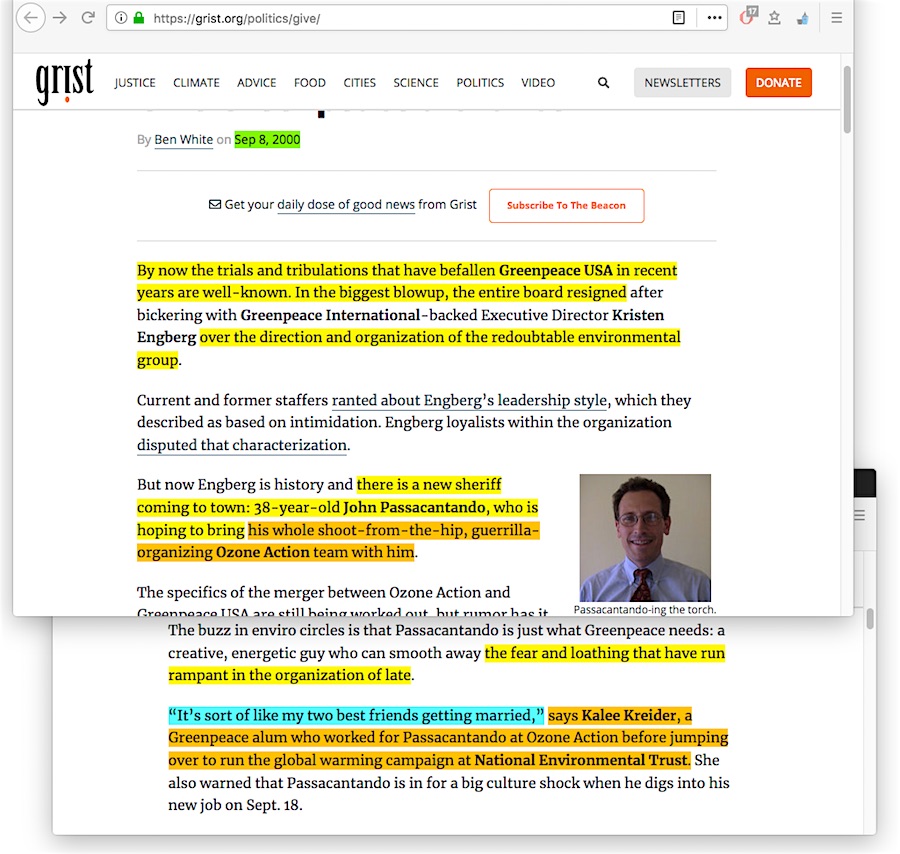 Small world. But what reason would Grist have for portraying Passacantando as a gun fightin’ sheriff? While there is some really small world collaborative efforts collected in “Greenpeace USA née Ozone Action” document scans, look no farther for the answer than their collections on Dr Singer and myriad other scientist victims / industry enemies in their “industry shills” files. As I described in my October 22, 2015 blog post, when I dumped the words “reposition global warming” into the Greenpeace Archive’s search window, that was the first time after seven months of internet searching when I had been able to read the memos which had long been attributed to the ICE campaign, while their full context had otherwise been buried from public view.

Why is the API “Victory Will be Achieved …” memo worthless?

To fully understand this situation, it helps to look at this through the eyes of someone who — rightly or wrongly — perceives that only a lopsided argument on an issue is being presented to the public, and the public would become better equipped to make an informed decision about the issue if a plausible and fact-based alternative is made widely available. We report, they decide, in other words.

No need to trust me on that latter point. Unlike the alleged ICE memo collection which remained hidden from public view until I began writing about it, the API memo was available in easy-to-read text provided online by the National Environmental Trust the same day John Cushman’s NYT article about it was published. Read the full text here, beginning about halfway down NET’s page. Arguably, the memo could have more appropriately used the words “question” rather than “undercut” in one sentence. What’s otherwise blatantly missing from the memo? Any indications that the participants perceive their position is an outright lie and that liars-for-hire have the sole objective of spreading lies.

To yell “corruption!”, you must first show where it happened. It is nowhere to be seen in the memo, and the people at the NET, Greenpeace, and Ozone Action and elsewhere do not have the climate science expertise to say the skeptic climate scientists are lying. And if the memo is supposed to be evidence of sinister efforts, where is the sinister intent within it, or accusations that the other side is corrupt?

See the problem? If those activists can do no more than point to a sincere effort of industry people wanting to inform the public about a part of the science assessments which is rarely presented objectively in news stories so that the public could decide for themselves who makes a better argument, that would be fatal to the issue. Ross Gelbspan succinctly pointed out how the public’s eyes might glaze over at such an impasse between two sides “Come back and tell us what you know when you really know what you’re talking about.”

See the solution for prompting the public to dismiss those skeptics out-of-hand? Call the skeptics industry-paid shills and trumpet how this is proven by leaked memos declaring “Victory will be achieved when we reposition global warming as theory rather than fact.” Victory will ultimately be achieved when the larger public intuitively accepts the ‘industry-paid shills’ accusation without question, and when nobody in the field of journalism questions any part of the ‘evidence’ for it or people surrounding it.

At the end of my January 8, 2019 blog post, I offered a facetious example of what the enviro-activists’ ‘secret memo’ might look like, complete with sinister intent. Problem is, as reported by the Free Beacon in April 2016, there already is a memo partly resembling that. Not mentioned directly by the Free Beacon, it involves one of the lawyers pushing a series of recent ‘Exxon pays skeptics to spread misinformation’ lawsuits ….. and two ex-“Greenpeace USA née Ozone Action” people, who wanted to ….

… delegitimize them as a political actor

Corrupt … based on what evidence? Read the rest of that anti-Exxon memo here. Do we see a sincere effort to inform the public about both sides of the science in order to decide for themselves which side sounds more plausible? Or do we see the appearance of a one-sided, self-serving mentality from a Green Industry clique?

But the real question is, are the people who constitute the central clique behind the efforts to portray skeptic climate scientists as industry-paid shills truly sincere about their viewpoints, or do they know their core two bits of ‘leaked memo evidence’ has been worthless this entire time?

That’s the difference between achieving a victory via the dissemination of science material in full context, compared to achieving victory through widespread belief in unsupportable character assassination accusations?
————————————————————————
Arguably, sixth in a four part series.