You’d think the main people behind the effort to keep the idea of catastrophic anthropogenic global warming (CAGW) alive would have figured out by now that it’s a waste of time to float the notion that skeptic climate scientists receive too much undeserved attention from journalists. The danger is that rather than anyone, CAGW skeptic or outright believer, being able to point to any CAGW skeptic scientist/speaker given fair coverage any time in the just last decade at a mainstream media broadcast or newspaper outlet, the counter-opposite might be revealed, such as what’s been seen over the last two decades at the PBS NewsHour. “But – but -but – Pat Michaels and Willie Soon have been on CNN and in the New York Times!”, CAGW believers might exclaim. Right. Each castigated as shills of the fossil fuel industry. When has anyone ever seen CAGW scientists like Michael Oppenheimer* insinuated as shills of Big Green operatives by mainstream media reporters?

Yet, only two weeks ago, a supposedly peer-reviewed paper titled “Discrepancy in scientific authority and media visibility of climate change scientists and contrarians” published at Nature Communications attempted to float that exact ‘too much media balance’ notion. One of the paper’s blunders was to attempt to compare 386 ‘pro-CAGW’ people to an equal number of opposite “prominent contrarians.” Willis Eschenbach at WUWT goes into much deeper detail on how the comparison’s methodology is suspect, as does Larry Kummer at Fabius Maximus. I think I showed fairly well in item #2 of my Part 1 blog post how the “prominent” bit collapses when the list includes people like me.

The far bigger error in the paper, however, was to classify their other data source, the Desmogblog organization, as a benign-sounding ‘project’ objectively documenting known promulgators of CAGW disinformation. Intentional, or inadvertent due to sheer ignorance, that portrayal itself is disinformation.

First, how many of their staffers/bloggers have actual climate science expertise enabling them to know what science disinformation is? None are readily found. Meanwhile, not long after the creation of the site, it could not restrain itself from revealing what its political bias was. And who was its star blogger from January 2006 to November 2010, writing over 500 blog posts? Ross Gelbspan.

There’s a reason for that. As I noted in item #1 of my prior post, Desmog’s creation was inspired by, and built on the works of Ross Gelbspan. Co-founder James Hoggan said as much, bizarrely admitting his own ignorance about climate science while castigating climate science “liars” and suggesting how they could be muted. 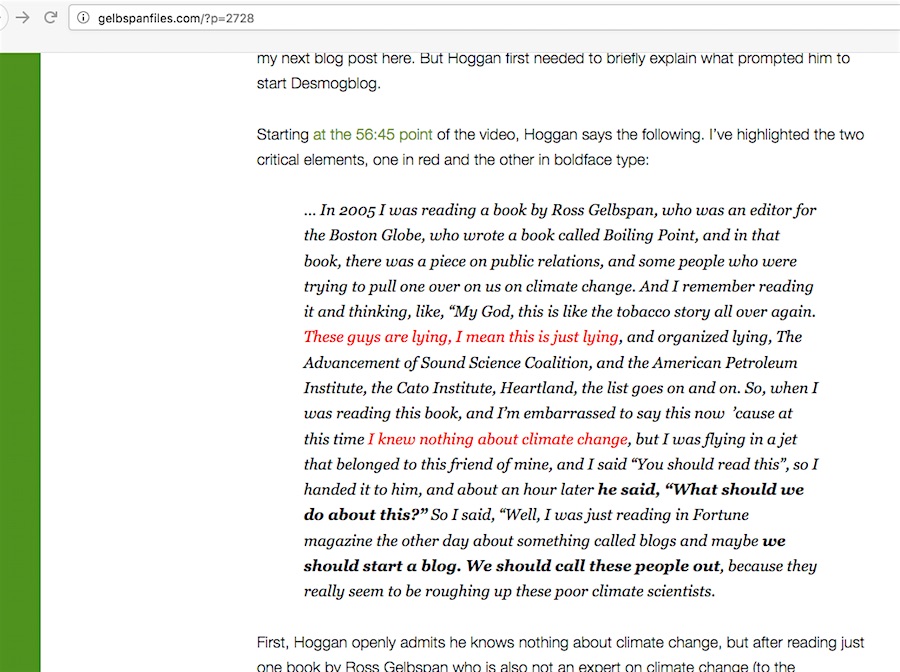 Who was Desmog’s other co-founder? Lord Christopher Monckton noted in last week’s WUWT piece it was John Lefebvre. While the somewhat unreliable Wikipedia entry for Desmog notes to this day that Desmog’s other co-founder is not named, deeper searching turns up Lefebvre’s own self-labeling that way in two of his six total blog posts (here and here), along with a couple of old references to him that way (here and here) by James Hoggan. Problem is, Lefebvre really appears to be little more than Desmog’s financier.

So who might the actual other co-founder be? Ross Gelbspan clearly stated 8 seconds into this audio interview,

… they sort of formed because they were reading the stuff I was doing about the skeptics, all the skeptics I was exposing, so they asked me to sort of found it for ’em, and I did …

Gelbspan is no climate science expert, either, contrary to labels about that elsewhere. And there’s little doubt about what position he had at the time of Desmog’s late 2005 startup date. 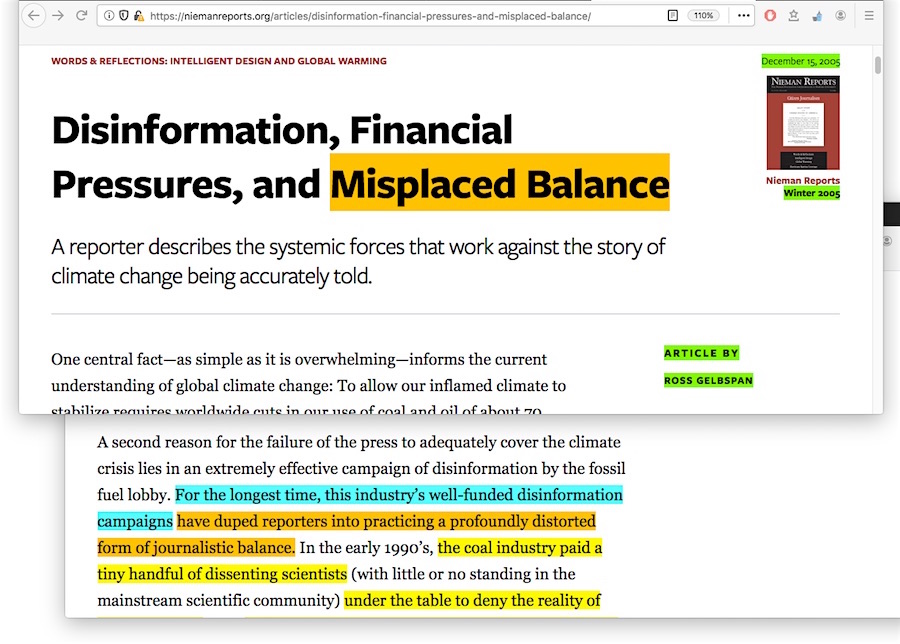 The two week-old Nature Communications paper is little more than yet another rehashing of the old “skeptics get more media balance than they deserve” talking point. Want to see one more example pointing back to Gelbspan, which also points to a disturbing interconnectedness to the whole situation? Remember my little quip about *Michael Oppenheimer in my opening paragraph above? Have a look at the following from a summer 1997 book review:

THE HEAT IS ON, May 04, 1997, by Michael Oppenheimer [Environmental Defense Fund chief scientist]: Gelbspan is particularly insightful on the effectiveness with which this campaign has obfuscated the issue and dazed the body politic by deploying arguments of a handful of scientists whose views conflict sharply with the rest of the scientific community…. He also takes the press to task for its well-intended adherence to a “fairness” model that is more fittingly applied to political arguments because it provides equal time to all sides. With science, unlike politics, there is usually only one truth …

Meaning the science is settled and journalists should start reducing the disproportionate coverage given to skeptics, who are paid oil money to lie anyway.

What’s old is not new again.

It’s the same old unsupportable talking point with the sole intention to nail the coffin shut on skeptic climate scientists being taken seriously. Instead of providing everyone with coffin nails and hammers, what the hapless authors of this Nature Communications paper may have inadvertently done is hand pry bars to objective reporters, Federal investigators, and Big Energy Company defendant lawyers, so they can open a Pandora’s Box about where the baseless accusation about oil company / skeptic scientists collusion originates, and why there was ever a need to concoct talking points about ‘too much unneeded media balance for skeptic climate scientists.’**

** who was it in 1992 who quoted that activist scientist at the Boston Globe? Oh, yeah.