…. stop and look around. If discover you are in a hole, for goodness sake, stop digging. Such is the advice I would have given to the Union of Concerned Scientists before they plunged off a credibility cliff with this wipeout. 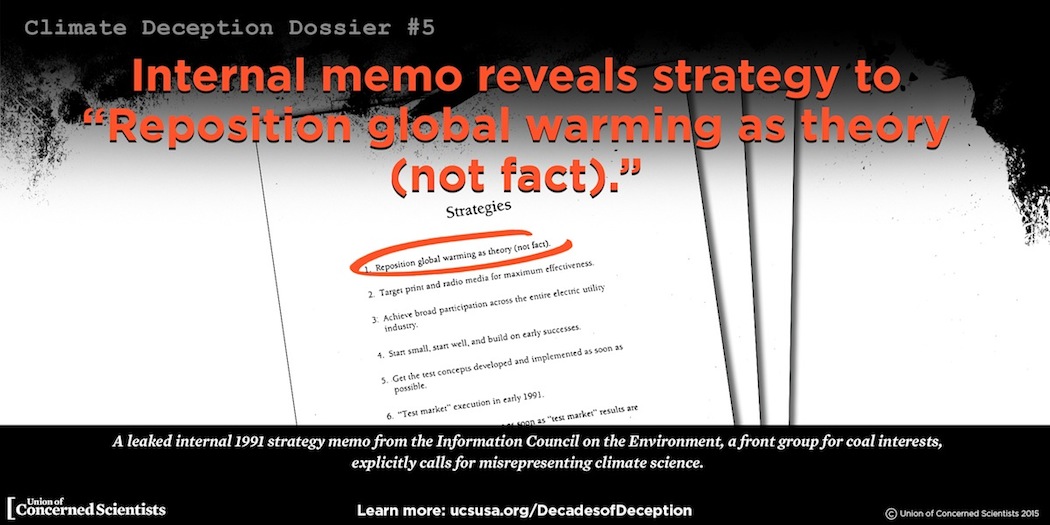 Dive into their newest page, “The Climate Deception Dossiers”, a case study of “The ‘Non-smoking Gun’ Leaked Memos Pattern” I detailed back on November 21, 2014, and you see I mentioned both the API leaked memos problem and the Western Fuels leaked memo problem. I really should add some words to my old post about UCS’ “GCC 1995 Primer on Climate Change Science”, since it fits right into the mold of the other two:  all guilt-by-association, with literally not a shred of evidence proving skeptic climate scientists were paid industry money under explicit instructions to fabricate lies about man-caused global warming.

Most hilarious of all is how UCS, with its “Deception Dossier #5: Coal’s ‘Information Council on the Environment’ Sham” PDF file, could not bring itself to disclose* that this was a direct copy ’n paste of “Greenpeace USA née Ozone Action”’s scan collection of the Western Fuels ICE documents – minus the page one summary from Ozone Action. [ * Author’s 7/14/15 clarification: Nope, you must go all the way down to pg 40 (printout pg 32) of UCS’ separate ‘all dossier report’ before you find out that they “accessed” Greenpeace’s file scans. But nowhere else in the report is any mention made of the significance of the identical scans being at Greenpeace, nor credit to anyone for alerting them to Greenpeace’s scans file.]

What an incredibly reckless thing to do, made worse by showing the entire Greenpeace scan collection which had otherwise been hidden from easy internet search discovery for nearly a decade, a collection which nobody previously quoting from/reporting about dared to show in its full context all the way back to when it was first mentioned. UCS can show their infographic all they want, but the moment any inquisitive open-minded person digs further into the actual ICE memos and not only notices that the supposedly sinister strategy to “reposition global warming as theory rather than fact” phrase is not what it is portrayed to be, and then notices there is an odd font change among memos supposedly being one big consistent collection, this will only spell trouble for the entire collective notion that evidence exists to prove skeptic climate scientists are crooks.

If it can be said there is a cancer within the political side of the global warming issue regarding a total failure to back up accusations against skeptic climate scientists, this latest blunder by the UCS only metastasizes it further. Worse, it seems a group of alleged concerned scientists now has every appearance in the world of committing political suicide by choosing a character assassination tactic against their critics rather than the far more effective tactic of solidifying their cause by wiping out the science points of their critics.

(hat tip to Geoff Simon for his Twitter alert to this earlier today, and my thanks to Anthony Watts for inviting me to submit a summary guest post to WUWT on this situation)