Just three weeks ago, enviro-activists applauded the October 12, 2020 filing of the Maui v. Sunoco lawsuit. No doubt the residents there would see the logic of sharing pretty much all of the lawsuit details with the neighboring Honolulu v. Sunoco one — same Table of Contents format, same Introduction wording, same accusatory section, etc. Makes sense, Maui and Honolulu are neighbors supposedly suffering the same catastrophic man-caused global warming harm. But wouldn’t the residents of Maui be a little disappointed to find out their lawsuit appears to be little more than a pure hand-me-down copy of Delaware v. BP which is also handled by the same law firm handling their case? After all, Delaware has nearly the same accusatory section, nearly the same Introduction wording, and nearly the same Table of Contents.

Despite not yet appearing on the Sher Edling law firm’s page for their collection of lawsuit filings as of this publication date, they are clearly the law firm for the plaintiffs. What other ingredients are needed to make this Maui filing into a Sher Edling law firm boilerplate copy? 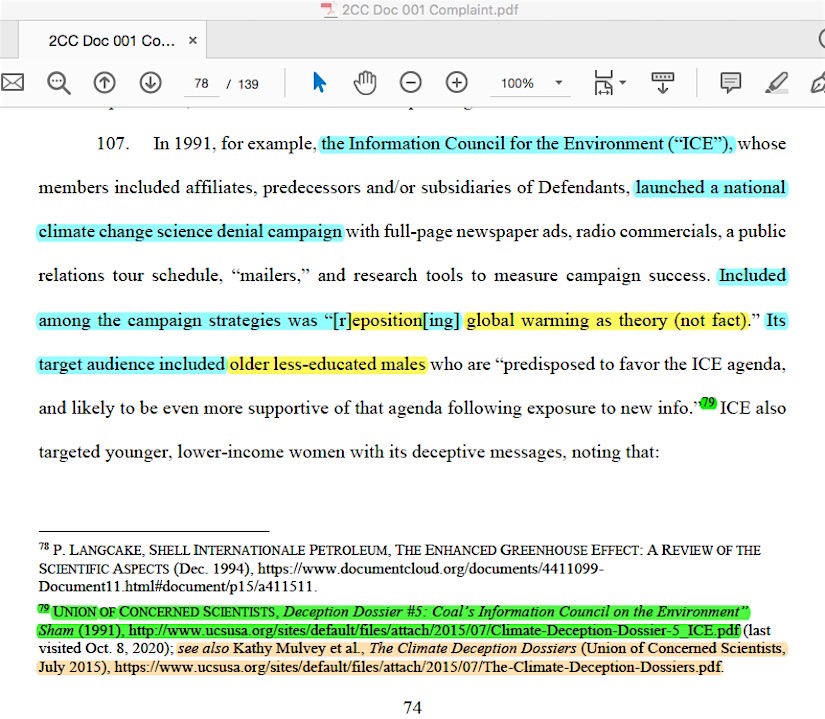 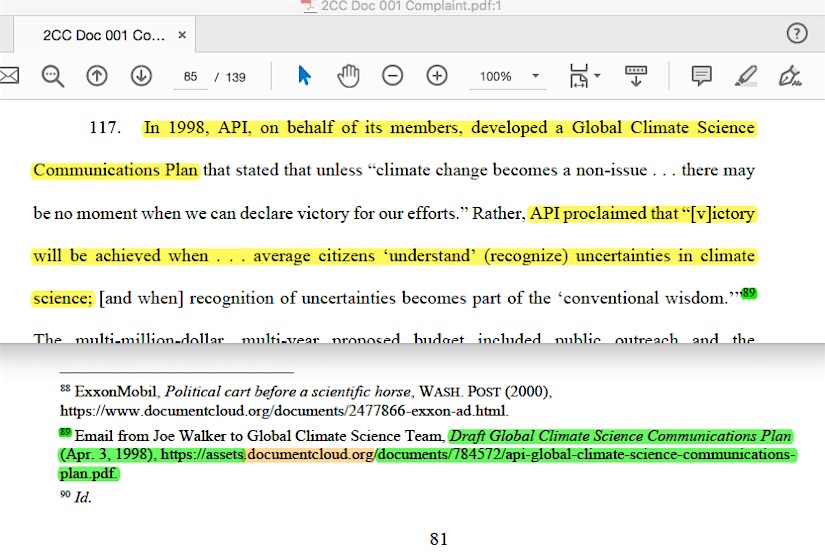 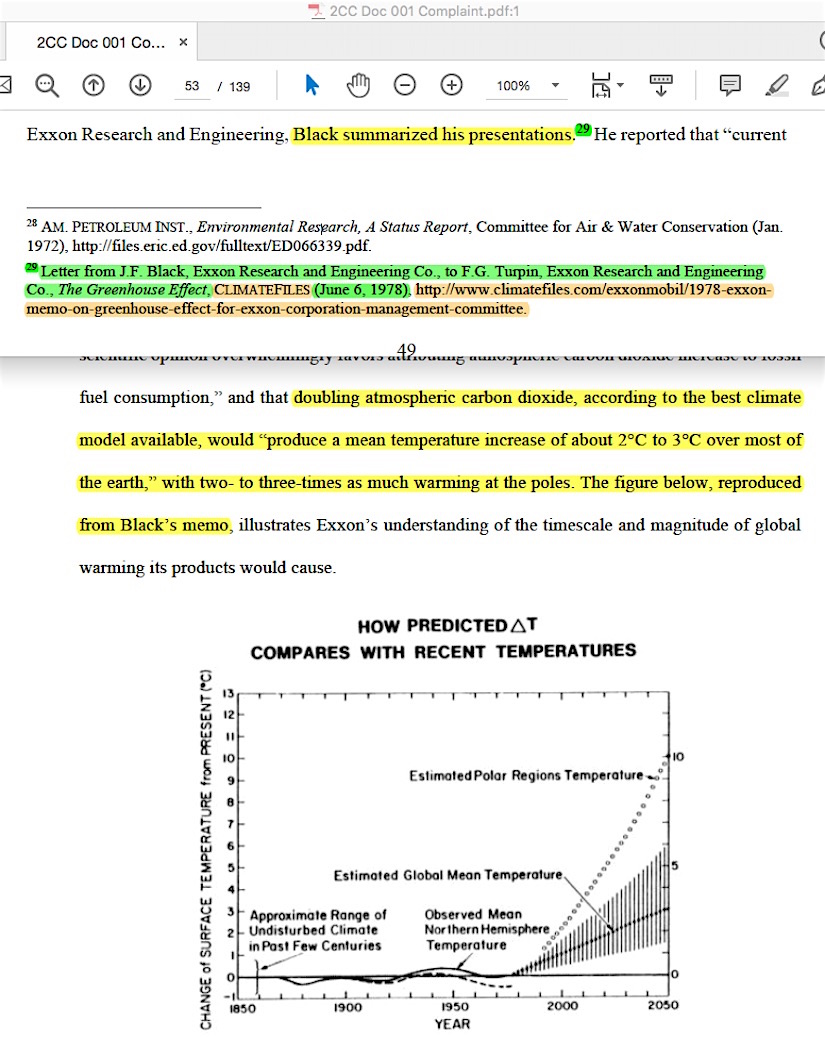 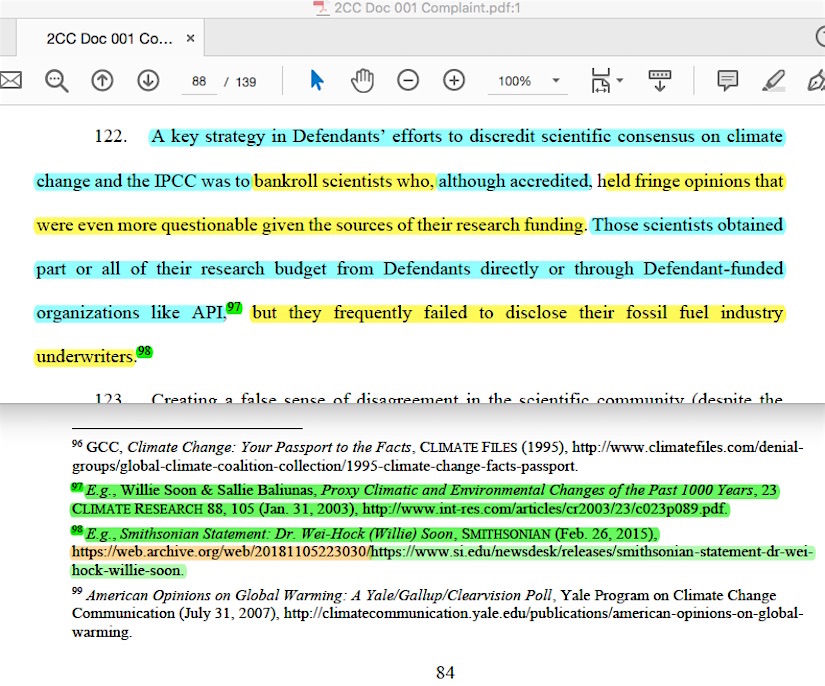 Boilerplate copy, Q.E.D. Well, almost. What does this Maui filing not get to share with its Honolulu neighbor or fellow island state Rhode Island? Reliance on critically missing words within a speech from President Lyndon Johnson in order to float the unsupportable idea that President Johnson “knew” about man-caused global warming in 1965. Compare Rhode Island, where I detailed the missing words problem and how it sources to Naomi Oreskes in the second half of my Rhode Island v. Chevron dissection … 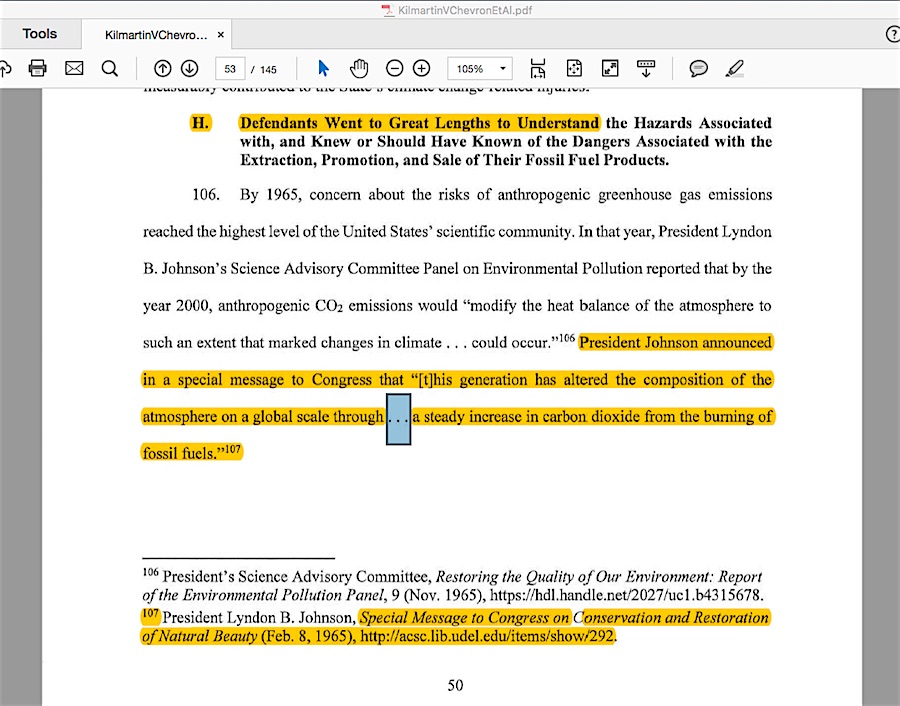 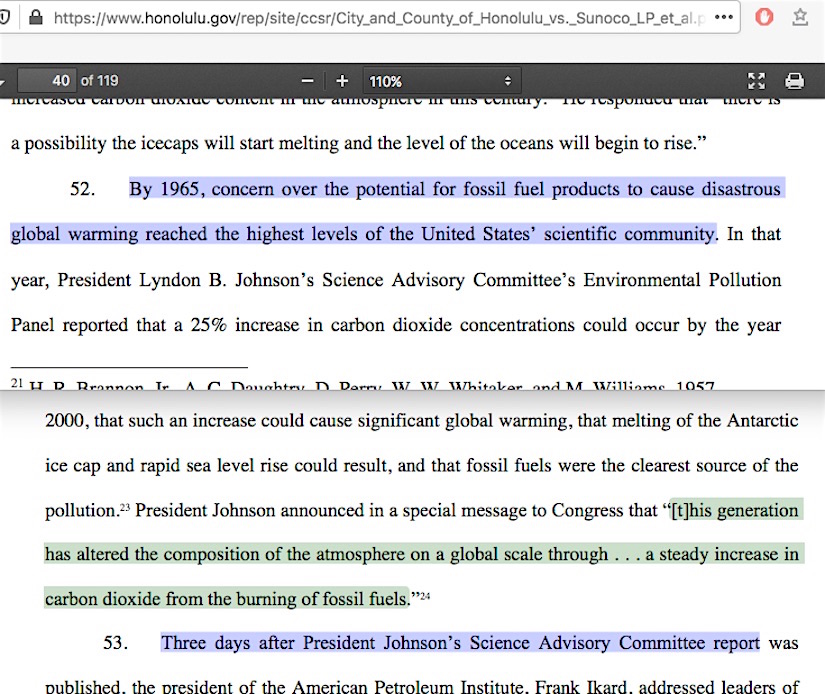 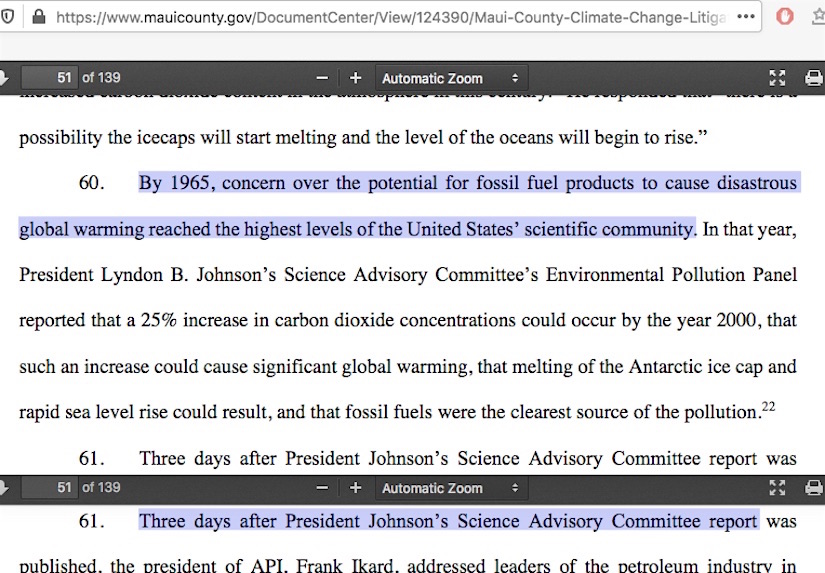 What’s up with that omission, why doesn’t Maui get to have that faulty claim? And how does it work out that Sher Edling’s Charleston v Brabham Oil, filed on 9/9/20 gets to have that problematic Lyndon Johnson 3 dots/missing words item in it, while the next-day-filed 9/10/20 Delaware v. BP does not?

Reporters who don’t adhere to the basic tenets of journalism want the public to believe there’s a “new wave” of these lawsuit filings, or a “mounting number / growing body” of them, or — only days after the filing of Maui v Sunoco — a “coming wave / recent swell” of these, each being above reproach with their content.

“Problems with the assertions in them?”, the reporters exclaim, “What problems? We don’t have time to fact-check these things, and besides, the story of organized denial has been well told and documented.” No, it hasn’t, it’s where that citation cascade problem rears its ugly head, pointing straight back to basically a single dubious source.

I’d argue that the latest growing problem is the sheer number of these lawsuit filings that all seem to share a common ingredients list. By my current count, however, an argument could be made that all of the fourteen Sher Edling boilerplate / assisted filings could be wadded up into one big single one, while the four Pawa-led ones could be consolidated into a single one as well (where possibly two of those might be transferred into the Sher Edling ball if their own announcement about two of the Pawa-led California filings is an indicator of that action). One plus one plus five ‘independently led’ lawsuits equals just seven — hardly definable as any sort of big wave. And since the D.C. v Exxon one that I’d formerly listed as ‘independently led’ was claimed as a Sher Edling one, what assurance do we have that the others that have far too similar of an appearance to Sher Edling’s filings won’t get vacuumed up into their giant single wad?

Then there’s this other problem with reporting about these lawsuit filings, nicely illustrated by the aforementioned “coming wave / recent swell” report:

The disinformation campaigns have since been corroborated by leaked internal memos, including one from the American Petroleum Institute’s Global Climate Science Communications team known as the “victory memo,” with victory defined as the public coming to “understand” the uncertainties of climate science.

No, they haven’t. That abject failure is instead what will potentially sink every one of these lawsuits while also exposing just who it is who put all their faith in the disinformation narrative about ‘leaked memos proving skeptic climate scientists colluded with fossil fuel industry execs to deceived the public about the harm of man-caused global warming.’

Reporters in the mainstream media would know that Titanic problem if only so many of them weren’t essentially unquestioningly repeating propaganda lines likely fed to them from the very people who are trying to keep all these lawsuits afloat.