Borrowing what I said at the top of my June 30, 2020 dissection of the 6/25/20 D.C. v. ExxonMobil filing, this apparently ‘independently led’ Connecticut v Exxon lawsuit (word-searchable version here) only crashes half as badly compared to the majority of the other global warming lawsuits, concerning worthless ‘leaked memos’ it relies on for its claim that the fossil fuel industry hired shill skeptic climate scientists to engage in disinformation campaigns.

Which memo set is it enslaved to? The worthless 1998 API “victory will be achieved” set, as seen in its Section A. “ExxonMobil Systematically and Routinely Used Disinformation as Part of its Campaign of Deception.” 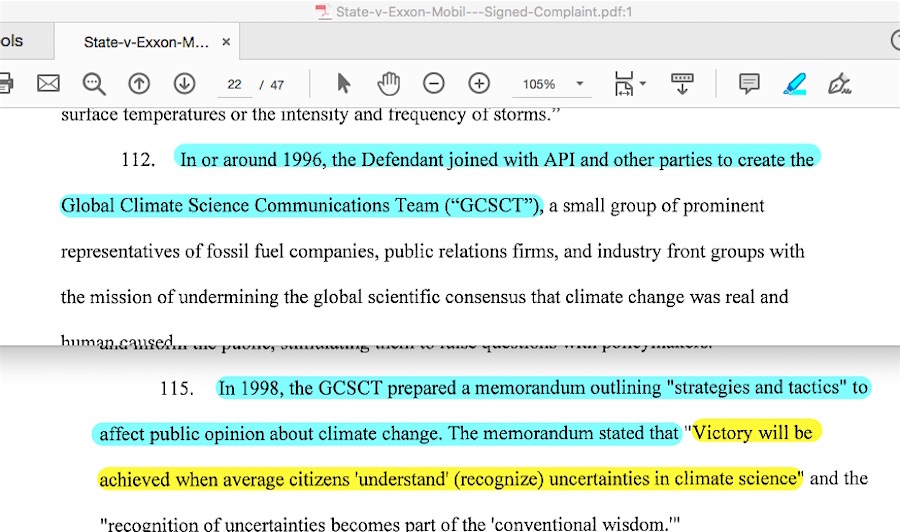 I’ll repeat two other bits from my dissection of D.C. v. ExxonMobil: That memo set is worthless as evidence of an industry-orchestrated conspiracy to deceive the public about the harm of man-caused global warming because, as I’ve noted within my Backgrounder post dissecting the outright worthlessness of this set, it was * and never implemented. Beyond that, the absurdity of attempting to portray the measurements for ‘achieving victory’ as a sinister corporate effort can be illustrated in a mirror flip of them into a perspective Greenpeace would say is not sinister at all.  [*Author’s 5/13/21 note: this is corrected/clarified here]

Why this filing chooses to skip the more viable-looking (albeit still equally worthless) “reposition global warming” ‘leaked memo set’ is a mystery, considering how the majority of the other global warming lawsuits rely on it. The people behind the ‘independently led’ Hoboken v. ExxonMobil put so much faith in it that they used it in their introductory section, besides featuring it later in the filing.

Does this Connecticut filing offer any new evidence for claims about fossil fuel industry disinformation campaigns that sets it apart from all the other global warming lawsuits?

Does it share any of the same old elements with the other lawsuits, adding to the appearance that there might be a common template of items to choose from that’s proposed by enviro-activists to City Attorneys and state Attorneys General?

In my September 25, 2020 dissection of Charleston v Brabham Oil, I showed how all of the Sher Edling boilerplate-similar lawsuits referenced a particular dubious “James Black Report, and further showed that not only does the Hoboken filing reference the “time window of five to ten years” quote from the Black Report, that line is also featured in the Matt Pawa-led King County filing, and in this Connecticut filing, in its Section IV. “ExxonMobil Knew Its Products Caused Climate Change”: 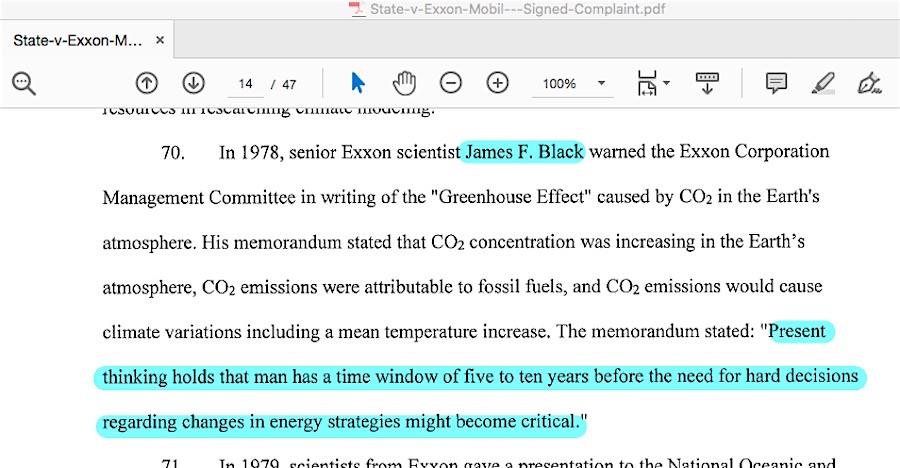 This Connecticut filing is not lengthy like all the other lawsuit filings, it’s only 45 pages, so this one particular “Exxon Knew” insinuation problem looms large within it. The WUWT guest post individual I referenced in my of Charleston v Brabham Oil dissection said the main graph in the Black Report was cartoonly absurd because the predicted temperatures presented to Exxon administrators were little more than wild guesses. How could the case be made that Exxon knew its products caused catastrophic warming when the guesses about polar temperatures in 1978 were not any better than guesses twenty years later about the Arctic being so warm that it would be ice-free by 2013? Yep, that latter prediction worked out well …… so far, the summer minimum extent coverages have been bigger after the 2012 lowest recent recorded minimum.

Then there’s that other problem with the “no evidence it was ever implemented” API memo being the ‘best available’ evidence in this filing for the notion that sinister corporate disinformation efforts to “reinforce doubt about established climate science” were utilized to target average citizen consumers, where they could be considered victorious after those consumers “understood and/or recognized the uncertainties — doubt — in climate science.”

Arguably, a problem may be revealed by asking what is not found in this Connecticut filing. Why does it not also rely on the notorious “reposition global warming” memos, like nearly all the other global warming lawsuits do? Was it perhaps proposed to the Connecticut AG’s staff, but was rejected? The Energy in Depth article on this filing notes that “Connecticut has been supported by or benefitted from the same group of activists and wealthy donors including Pay Up Climate Polluters …” What does Pay Up Climate Polluters say are smoking guns evidence – plural – for disinformation campaigns? The API “victory will be achieved” memo set and the “reposition global warming” memos. If no less than Al Gore says “Exxon Mobil has funded 40 different front groups that have all been a part of a strategic persuasion campaign to, in their own words ‘reposition global warming as theory rather than fact’,” shouldn’t that make this memo set worthy of inclusion into this entirely Exxon-centered lawsuit filing? Are the Connecticut AG’s staff ineptly unaware of all that supposedly damaging material, or were they smart enough to see all the holes in that material?

At a bare minimum, since this Connecticut filing provides no footnotes or end notes for any of its assertions, the Connecticut AG office should be asked what their sources were for the Black Report and for the “victory will be achieved” memo set. The 13 Sher Edling lawsuit filings cite Kert Davies’ Climate Files website for that report. Pay Up Climate Polluters cites Kert Davies’ Climate Investigations Center for the “victory will be achieved” and “reposition global warming” memo sets.

Kert Davies, who has a history of not liking Exxon very much. If one of his Climate Investigations Center blog posts is an indicator of it, he may have gotten the Black Report from a particular public library’s Exxon Archives collection. Davies has other such Exxon documents at his Climate Files website, for example, a “Greenhouse Effect Assessment” proposal by Exxon’s own Edward Garvey in 1979. Garvey, at his October 2019 witness appearance as an “Exxon Knew” expert at the House Committee on Oversight and Reform’s “Examining the Oil Industry’s Efforts to Suppress the Truth about Climate Change” hearing didn’t cite Climate Files as the source of his own report in his written statement, he said “A copy of the presentation from the Exxon archives at the University of Texas-Austin is attached.” By the way, he mentioned Exxon’s James Black in that same written statement.

Inquiries need to go beyond finding out when and how Kert Davies’ became aware of the Exxon Archives. Regarding his “Greenpeace USA née Ozone Action” tenure, the two questions that should be asked are where Greenpeace got the “victory will be achieved” memo set, and how Ozone Action “obtained” the “reposition global warming” memo set.