You could hardly ask for a better example of psychological projection than believers of man-caused global warming claiming their critics spread misinformation. I give you examples of the exact opposite, all of which point squarely to the core piece of misinformation at the political heart of the issue.

Witness the following – arguably from a really obscure book – but a great illustration of outright misinformation nevertheless (screencapture here of the body text and footnote 71):

… The story of organized denial has been well told and documented, and I will not repeat it here.71

Now watch what happens the sources are examined in detail rather than taken at face value:

It is easy to pile on. From another obscure book, we see the same single-source problem in the same false premise assertion. Click on the image to enlarge it – Greenpeace/Hoggan/Gelbspan:

Ditto – one with Oreskes / Conway, Dunlap / McCright, and Sharon Begley. 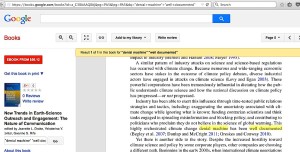 No need to look for this material in obscure books, it can be found across the internet. Vary the wording to convey the same concept, and it becomes readily apparent just how widespread the talking point is about ‘well documented organized climate denial.’ A 2012 report from the Union of Concerned Scientists says as much….. citing the same same people who are singly enslaved to Ross Gelbspan’s accusation

Wait for it:  soon people will soon cite the Union of Concerned Scientists directly as having ‘well documented’ the corruption of skeptic climate scientists…. when the UCS just days ago did little more than copy ‘n paste an uncited old “Greenpeace USA née Ozone Action” PDF file that is the core piece of evidence in Gelbspan’s accusation – a piece of non-evidence taken entirely out of context and twisted into something it absolutely is not, proof of a sinister industry strategy to pay scientists to lie to the public and push climate assessments all know to be false.

This situation exposes a far larger problem than any kind of science assessment debate quandary. This is all about people who accuse others of using misinformation to further an agenda, who have every appearance of either deliberately, or via egregiously inexcusable ignorance, misinform all about their critics. Call it the proverbial ‘big lie’, if you will, a fundamentally indefensible tactic employed so far with much success by global warming believers. However, challenge any one of them to come up with an independent corroborator of Gelbspan’s accusation that skeptic climate scientists are hugely paid and instructed to lie, and they fold like cheap suits. Challenge any one of them to show any instance where Gelbspan himself provided physical evidence for the conspiracy he pushes, and they fold like cheap suits.

Challenge Gelbspan directly and any others appearing to be involved with the earliest smear efforts – a golden opportunity for open minded reporters or congressional investigators – and they will fold just the same way. The more entertaining possibility here is how any of those accusers might turn on each other to save their own skins.