It doesn’t take more than a few seconds of internet searching to discover how the Oregon Petition Project had over 31,000 signers, corroborated not only at the Home Page of the website for the petition itself, but also at sites highly biased against it such as Wikipedia and Desmogblog (that Desmog). But as I showed in my Part 1 dissection of that lawsuit, the District of Columbia Attorney General Karl Racine’s lawsuit only placed the number at 17,000, with no citation source for that number.

Where could that hugely outdated figure originate?

At the end of my Part 1 post, I suggested that maybe a hapless intern simply relied on a document from Kert Davies’ Climate Files site, since he’s already seen as a source that other global warming lawsuit handlers cite. A bit farther up in that post, I offered a screencapture of a 1998 letter to the New York Times containing that 17,000 signatories figure written by his long-ago boss, the same person seen more recently as a fellow apparently anti-Exxon effort collaborator and funneler of mega-dollars.

There’s one other particularly distinct source, one that I had forgotten about. It doesn’t look good for District of Columbia Attorney General Karl Racine, and only leads to more questions than answers on how distinctive shared wording ends up in these kinds of lawsuits.

In a chance correspondence with a candidate who’d just won her June 30 Colorado primary election, I alerted her to the potential leadership opportunity of questioning the jointly filed 2018 Boulder City/County / San Miguel County v. Suncor Energy, Exxon lawsuits, and in re-reading my own dissection of those, the dead wrong “17,000 scientists” figure is seen in that trio of filings, in an almost word-for-word version of the passage now in the D.C. lawsuit. 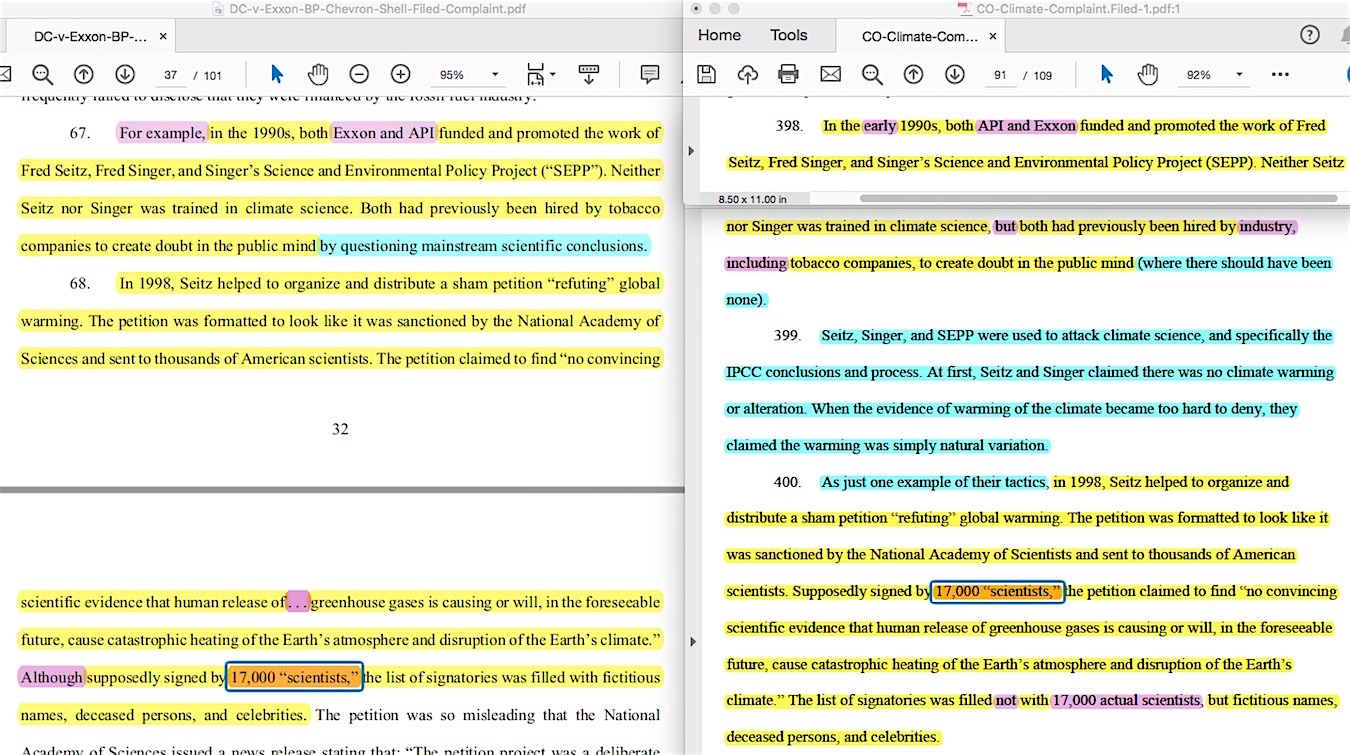 Drop those two passages into the DiffNow site’s comparator, and it’ll show what I highlight above. The writers of the D.C. lawsuit seemingly lifted that whole passage out of the Boulder trio, dropped the turquoise-highlighted #399 paragraph in favor of the words “by questioning mainstream scientific conclusions” while adding a three-dot ellipsis and making the other very minor changes I highlight in purple.

Neither the D.C. lawsuit nor the Boulder trio provide any citation sources for their incorrect “17,000 scientists” figure or any of their other claims. Lawsuits do regularly cite prior lawsuits, no harm there when they make the effort to attribute the sources properly. At a rock bottom minimum, this looks like the sloppy work of a legal intern, perhaps too lazy to independently come to this conclusion or to at least reword the passage much more effectively to disguise where it came from.

Since the Boulder trio got the “17,000 scientists” figure spectacularly wrong, I offered some speculation in my dissection of that trio about its origins. One possibility is yet another global warming lawsuit, the 2008 Kivalina v Exxon one led by attorney Matt Pawa. What was Pawa’s source for the “17,000 scientists” figure? To his credit, he first noted that the figure was spoken in 2000 by then-CEO of Exxon, Lee Raymond. In rebuttal, Pawa first offered the following from an April 1998 New York Times report, which has wording looking similar to what appears in the days-old D.C. lawsuit — with one glaring exception: 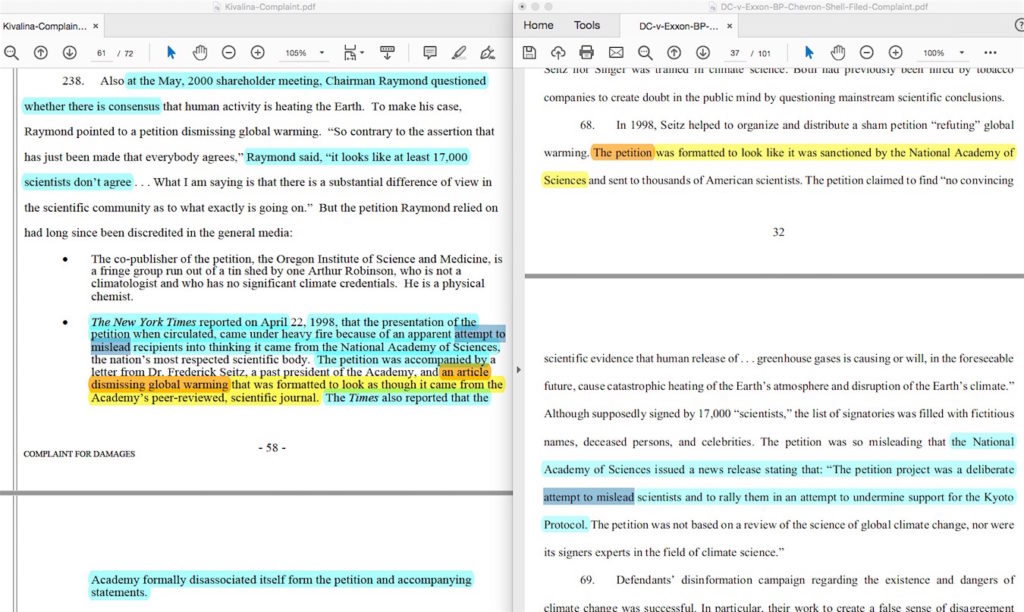 The NYT report,* actually dating from April 26, states that the National Academy of Sciences objected to the format of an article accompanying the petition that supposedly looked like NAS articles, not the format of the petition. (*NYT‘s report itself only mentions the petition briefly, and the rest of it concerns an unnamed leaked industry memo, which has huge problems concerning who first discovered it).

Pawa’s old Kivalina v Exxon also had a source, immediately after its bit on the “17,000 scientists,” regarding the ‘fictitious names .. and celebrities’ that the D.C. lawsuit alludes to. Pawa’s source for that is a May 1998 Associated Press article:

The AP article, actually dating from a day earlier, is a little more specific on the ‘names’ ….. and who ‘discovered’ them. 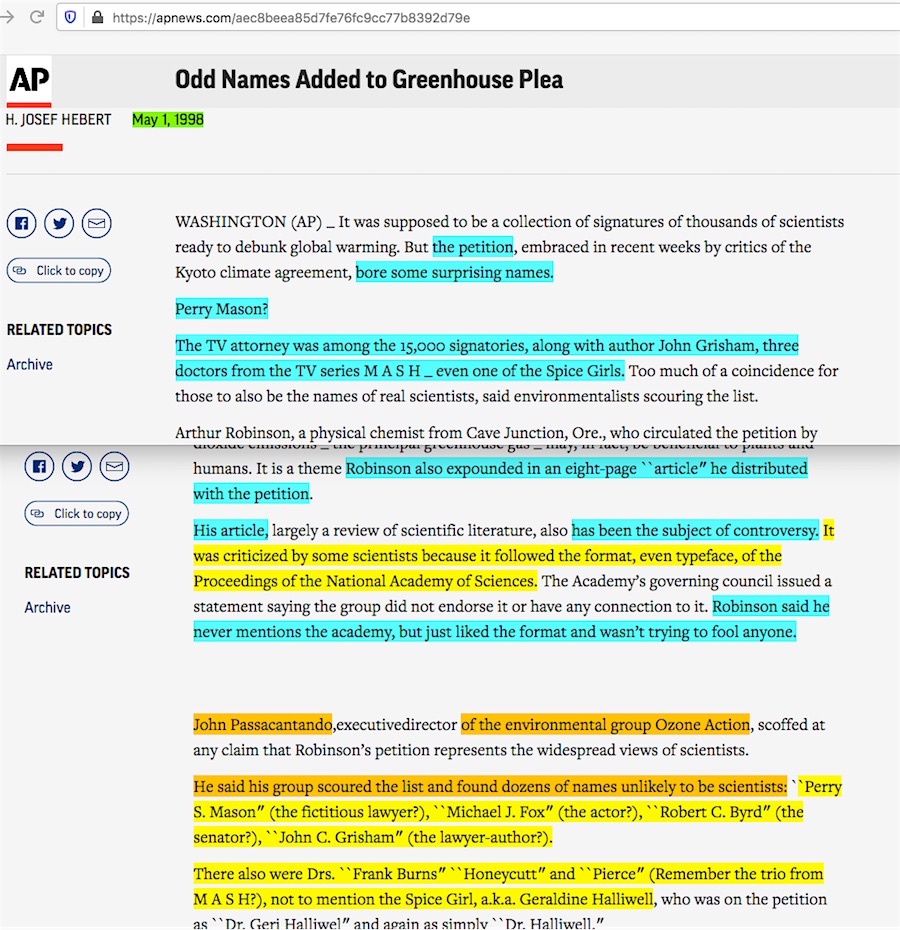 I must remind everyone that my March 29, 2016 blog post detailed how it turns out there was only pure supposition beyond one fake name in the petition. But does the wording in the Associated Press article look familiar? Have a look again at the screencapture I had near the top this post of the 1998 letter to the New York Times, only now let’s all look at it with key words highlighted: 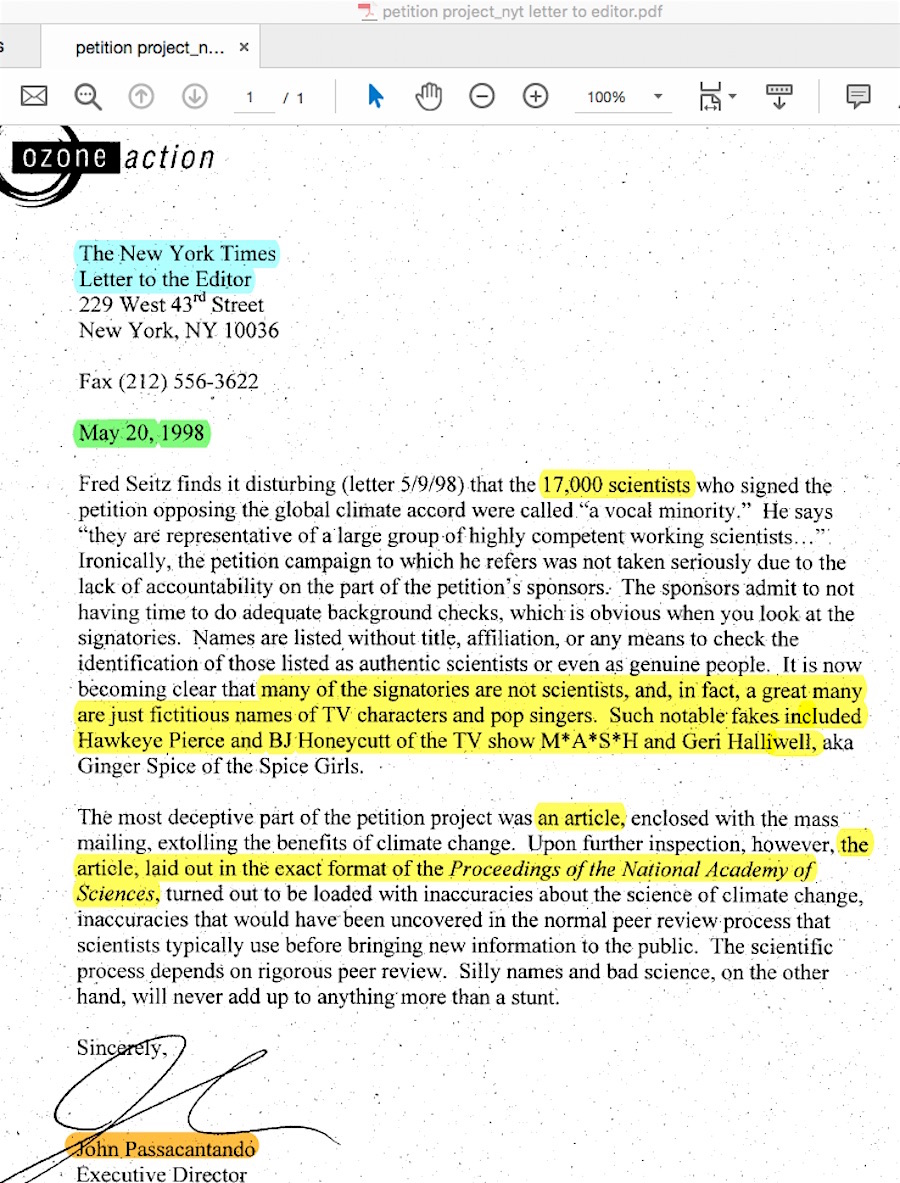 Yes, once again, this is that John Passacantando of Ozone Action, the same little group that gave the worthless “reposition global warming” ‘leaked memos’ their first major media traction after he and Ross Gelbspan magically ‘obtained’ those memos, which were used by global warming lawsuits like Kivalina v Exxon and the days-old Minnesota vs. API, Exxon, but oddly not in ones like D.C. v Exxon; the same Passacantando whose major associate at Ozone Action was Kert Davies, and at Greenpeace after Passacantando merged Ozone Action into it; the same Greenpeace that trumpeted its role of receiving the (worthless) ‘leaked’ API “victory will be achieved…” memos, which were also used by global warming lawsuits like Kivalina v Exxon and are used the days-old D.C. v Exxon one; the same Kert Davies whose Climate Investigations Center’s Climate Files ‘platform’ is used by the Sher Edling law firm that’s handling the Honolulu v Sunoco, Exxon lawsuit and nine other identical ones; the same Sher Edling law firm that’s lending a hand to this D.C. lawsuit; …….

…. and to repeat from the second paragraph at the top of this post, the same John Passacantando recently partnered up with Davies in efforts to portray Exxon as a corrupt organization; the same Passacantando apparently revealed to be funneling mega-dollars, nearly five million if not more lately, into Davies’ CIC organization.

No matter how these ‘Exxon and other oil companies funded/orchestrated disinformation campaigns‘ lawsuits show up, they end up in the same circles around worthless ‘leaked memos’ evidence pushed by the same tiny circles of associated promulgators.

How did the faulty “17,000 scientists” figure actually end up in this D.C. v Exxon lawsuit?

Does nearly five million dollars also purchase efforts to ensure the worthless old insinuation of ‘uncountable numbers of fake names’ in the Oregon Petition Project get inserted into the latest global warming lawsuits?

Examiners with far more investigative resources and power than I have will be able to get to the bottom of this. When they do, the potential revelation about efforts to plant a fake name in a science petition could potentially open a Pandora’s Box about the history of the tactics and faulty / highly questionable accusatory narratives used by that same tiny circle of enviro-activists to steer the public away from taking assessments from skeptic climate scientists seriously.