… we can keep the inconvenient truths buried. In digging further into this situation, I see an entertaining irony concerning one of the latest global warming lawsuits and the old worthless 1998 American Petroleum Institute (API) “Victory will be achieved …” leaked memo, and I now see something in my work that needed to be corrected (sort of – it isn’t helpful to the people’s actions I dissect).

First, let’s recap a couple of key detail points from my previous blog post on this API memo:

Now, what I had to fix in my prior blog post was my incorrect assumption about Greenpeace’s scans of the memo being in an Appendix attached to their 2002 “Denial and Deception” report. Greenpeace actually undercuts James Hoggan about where their first ‘publication’ of the memo appeared – not in their 2002 “Denial and Deception,” but in their August 1998 “The Oil Industry and Climate Change,” where their scans of the memo are very hard to read, and where they make no claims about their role in “discovering” it.

Is there something to Hoggan’s other claim about Greenpeace? A 2013 Desmog article echoed that claim, “uncovered and documented by Greenpeace,” while pointing to a different Greenpeace report, “Dealing in Doubt,” which was first published in 2010. Greenpeace’s 2013 rehash of that report only offers a link to their scans of the memo (pg 16). Their original 2010 publication version, however, seemingly vindicates Hoggan’s claim about them “discovering” it with three additional words (pg 9):

The plan they drew up, leaked to Greenpeace, proposed: …… ‘Victory will be achieved when …..’

As I illustrated in my prior blog post, the boilerplate copy Sher Edling global warming lawsuits oddly link to scans of the API memo (most recently in their latest Pacific Coast Federation of Fishermen’s Associations Inc. v. Chevron case) which are devoid of any source, when there is a nearly identical link identifying ex-Greenpeace figure Kert Davies as the contributor. If Greenpeace really was the first to put out the actual API memo in full text form, that might explain why the lawsuits are using Davies’ scans, but the mystery remains regarding why they don’t directly credit Greenpeace.

Problem is, the James Hoggan / Greenpeace claims are still totally contradicted by what was stated in the NYT April 26,1998 “Industrial Group Plans to Battle Climate Treaty” article about the National Environmental Trust (NET) leaking the memo. What happens if an intensive search is undertaken to see how the NET was involved?

You find this old archive internet press release from the NET itself, placed online the same day the NYT article was published: 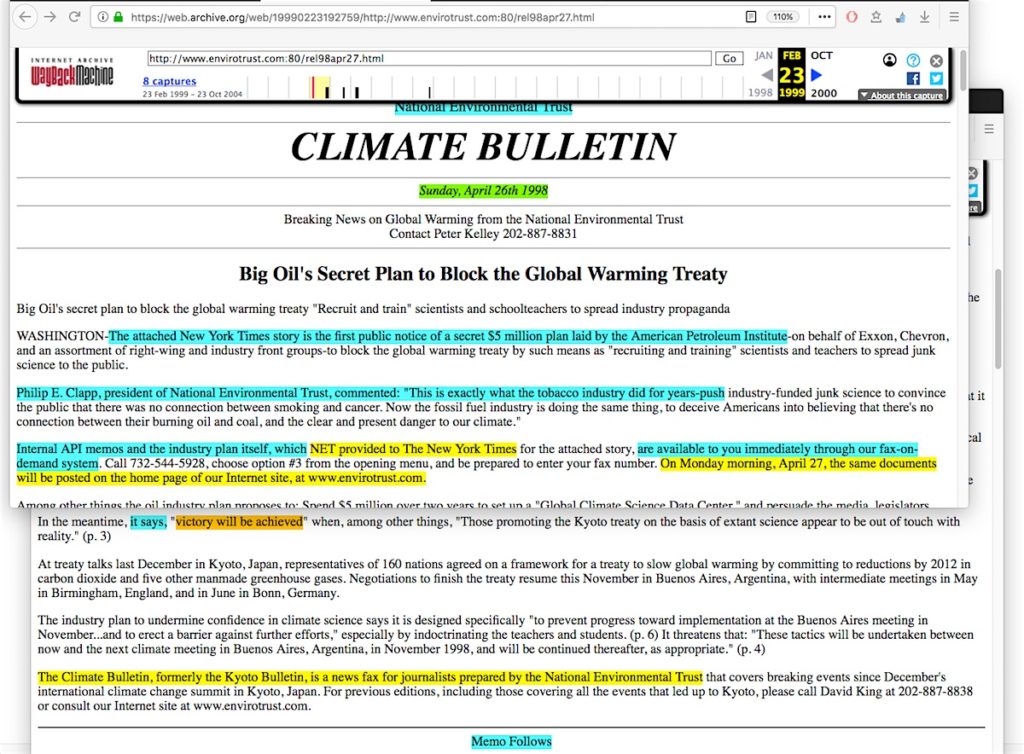 That’s inconvenient for both James Hoggan and Greenpeace, because the only way for Greenpeace to have made the memo available for public viewing first would have been if they had put it out before the NET did.

Meanwhile, there is another monstrous current irony to this entire situation. Yes, it would be a bit of a distraction for the Sher Edling global warming lawsuits to refer to the Internet Archive site to display the text of the memo; many people aren’t aware the site exists or might be confused about how long-lost website pages are viewed within it. Why not instead refer to a straightforward current online transcript of the API memo ……. such as the one dating as far back as 2001 at the Pacific Coast Federation of Fishermen’s Associations Inc page? 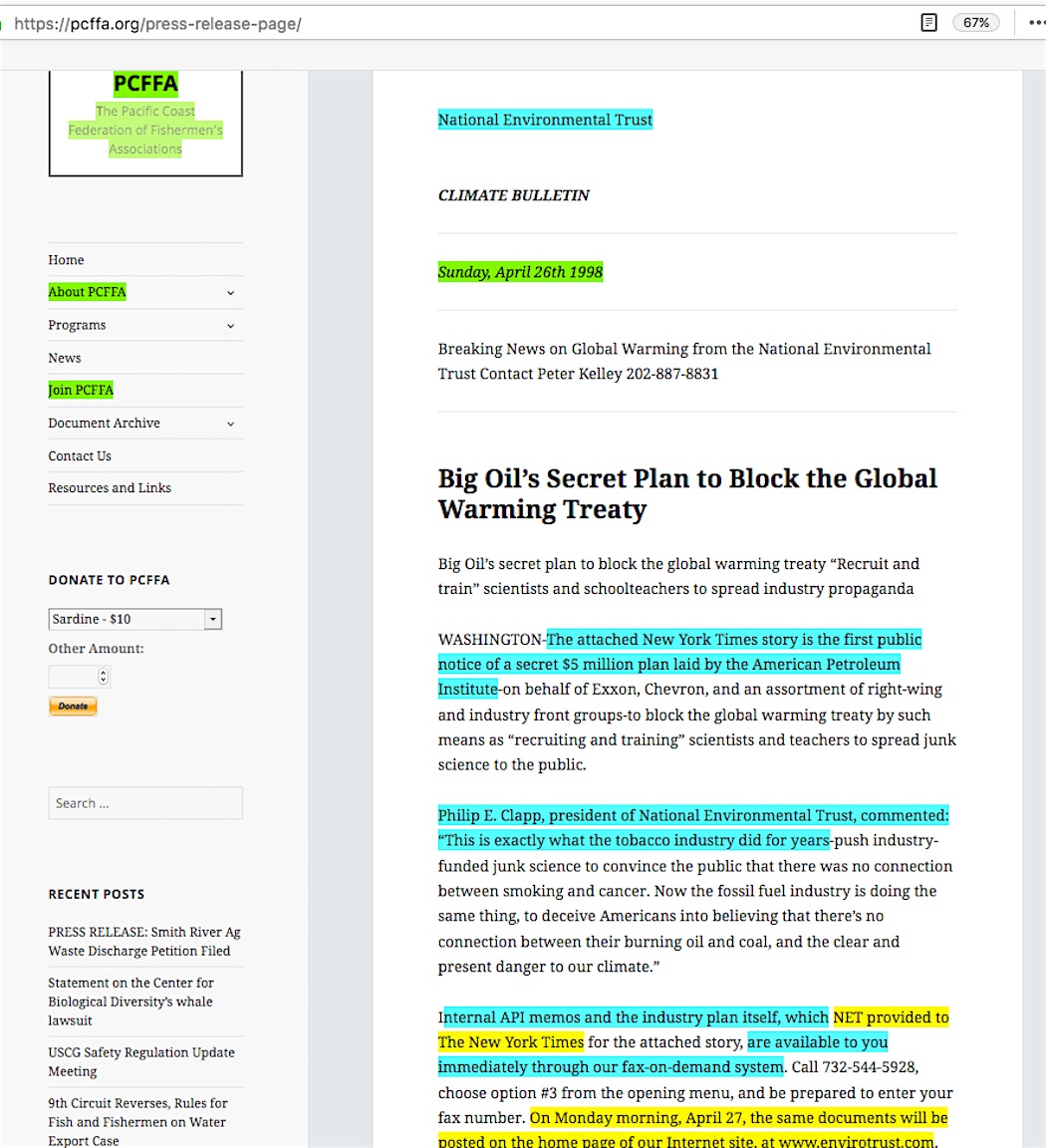 Once again, instead presenting the world with bulletproof evidence of the fossil fuel industry colluding with shill skeptic scientists to spread false global warming information, we have ever-deepening problems surrounding this particular API “Victory will be achieved” angle of the accusation and the core people involved in efforts to promulgate it.
————————————————————————
Part 3: what’s up with James Hoggan suggesting an easier-to-read text-only version is seen at some Dutch site run by a user named “E Wesker”?