Unlike Minnesota vs. API, et al. which I dissected only days ago in my prior blog post, this DC v Exxon et. al lawsuit only crashes half as badly concerning worthless ‘leaked memos’ it relies on for its claim that the fossil fuel industry hired shill skeptic climate scientists to engage in disinformation campaigns. It still completely crashes on that angle nevertheless. Here’s how.

Its main evidence for that claim is only the notorious-but-still-worthless 1998 American Petroleum Institute “victory will be achieved…” memo set, which appears within the “Defendants Used API to Deceive Consumers” section on page 32 (PDF file page 36) of the filing: 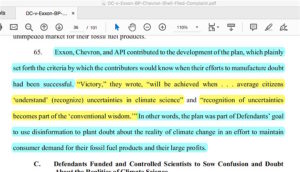 Exxon, Chevron, and API contributed to the development of the plan, which plainly set forth the criteria by which the contributors would know when their efforts to manufacture doubt had been successful. “Victory,” they wrote, “will be achieved when . . . average citizens ‘understand’ (recognize) uncertainties in climate science” and “recognition of uncertainties becomes part of the ‘conventional wisdom.’” In other words, the plan was part of Defendants’ goal to use disinformation to plant doubt about the reality of climate change in an effort to maintain consumer demand for their fossil fuel products and their large profits.

That assertion is worthless because, as I’ve noted in every one of my blog posts on global warming lawsuits referencing that API memo set, and within my Backgrounder post dissecting the outright worthlessness of this set, it was unsolicited and never implemented.

There is no way Exxon, Chevron, or any other energy company — or even by American Petroleum Institute, for that matter — could have operated under that “plan” if it was in a landfill for nobody to use. Even if they did, the rejected set of “victory” measurements used to ascertain whether the public is fully aware of the skeptic side of the issue give absolutely zero indication that the intent of the measurements was to show how the public was conned by false climate assessments. I illustrated this absurdity of attempting to portray the measurements as sinister with a lengthy mirror flip of them that Greenpeace would love in my first post in a four-part series on this worthless API memo.

The notion that the 1998 API memo, regardless of its status, is a document proving sinister disinformation efforts exist is simply ridiculous.

While the lawsuit chooses not to rely on the seemingly more viable “reposition global warming” memo set, like Minnesota vs. API, et al. does to indict skeptic scientists and industry executives of collusion, DC v Exxon immediately makes other literally unsupportable assertions right after its claims about the API memo set. In “Section C. Defendants Funded and Controlled Scientists to Sow Confusion and Doubt,” we see this (red numbers are my addition): 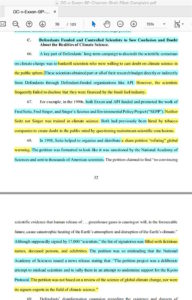 A key part of Defendants’ long-term campaign to discredit the scientific consensus on climate change was to 1) bankroll scientists who were willing to cast doubt on climate science in the public sphere. These scientists obtained part or all of their research budget directly or indirectly from Defendants through Defendant-funded organizations like API. However, the scientists 2) frequently failed to disclose that they were financed by the fossil fuel industry.
… 3) both Exxon and API funded and promoted the work of Fred Seitz, Fred Singer, and Singer’s Science and Environmental Policy Project (“SEPP”). 4) Neither Seitz nor Singer was trained in climate science. Both had previously been 5) hired by tobacco companies to create doubt in the public mind by questioning mainstream scientific conclusions.
In 1998, Seitz helped to organize and distribute 6) a sham petition “refuting” global warming. The petition was formatted to look like it was sanctioned by the National Academy of Sciences and sent to thousands of American scientists. … Although supposedly 7) signed by 17,000 “scientists,” the list of signatories was 8) filled with fictitious names, deceased persons, and celebrities. The petition was so misleading that the National Academy of Sciences issued a news release stating that: “The petition project was a deliberate attempt to mislead scientists and to rally them in an attempt to undermine support for the Kyoto Protocol. 9) The petition was not based on a review of the science of global climate change, 10) nor were its signers experts in the field of climate science.”

Claims by the National Academy of Sciences and others that there are zero scientist signers having climate science expertise in the Oregon Petition Project are ludicrous, a tactic designed to distract the public away from realizing that highly educated science people signed it because they fully understand how the Scientific Method works and objectively question the conclusions of IPCC climate reports and the methodology the IPCC used to gather its information.

The question on that last bit is whether this DC v Exxon et. al lawsuit is simply trusting the decades-old assertion from the National Academy of Sciences, or was an effort made to corroborate that assertion?

But a larger question looms, made all the more obvious by this DC v Exxon et. al lawsuit’s total lack of supporting foot notes or endnotes for its claims: Did anyone at the D.C. attorney General’s office do any independent research into these claims or accusations, or is the lawsuit relying completely on sets of talking points supplied by unnamed others? Is there any hint within this lawsuit on who might have provided information about the worthless old API memo or those other ‘crooked skeptics’ talking points? 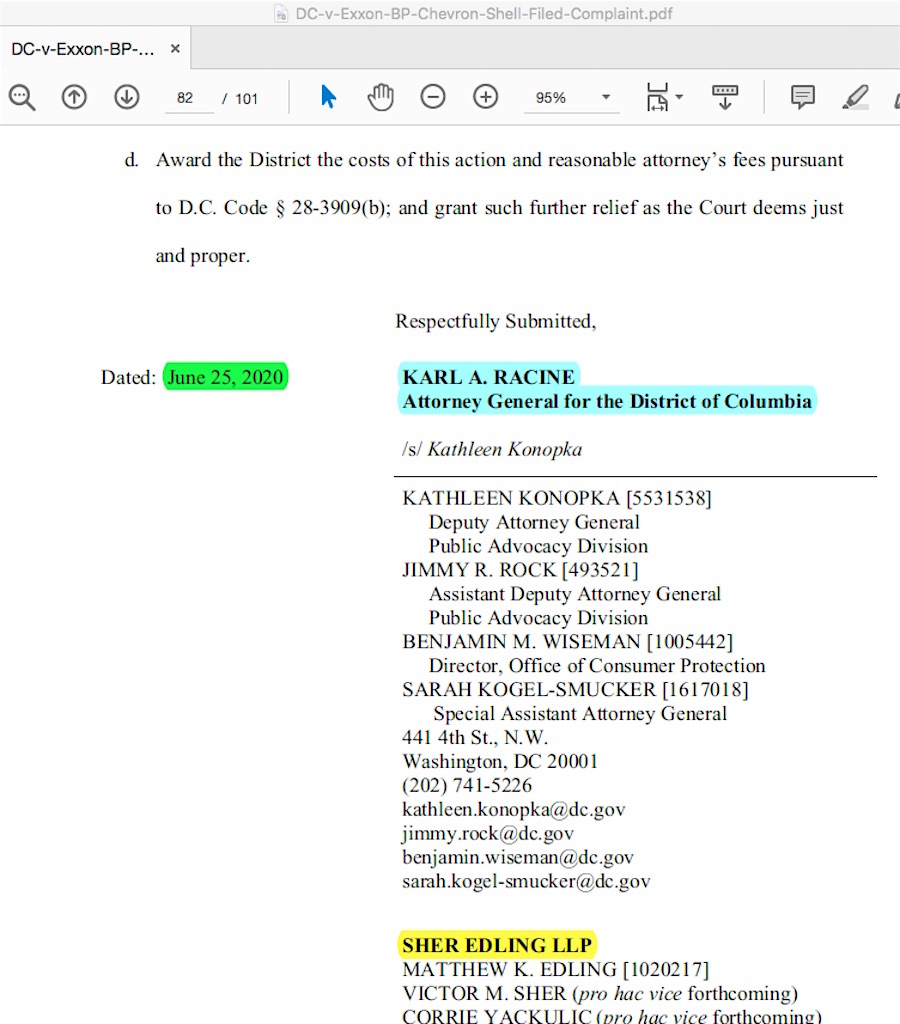 Yes, that Sher Edling law firm,** the one handling ten other municipality global warming lawsuits, including the most recent Honolulu v. Sunoco one which I dissected in my March 19, 2020 blog post; the same Sher Edling firm that directly taps Kert Davies’ ‘platform’ used by his Climate Investigations Center organization. That Kert Davies, whose Climate Investigations Center Twitter page prominently features the old 1998 API memo in its header photo. Where would the comically outdated “17,000 Oregon Petition signers” figure be seen by not-especially-bright interns at either the offices of Sher Edling or the D.C. Attorney General’s offices? How about within documents provided by Kert Davies’ Climate Files? This is the same Kert Davies who I detailed in my prior blog post and many prior times as having serious problems in association with the worthless memo set this DC v Exxon et. al lawsuit chose not to rely on.

From all that looms the same larger question I asked at the end of my dissections of the Honolulu and Minnesota lawsuits, as it relates to the exposé of Kert Davies and his former boss receiving millions of dollars of dark money: