Near the middle of my June 17, 2020 Part 1 blog post about the Oreskes / Santer problem, I showed a screencapture of Ross Gelbspan’s connection with the tale concerning atmospheric scientist Ben Santer’s questionable alterations of an IPCC report, and then showed featured another screencapture of a different tale in a major in a major national magazine article which had Gelbspan’s favorite ‘leaked memos’ accusation separated only sentences away from the ‘Santer attack.’

That wasn’t the only major article written at that time in that particular manner.

First for comparison, have a look again at the December 16, 1996 The Nation article’s passages about Santer and the “reposition global warming as theory” leaked memo phrase. 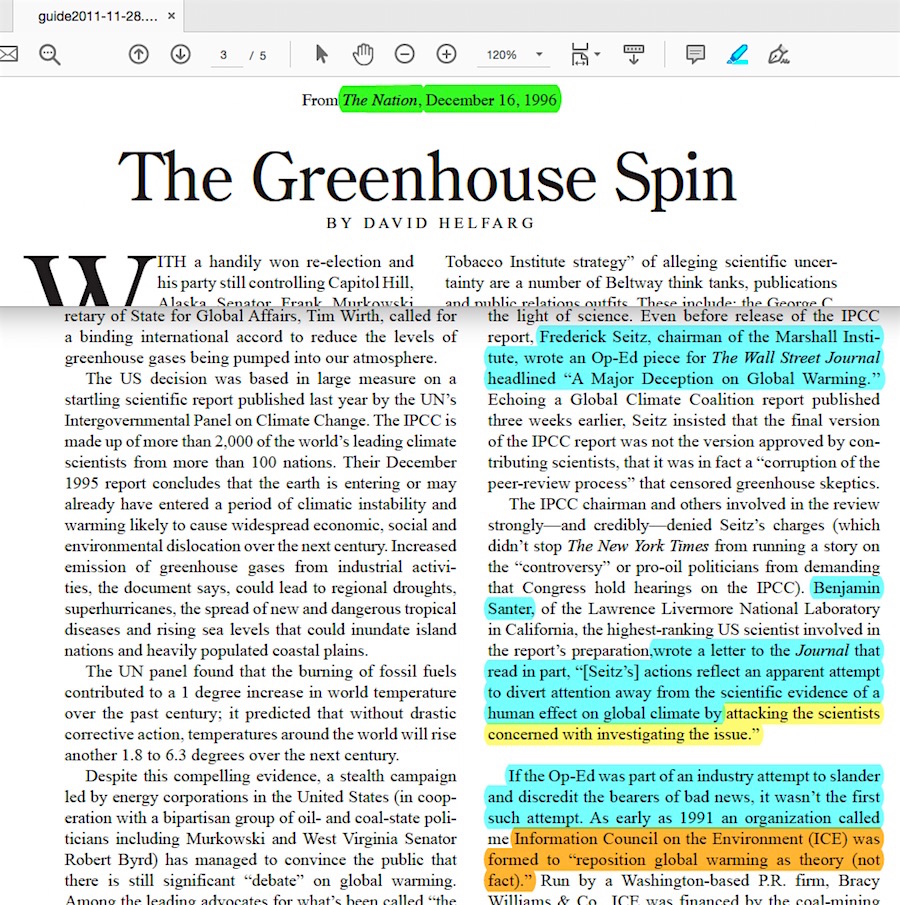 It was published a year before Gelbspan made the phrase internationally famous in his “The Heat is On” book, but it was only months after he and the old Ozone Action group magically ‘obtained’ those memos.

Now, compare what was seen at The Nation in December 1996 to this August 1996 Physics Today “Attacks on IPCC Report Heat Controversy Over Global Warming” article (unfortunately only viewable as photo scans – 1st page here, 2nd here) which tells the overall story of Ben Santer’s role in altering the IPCC Chapter 8 text and the outcry from critics about that situation. I highlight the relevant connection here (the orange color box is in the original article): 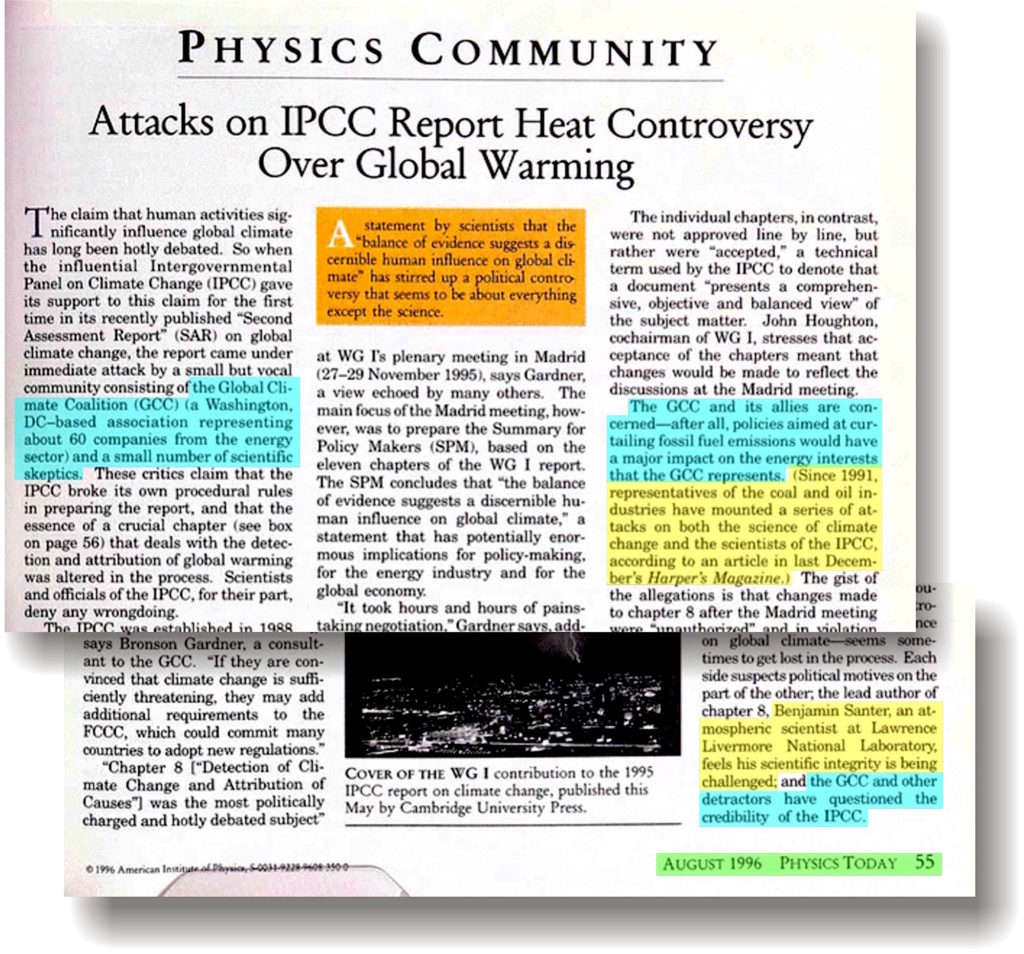 Basically, the tale boils down to the good guy scientist – Ben Santer – and the bad guys – the Global Climate Coalition (GCC) and its allies in the fossil fuel industry. How do we know the GCC are the bad guys? This Physics Today said they attack both the science and its scientists … “according to an article in last December’s Harper’s Magazine.”

What article is that? It’s “The Heat is On: The Warming of the World’s Climate Sparks a Blaze of Denial” by guess who? Ross Gelbspan. 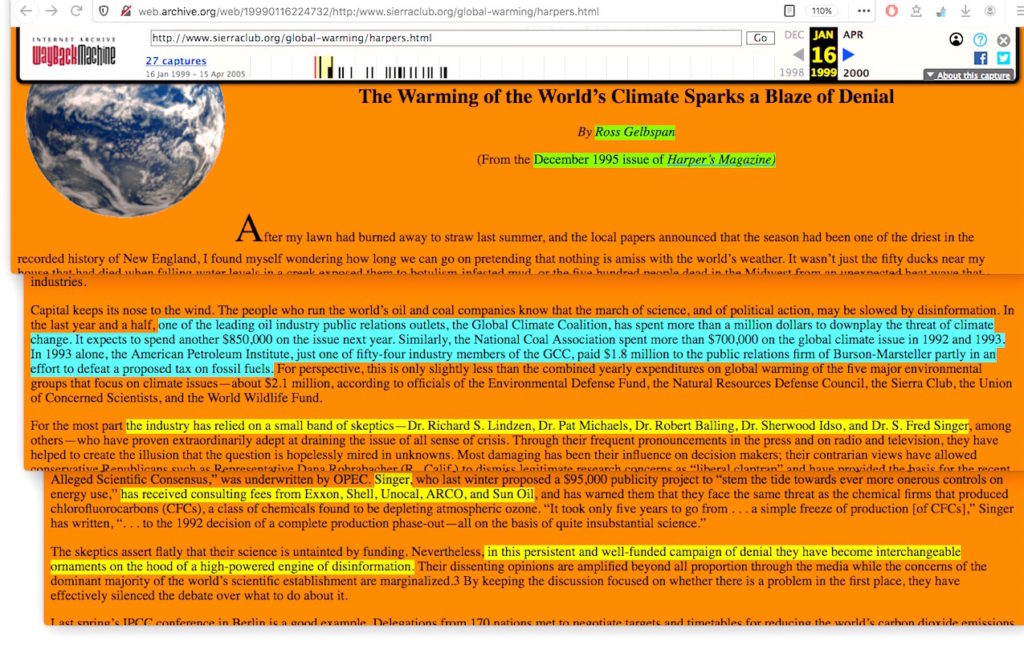 Keep in mind, Gelbspan described in his 1997 “The Heat is On” book how he personally attended the 1996 U.S. Global Change Research Program day 2 seminar on the Santer / IPCC SPM discussion where Ben Santer was harshly questioned about his alteration to the ‘final’ IPCC report by GCC representative William O’Keefe and Donald Pearlman, a rep for “undisclosed coal and oil producers.” Gelbspan typo’d the date of briefing as being a year earlier than it was in his book’s notes section, but from that error, we now are led to wonder if a quote seen later in Gelbspan’s book from Pearlman is also a typo, or did Gelbspan actually speak directly to Pearlman back in early August 1995?

Also keep in mind that Ross Gelbspan has stated that he was fully retired from the news media in 1992, and within a questionable timeline spanning from just mid-March 1995 to mid-May 1995, he switched from being an believer in man-caused global warming to a skeptic and back again to a believer when he was mysteriously alerted about and personally attended a Minnesota Public Utilities hearing where skeptic climate scientists disclosed their funding.

How does it work out that a private citizen retiree would …

Or if Gelbspan did typo the date of the phone interview and it was actually August 7, 1996, did Gelbspan’s knowledge of who Pearlman was come from the perks of being somehow associated with “Greenpeace USA née Ozone Action,” the little group that was gathering material about Pearlman as early as perhaps June 1996, the same little group seen sometime in 1996-’97 partnering with him in mysteriously ‘obtaining’ the infamous set of leaked “reposition global warming” / “lower income males” memos that are a cornerstone of the currently weeks old Minnesota v API, Exxon global warming lawsuit’s efforts to claim skeptic climate scientists colluded with fossil fuel industry officials in deliberate disinformation campaigns?

Naomi Oreskes is entangled** in this. Who did she cite within her “Merchants of Doubt” book’s lengthy Chapter 6 on “The Denial of Global Warming,” regarding the ‘attack’ of Ben Santer by William O’Keefe and Donald Pearlman? Ross Gelbspan — and notice also in that screencapture that Oreskes cited a part of anthropologist Myanna Lahsen’s 24 page book chapter devoted to the topic of Santer’s notorious alteration of words within the IPCC Chapter 8. That book chapter contained the same Santer situation – word-for-word in some passages – that Lahsen detailed in her 1998 PhD dissertation.

Oreskes has cited Lahsen’s PhD dissertation at least as far back as 2007 and in multiple other instances in other publications, but didn’t go straight to the original source for her above citation in “Merchants of Doubt” about the Santer ‘attack’ event. Lahsen’s 24 page book chapter does include a mention of Ross Gelbspan and the notorious “Information Council for the Environment” PR campaign, but not the the “reposition global warming” / “older, less-educated males” / “younger, lower-income women” strategy / targeting memo phrases which are falsely attributed to the ICE campaign. However, readers can’t miss them in her PhD dissertation, or miss her November 1995 personal meeting with Gelbspan … who, by the way, never won a Pulitzer.

[** Author’s 11/11/20 addition: Oreskes’ “Merchants of Doubt” co-author Erik Conway is also entangled in this. Prior to the 2010 publication of their book, Conway published his own “Atmospheric Science at NASA: A History” book, where he briefly detailed the so-called ‘attacks’ on Ben Santer. Who were his sources on the ‘attacks’ details? Ross Gelbspan and William Stevens, whose source for his own tiny bit about Santer is …… wait for it ……….………. Ross Gelbspan.]

I offer no answers to this whole situation, but I can point to obvious questions that are in serious need of answering.

What possible mechanism propels a years-retired reporter to be “the only reporter in the room” at a very obscure May 1995 Public Utilities hearing where skeptic climate scientists were compelled to reveal their funding, which is otherwise irrelevant as a revelation if no corruption is seen as the result of it? Was he also the ‘only reporter in the briefing room’ to witness Ben Santer being visibly shaken by questioning from industry-associated people, and what series of efforts landed him at that obscure U.S. House briefing? How does it work out that he would be so easily able to conduct a phone interview with one of those industry-associated people afterward, while also being available for a personal meeting with an anthropology student who would have likely never known a thing about him a month before his big December 1995 Harper’s “The Heat is On” article was published? And what series of situations would have led Naomi Oreskes to find out about a cultural anthropologist’s otherwise highly obscure 1998 PhD dissertation or her equally obscure 1999 24 page book chapter based largely on that dissertation?
————————————————————————
But, wait, there’s more – “The Big Ben Santer Problem, Pt 3: When is an Attack Not Actually an Attack?”