And there’s really no necessity to tell anybody exactly what that accusation means. Al Gore and the top-most promulgators of the ‘climate scientist liars-for-hire’ accusation know what it means …. they simply haven’t proven that any such corruption actually exists anywhere.

It’s disturbing enough that there are active efforts to prevent the public from comprehending how there might be legitimate science-based doubt about the certainty of catastrophic man-caused global warming, but the reason why this otherwise dead issue is critically important is because of the way the shunning of skeptics is justified. No need to prove they are guilty of industry corruption. They just have to look guilty.

No joke. But first, let’s review how the accusation is trotted out.

Just weeks ago, in response to the news that President Trump’s National Security Council Deputy Assistant for Emerging Technologies, Dr Will Happer, is moving ahead on a climate science debate panel, we have this somewhat benign accusation within the New York Times “Trump Administration Hardens Its Attack on Climate Science” article:

… Happer .. [is a beneficiary] of Robert and Rebekah Mercer, the far-right billionaire and his daughter who have funded efforts to debunk climate science.

Enviro-activists ought to be livid that the NYT didn’t cite Greenpeace to say Dr Happer is funded by the fossil fuel industry. Why didn’t the newspaper do that? Well … Greenpeace’s evidence was fake, a sting effort. Back in 2015 when I detailed Greenpeace’s Senate hearing room ambush of Dr Happer, I wondered why they made the blunder of not additionally fabricating instructions for Dr Happer to knowingly make false science assertions. Today I realize why they left that out. They don’t actually believe it’s necessary to have evidence of corruption. I’ll illustrate that inexplicable mentality at the end of this blog post.

To the NYT‘s credit, their article did contain a less benign accusation aimed at Myron Ebell’s organization:

Myron Ebell, who heads the energy program at the Competitive Enterprise Institute, an industry-funded research organization, and who led the administration’s transition* at the E.P.A. ….
*(I covered that situation in my “Gelbspan & Trump’s EPA Transition Team leader” post)

Many regurgitate that same generic accusation. From the mis-named “Skeptical Science” blog’s 12/9/17 review of a science paper criticizing doubt about the plight of polar bear populations, we have the following under the “How should we deal with the denial?” heading:

Never mind in this example that the source for the claim are authors of the “Merchants of Doubt” book who never provide evidence proving the corrupt funding came with instructions to lie. A mere look at their book title ought to be good enough.

This widespread mentality — ‘the evidence is out there somewhere’ — regularly pops up in letters to the editor about the issue, such as this June 7, 2019 MD Islander letter from a Pennsylvania resident (or this 14 days earlier variant from a Colorado … oh, wait …), where it’s implied these bombshell accusation revelations are somewhere within the vast labyrinths of online articles and entire websites:

… misinformation produced as part of a sophisticated, decades-long, clandestine climate denial campaign funded to the tune of $2 billion by this country’s biggest fossil fuel corporations. (see

Every professional climate denier is paid under the table by the fossil fuel industry. See

Right. What happens when a person undertakes a deep examination of those sources?

Alongside keynote speaker Senator Sheldon Whitehouse … Davies participated in a discussion on a recently published paper by Justin Farrell … The panelists examined the corporate genesis of the climate denial movement … Using documents and analysis found on Climate Files, Davies [showed] … that the fossil fuel industry engaged and funded a climate change countermovement …

Don’t get me started on how Davies, his CIC, his ClimateFiles, and Farrell and Whitehouse are enslaved to a single source as evidence for their accusation.

Give folks elsewhere around the internet at least some credit for their effort to directly connect the accusation with plausible-sounding evidence for it. At the current “Campaign against Climate Change, Brown University Report and Panel” website’s “Funders of Denial” page, we see this:

Problem with that evidence is that the plan was * and never implemented. It’s worthless evidence to prove this conspiracy.  [*Author’s 5/13/21 note: this is corrected/clarified here]

Then there was Al Gore, off camera at the 2008 Davos conference:

Gore didn’t even get it right about where that phrase came from, but nevertheless, it is also worthless evidence to prove this conspiracy, because it, too, was unsolicited and never implemented.

Lame occasional efforts aside to provide plausible-sounding direct evidence, the key ingredient is trotted out  every.  single.  time:

What does that actually mean? Since the notion about them ‘repositioning global warming back to theory in such a way that it causes the general public to recognize uncertainty in the whole deal’ is out the window, we have a fatal problem here: “funded” by whatever is not is not a good enough reason to dismiss anybody’s viewpoints.

Except the far-left believes it to be entirely good enough. One of my online comment stalkers succinctly illustrated this exact line of reasoning recently, aimed at two particular skeptic speakers, but essentially directed at all prominent-name skeptics: 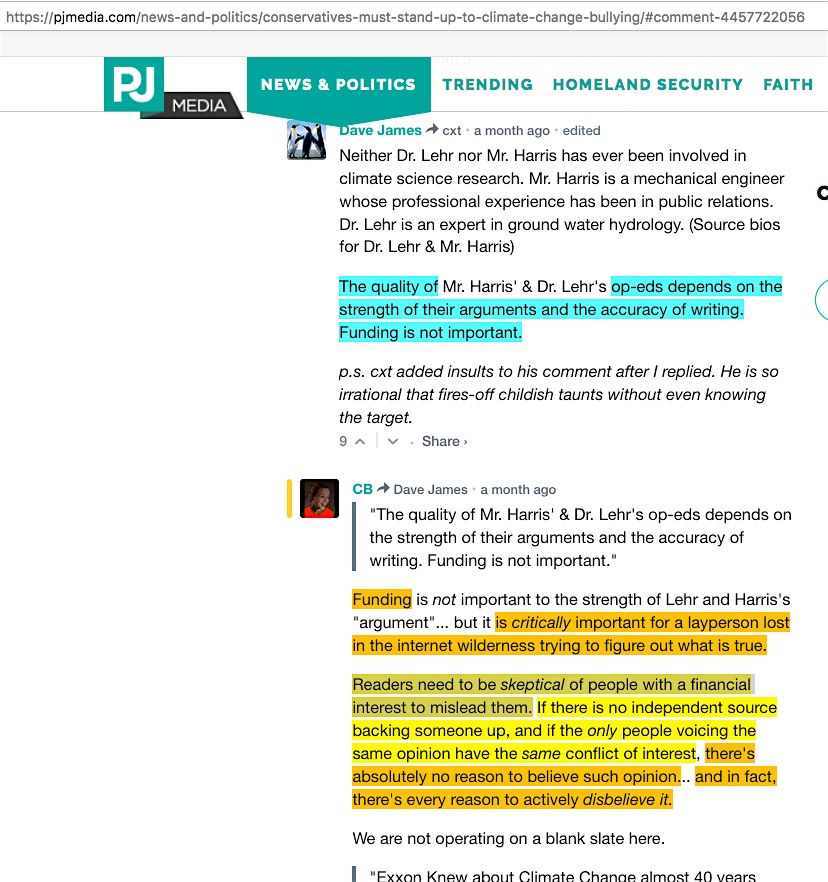 Funding … is critically important for a layperson lost in the internet wilderness trying to figure out what is true.

Readers need to be skeptical of people with a financial interest to mislead them. If there is no independent source backing someone up, and if the only people voicing the same opinion have the same conflict of interest, there’s absolutely no reason to believe such opinion… and in fact, there’s every reason to actively disbelieve it.

Forget whatever the complexity is that’s being addressed by the speaker, in other words. If such speakers have any appearance of association with organizations that you’d guess might have a bad influence over them, you have no reason to believe anything these speakers say, and basically have an obligation to actively ignore them.

The spectacular irony here is how the one bit about ‘people with a financial interest‘ more accurately applies to far-left efforts to counter what skeptic climate scientists have to say. Environmentalist groups are by default non-profit organizations, they thrive or die from the levels of donations they receive. John Passacantando’s dinky little Ozone Action group found itself in peril of losing its funding for mitigating ozone depletion when an atmospheric physicist, Dr S Fred Singer, used his expertise to undermine all they stood for. After all, why donate to stop ozone depletion if there’s no actual problem associated with it? As Dr Singer himself pointed out back in 2000, Greenpeace USA was in the process of extricating themselves from a massive dry-up of donations. By default, they’d have a financial interest in making sure nobody undermined their new-found zeal to save the planet from global warming. People like Dr Singer needed to be stopped, lest everyone see no need to finance efforts to mitigate man-caused global warming.

But the other spectacular irony here is the massive psychological projection about the problem of ‘no independent source‘ / ‘the only people voicing the same opinion have the same conflict of interest.’ As I’ve pointed out time and time again at this blog, that’s precisely the problem fatally plaguing the accusation about industry-corrupted skeptic climate scientists.

What this all leads to is the antithesis of a free society: you are being told someone does not need to be proven to be guilty of a particular act, you can base your viewpoints about them just because they look guilty.