… which is a hint for energy company defendant lawyers and objective news reporters to deeply consider. If “li’l ol’ private citizen me” can apparently prompt such a response, imagine what official investigators with far more influence or subpoena power can accomplish. END_OF_DOCUMENT_TOKEN_TO_BE_REPLACED

Another way of putting today’s blog post topic is to say that if global warming believers demonstrate how they only have one or two sets of leaked industry memos from the 1990s to support their assertions about the ‘inherent racism of the fossil fuel industry‘ or that ‘the industry’s publicity is a complete lie’ …. well, then that’s all they got. One of these days their enslavement to those memo sets — the “reposition global warming” set and the “victory will be achieved” set — will experience a ‘jumped the shark’ event that will be reported by more prominent people than me, but in the meantime, this blog will have to suffice for reporting on such things.

No joke, two separate spin efforts just within the last 35 days: the underlying racism of the fossil fuel industry, and the effort to smear that industry as complete liars. END_OF_DOCUMENT_TOKEN_TO_BE_REPLACED

The situation concerning the cavalry-style arrival of the Yale Program on Climate Change Communication (YPCCC) to save us all from global warming disinformation on Facebook begs for a comparison to a comical scene from a famous old movie, where the man held at gunpoint dejectedly notes the unexpected arrival of the totally corrupt police commissioner. 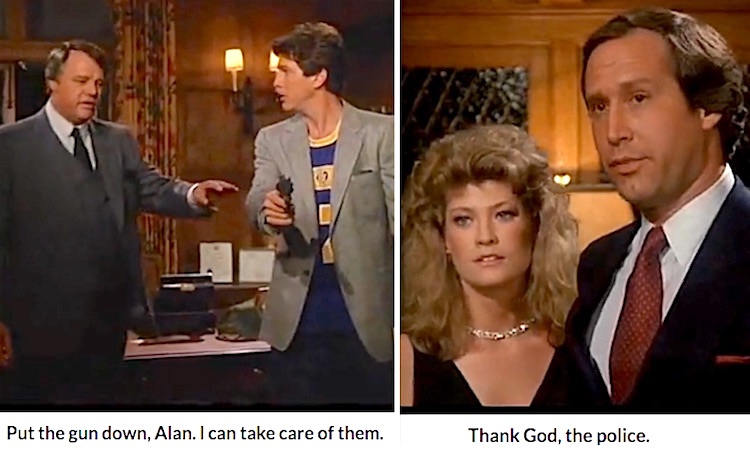 The highlights from the February 24, 2021 announcement are as follows ……………….. END_OF_DOCUMENT_TOKEN_TO_BE_REPLACED

END_OF_DOCUMENT_TOKEN_TO_BE_REPLACED

It’s a propagandist’s dream to see reporters repeat blatantly false stories about supposedly devastating leaked industry documents revealing hidden corruption, even when the reporters get basic details of the docs wrong — so long as neither the reporters nor anybody else questions those basic details. It’s a propagandist’s nightmare when too many storytellers describing the revelations can’t keep the overall story straight, whereupon the revelations cease to resemble a bombshell story and instead increasingly look like an orchestrated propaganda disinformation effort. END_OF_DOCUMENT_TOKEN_TO_BE_REPLACED

I figured that would be the end of it regarding Nathanial Rich. I should know better about such things by now; Oreskes is never the end of the line in these kinds of situations. END_OF_DOCUMENT_TOKEN_TO_BE_REPLACED

And there’s really no necessity to tell anybody exactly what that accusation means. Al Gore and the top-most promulgators of the ‘climate scientist liars-for-hire’ accusation know what it means …. they simply haven’t proven that any such corruption actually exists anywhere. END_OF_DOCUMENT_TOKEN_TO_BE_REPLACED

A strange pair of same-day appearances barely over a month ago of that supposedly ‘leaked industry strategy memo phrase’ are an indicator of how people who can’t stop repeating it seem blissfully ignorant regarding the way its less-than-three-degree separation from Ross Gelbspan — and all the related fatal problems surrounding that — could potentially torpedo the legacies of the prominent people who’ve long promulgated it as evidence of the fossil fuel industry conspiring with skeptic climate scientists to undercut the alleged ‘certainty’ of man-caused global warming. Watch this. END_OF_DOCUMENT_TOKEN_TO_BE_REPLACED

The prominent people promulgating the notion of catastrophic man-caused global warming seem to be oblivious to how some of their statements are totally unfettered psychological projection of what their side is actually enslaved to, when it comes to protecting their position with multi-pronged attacks against their ‘fossil fuel industry-paid corrupt critics.’ END_OF_DOCUMENT_TOKEN_TO_BE_REPLACED 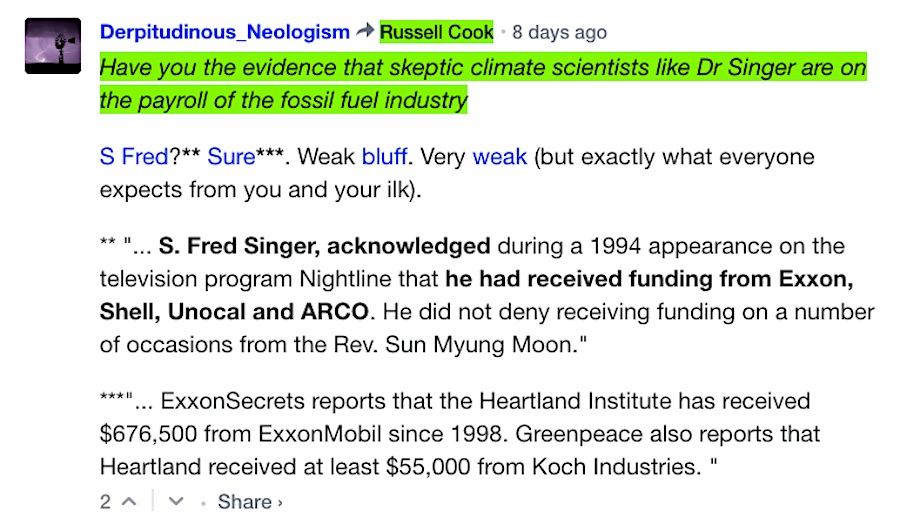 ….. and it always turns out embarrassingly bad for people attempting to answer the question. So, regarding this particular hapless anonymous commenter, let’s peel back the layers and see where the wipeouts occur. But after that exercise, consider this: what happens when this same basic inquiry is put to luminaries such as former Vice President Al Gore, or to “Merchants of Doubt” documentary movie star/book author Naomi Oreskes, or to the plaintiffs in the assortment of global warming lawsuits, all of whom claim the fossil fuel industry hid the harm of its product causing global warming by hiring shill scientists to spread misinformation? END_OF_DOCUMENT_TOKEN_TO_BE_REPLACED