In the middle of the summer of 2016, Rhode Island Senator Sheldon Whitehouse participated with his comrades in a U.S. Senate floor speech stunt decrying the hazards of man-caused global warming. His speech contained a roll call of people who supposedly exposed the complicity of skeptic climate scientists in a fossil fuel industry-funded disinformation campaign. I’ll note why this older event is still relevant today at the end of this post, and for the newer readers arriving here, please do click on my links, as many are quick-glance screencaptures of text details I refer to, or are fuller context posts about my references.

This “19 Senators” floor speech event was covered barely one day later in huge detail by Desmogblog’s Brendan DeMelle (yes, that Desmogblog, the site inspired by, motivated by, and built on the works of Ross Gelbspan), where DeMelle particularly highlighted Senator Whitehouse’s speech with a photo (while additionally being unable to resist Senator Udall’s utterances about the “Information Council on the Environment,” a.k.a. the worthless evidence that is the core evidence for the notion that skeptic climate scientists are corporate-paid liars). Wait — not just one photo, DeMelle ended his article with another of Senator Whitehouse, concerning a prior Senate floor speech which I addressed in Part 1.

Predictably, DeMelle also told how Desmog, Exxon Secrets and Climate Investigations Center deserve major credit for exposing this corrupt disinformation campaign. Yes, that Kert Davies/ExxonSecrets, a site created by what I term “Greenpeace USA née Ozone Action,” and that Kert Davies-operated CIC site. That Kert Davies, who traces back to Ozone Action, a.k.a. here at GelbspanFiles as the epicenter of the smear of skeptic climate scientists.

See the pattern? Skip all the subsequent middlemen for the ‘liars for hire’ accusation, just cite Gelbspan and the old crew at Ozone Action.

Now, lets have a look at Senator Whitehouse’s 2016 speech. It’s not overly long, just over 20 minutes here, and nicely preserved in full context at the Senator’s own website pages. He claims:

… there is a growing body of scholarship that helps us, that is examining this apparatus, how it is funded, how it communicates, and how it propagates the denial message. It includes work by Harvard University’s Naomi Oreskes, Michigan State’s Aaron McCright, Oklahoma State’s Riley Dunlap, Yale’s Justin Farrell, and Drexel University’s Robert Brulle, but it is not just them. There are a lot of academic folk working on this to the point where there are now more than 100 peer-reviewed scientific articles examining this climate denial apparatus itself. These scientists are doing serious and groundbreaking work.

No, they actually are not. They aren’t even scientists, they’re mostly sociologists, and in the case of Naomi Oreskes, she is no more than a science historian … who can’t even keep her own history straight. When it comes to Brulle and Farrell in the Senator’s list above, I already covered their ties and Oreskes’ to Ross Gelbspan’s ‘crooked skeptic climate scientists’ accusation in my dissection of Oreskes’ recent Friend of the Court brief for the California global warming lawsuits. I covered Dunlap’s in my “The Citation Cascade Fatal Problem” post, and McCright briefly in my “Skeptic-Trashing Environmental Sociologists” post. McCright is routinely seen as a co-author in such articles with Riley Dunlap.

But let’s go a bit deeper on Aaron McCright’s connections for laugh’s sake. Back when Robert Brulle shared his Facebook Friends list with the public, McCright was in it, along with alleged Ozone Action co-creator Kalee Kreider and affirmed co-founder John Passacantando (that Passacantando). Brulle’s FB Friends list has vanished, though. This seems to happen when I bring up who’s Friends with whom. Kalee? Same situation. But hidden FB Friends lists are defeated somewhat when folks on those lists still allow the public to see their own list.

Meanwhile, all by himself in his own sole-authorship 2009 “The Social Bases of Climate Change Knowledge, Concern, and Policy Support in the U.S. General Public” paper, McCright could go no farther than his third footnote without bringing up Ross Gelbspan’s name, and felt compelled to cite a 2000 paper he co-authored with Dunlap immediately after, and his own 2007 book chapter after that. Whose name could McCright not avoid noting no later than the second paragraph of his 2007 book chapter contribution? Ross Gelbspan. Who did McCright & Dunlap cite in their 2000 paper for their notion about “Existing journalistic analyses” which exposed “sympathetic ‘skeptic’ scientists” and their “industry allies“? Ross Gelbspan and Ozone Action (while further adding there there was then a need for “for in-depth sociological analyses of these phenomena”). That Gelbspan / Ozone Action duo.

There’s one more irony to this circular / single citation farce. I highlighted Senator Whitehouse’ awkward-sounding bit about “a growing body of scholarship” for a specific reason. It’s not the first time that phrase appeared. McCright & Dunlap said that back in 2011 (in a paper which also cited Gelbspan about ‘crooked skeptics.’ 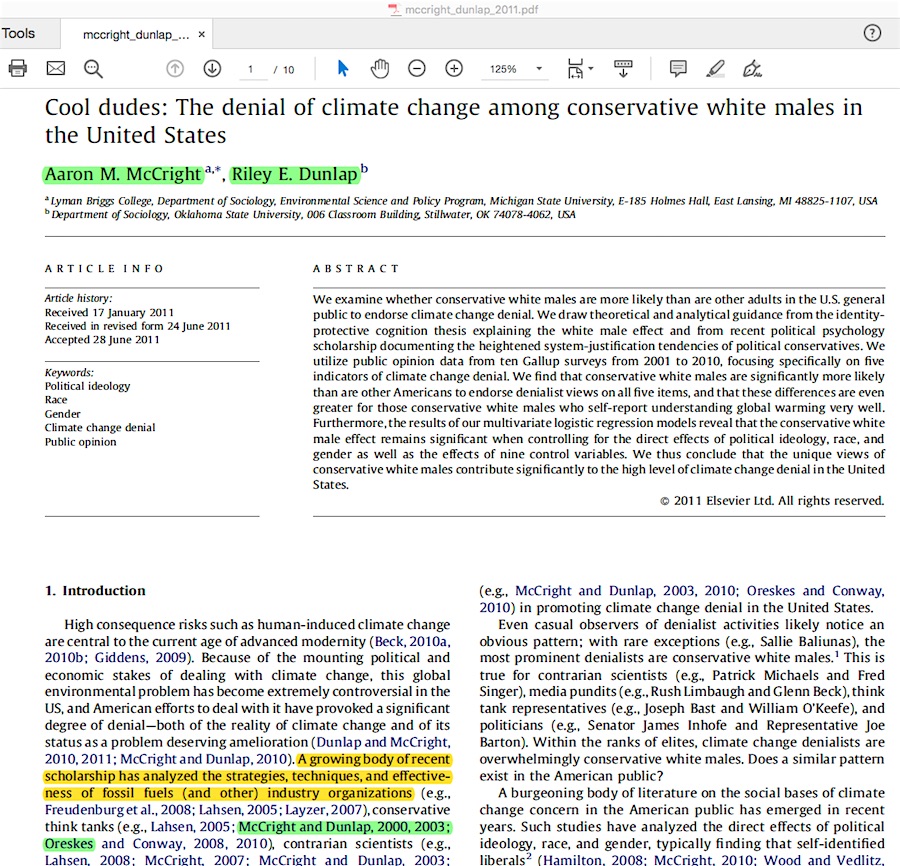 A growing body of recent scholarship has analyzed the strategies, techniques, and effectiveness of fossil fuels (and other) industry organizations.

Riley Dunlap brought that ‘body of scholarship’ up again in his 2013 paper’s conclusion for emphasis, while previously noting that situation in reference to his fellow sociologist William Freudenburg (that Freudenburg), and others which are best illustrated in a screencapture tour de force: that Naomi Oreskes, that Erik Conway, James Powell, Sharon Beder, Myanna Lahsen, Sharon Begley, Chris Mooney, Fred Pearce, Eric Pooley, Spencer Weart, Rick Piltz, Eli “plunges off the single source cliff” Kintisch, Michael Mann, and Stephen Schneider. All of that collective ‘body of scholarship/social science’ in the midst of crediting Ross Gelbspan as an ‘investigative journalist’ who first exposed the ‘corruption of skeptic climate scientists’ (there’s a problem with that ‘journalist label,’ but it’s a whole other story).

It doesn’t end there. David Levy, a UMass professor who is not especially far outside the realm of ‘social science,’ had that “growing body of scholarship” phrase applied a little more vaguely toward the topic of Environmental Management in his 1997 “Environmental Management as Political Sustainability” paper. However, he was much less subtle about citing both Ross Gelbspan and Ozone Action, while implying that the infamous “reposition global warming” leaked memo phrase was used as a negative corporate form of environmental management. It seems what Aaron McCright was wishing for in 2000 was already underway just two months after Gelbspan published his April 1997 “The Heat is On” book which contained that same ‘implication’ evidence.

No matter where you go in the ‘crooked skeptic climate scientists’ accusation, there you are. Same lineage back to the same single source ‘evidence.’ Which brings us up to the current year, Senator Sheldon Whitehouse’s own January 29, 2019, Friend of the Court filing for the California global warming lawsuits.

In this instance, the Senator was aiming his diatribe against the U.S. Chamber of Commerce’s own opposing amicus curiae filing, seemingly hurling his standard ‘corrupt skeptics’ accusation devoid of any supporting evidence citations. Notice the swipe about that within his footnote #1 ….

… the Chamber in this respect is sustained and controlled by fossil fuel industry funding.

…. followed by this additional unsupported swipe right after that about them being an indicator of …

… a decades-long campaign of disinformation, obstruction, and political intimidation …

Campaign financed and orchestrated / carried out by whom?

He repeated the accusation again at the end of his subsequent Argument section for emphasis, but this time with a supporting footnote. Who’s the source in that footnote? Robert Brulle? Not so much, the reference to him there is little more than his 2017 paper that’s no more than a “skeptics are funded” pointless exercise. Funded to perform what specific task, at the risk of the funding being taken away if they do not perform?

Senator Whitehouse’s source for his accusation is …

A.k.a, the story of organized denial has been well told and documented. No, it has NOT. But why didn’t Senator Whitehouse do his standard roll call of a single source wipeout in his own court filing here? Because for all practical purposes, that was taken care of in the same-day January 29, 2019 Friend of the Court filing for those same California global warming lawsuits by three of the people on his roll call list. The same three and others in ‘peer-reviewed academic research’ which I dissected here as being unable to not only unable to provide any viable evidence of a pay-for-performance arrangement between fossil fuel executives and skeptic climate scientists, but also having three degrees or less separation from Ross Gelbspan.

Coincidence? As I said at the beginning of my Part 1 post about Senator Whitehouse, a hallmark of the far-left side political spectrum, including the far-left enviro-activists, is their psychological projection. To answer the question about coincidence, serious top-level investigators should try to see if enviro activists cannot extricate themselves from the appearance that a decades-long campaign of disinformation, obstruction, and political intimidation involving politicians with apparent ties to the effort is not what the enviro-activists have been doing this entire time.

And, piling on to what I suggested at the end of Part 1, serious top-level investigators might have some fun with Senator Whitehouse by asking him if any of the names in his ‘growing body of scholarship’ are not incestuously tied to each other, or if any single one of them has independently corroborated evidence to prove the ‘industry-paid skeptic climate scientists’ accusation.
————————————————————————
Part 1: The Mythological Hydra: Many Heads, Same Beast.