Here’s a simple exercise – do a basic internet search (which excludes my own writings) of key words from a thoroughly documented leaked tobacco industry memo combined with those from an alleged leaked fossil fuel industry memo, and see how many anti-tobacco activists crow about the way cigarette company activities compares to what’s implied in the other memo. What’s hard to miss in the search results is the appearance of the use of the tobacco memo as a talking point to lend unquestioned credibility to the alleged fossil fuel memo. If we had a responsible mainstream media, objective investigative reporters would delve into that problem, ask simple questions, and dig deeper if they spotted details leading to more problems.

To show how this might be undertaken, let’s start with Al Gore. In his 2006 movie, he directly equated the supposedly leaked “reposition global warming” strategy memo to the leaked tobacco industry memo “Doubt is our Product,” noting with regard to the latter that it was “one of their memos leaked 4 years ago.”

Or else he said “40 years ago,” it’s difficult to tell from the audio on the DVD of the movie. A quick look into Gore’s movie companion book confirms the “Doubt is our product” as a 1960s publication, and it takes only a little further search effort to narrow the date down to 1969, thirty seven years before Gore’s 2006 movie. Above the bit about the memo’s time period, Gore’s book says it was “recently uncovered during one of the lawsuits against the tobacco companies.”

When was that? For curiosity’s sake, did Gore still mean the memo only became public in 2002? A quick internet search reveals a 2016 BBC analysis article relating to the tobacco memo stating it was a secret memo revealed to the public in 1979. Predictably, the article ties the tobacco industry to the global warming issue, and then ironically speaks of ignorance being spread by the internet.

Why is that ironic? Quite simply, no easily-found information corroborates the writer’s assertion about the “Doubt is our product” memo being publicly revealed in 1979. In extensive internet searching, I can trace it no farther back in a public revelation than 1993 (more that date below). One of the search results I found is a February 2016 climate issue speakers summary, which debunks the 1979 leak date this way:

In the 1990s, tobacco company documents leaked to the news media proved for the first time that, not only did cigarette makers know their products are addictive and cause cancer, but they had been waging a concerted campaign to cover up the truth and distract the public from the dangers of smoking.

Sound familiar? Recently, the Los Angeles Times and Inside Climate News reported that scientists at Exxon Mobil had studied global warming as far back as the 1970s. At the same time …, the company waged a public relations campaign denying that burning fossil fuels was heating the planet.  ….

Their methods seem to have been strikingly similar, as Stanton Glantz of UCSF’s Center for Tobacco Control Research and Education relates. … In the words of the tobacco companies, Glantz says, “Doubt is our product.” …

Glantz sees tremendous parallels between the two stories, “in part because a lot of the same people and companies that the tobacco companies hired to create doubt and confusion … subsequently went to work for the petrochemical companies to do the same thing.”

Stanton Glantz, of the more popularly known “Legacy Tobacco Documents Library.” If anyone could put a date on when the “Doubt is our product” memo, it would be Glantz. But the appearance of his name is not trouble-free (hold on to that thought for a moment as well).

The Legacy Tobacco Documents Library’s About page offers the following:

The UCSF Library launched The Legacy Tobacco Documents Library in 2002 but the genesis of the project began 8 years earlier when a few thousand pages of highly confidential, internal documents from the Brown & Williamson Tobacco Corporation were copied and leaked by an anonymous whistleblower to various academics, media outlets and Congress. One of these document sets was sent to UCSF professor Dr. Stanton Glantz in May, 1994.

Stanton Glantz’s own words about the date — mid-1994 — are oddly more vague within the June 1, 1996 book he edited, which had the “Doubt is our product” memo headlining Chapter 5 (Amazon’s description puts the documents’ arrival at May 1994). A 2008 book puts Glantz’s receipt of the documents exactly on May 24, 1994.

There’s no detail on any major news outlet revealing this to the world in Stanton’s writings, though. Perhaps the detail in Gore’s movie book about “recently uncovered during one of the lawsuits” can clear it up. Where does a search of that lead?

An investigative journalist website with a timeline dedicated to developments in tobacco litigation cases says specifically regarding the “Doubt is our product” memo, “The confidential minutes of the presentation were later unearthed during legal discovery, and the document is believed by some to be a “smoking gun.” The endnote is for David Michaels’ “Doubt is Their Product” book, in which he not only characterizes the memo that way, but also says it came up during legal action discovery process. But he puts no date on the specific event.

Contrast that with what Naomi Oreskes at her 2012 La Jolla California workshop on how to use legal action against fossil fuel companies in global warming lawsuits, under a section headlined by Stanton Glantz (click image to enlarge). 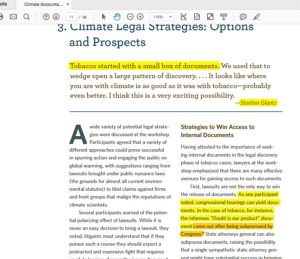 As one participant noted, congressional hearings can yield documents. In the case of tobacco, for instance, the infamous “Doubt is our product” document came out after being subpoenaed by Congress.

Proctor’s endnote for this only further muddies the water – the best he can come up with for early public revelations of the memo is an obscure 1981 newspaper article … and Stanton Glantz’ 1996 book. Want to see something really weird? Why didn’t Proctor refer to his own mention of the “Doubt is our product” memo which predates Glantz’s receipt of the tobacco document pile by one year? (full text here) Want to see an acutely ironic assertion from Proctor’s 1993 piece – in light of the polar-opposite subsequent direction of the MacNeil/Lehrer NewsHour – about unwarranted media “fairness” that looks like nothing less than an overall template which could be applied straight to the global warming issue? 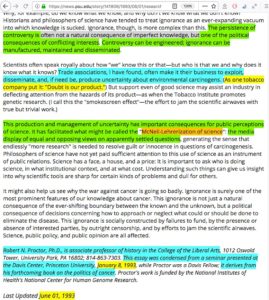 The persistence of controversy is often … one of the political consequences of conflicting interests. Controversy can be engineered; ignorance can be manufactured, maintained and disseminated. …

… this production and management of uncertainty has important consequences for public perceptions of science. It has facilitated what might be called the “McNeil-Lehrerization of science“: the media display of equal and opposing views on apparently settled questions.

Simplify this to three talking points: “settled science / shill experts are paid industry money to lie about it being not settled / we may ignore those shills because of the first two points” and apply all three to the global warming issue if it begins to falter under highly plausible science points from skeptic climate scientists, which non-scientists such as Al Gore have no hopes of countering.

Isn’t it interesting that Proctor is one of the participants seen at Naomi Oreskes’ 2012 workshop, along with Stanton Glantz and non-climate scientists such as James Hoggan, John Mashey and Matt Pawa? Each, dependent on the comparison of the “Doubt is our product” memo to some kind of, any kind of leaked memos from the fossil fuel industry to prove the latter ‘tobacco industry-like corruption’ exists.

Isn’t it interesting that prior to the release of Al Gore’s 2006 movie, the public was treated to another less famous politician making the tobacco industry comparison within the same article where the “reposition global warming” memo is seen…. 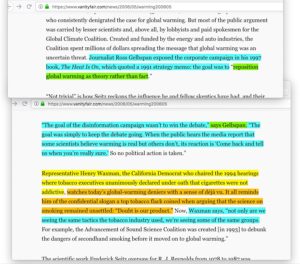 Journalist Ross Gelbspan exposed the corporate campaign in his 1997 book, The Heat Is On, which quoted a 1991 strategy memo: the goal was to “reposition global warming as theory rather than fact.” …

“The goal of the disinformation campaign wasn’t to win the debate,” says Gelbspan. “The goal was simply to keep the debate going. When the public hears the media report that some scientists believe warming is real but others don’t, its reaction is ‘Come back and tell us when you’re really sure.’ …”

Representative Henry Waxman, the California Democrat who chaired the 1994 hearings where tobacco executives unanimously declared under oath that cigarettes were not addictive, watches today’s global-warming deniers with a sense of déjà vu. It all reminds him of the confidential slogan a top tobacco flack coined when arguing that the science on smoking remained unsettled: “Doubt is our product.” Now, Waxman says, “not only are we seeing the same tactics the tobacco industry used, we’re seeing some of the same groups.”

No, we aren’t. But doesn’t that bit sound familiar? Stanton Glantz got the talking point from Congressman Henry Waxman via the May 2006 Vanity Fair article?

Despite endless comparisons to expert tobacco industry shills, we have yet to see an iota of proof that the fossil fuel industry knew their product was the main driver of global warming and paid skeptics to lie that it wasn’t.

Let’s be clear on one thing, and give credit where credit is due: Cigarette smoking leads to cancer, it’s harmfully addictive, there’s plenty of harm in the smoke first-hand and second-hand, and the product itself is one nobody actually needs. Coffin nails – WE ALL GET THAT. And Stanton Glantz was handed ammo on a silver platter, which pretty much anybody could use to point out the guilt of the tobacco companies. A person would have to be either an idiot not to see what the problem was, or is paid to deny that reality.

On and on and on. It’s ultimately a fatal comparison. Look deep enough into the leaked tobacco industry memos, and the only troubling problem is that the leaker might have broken some kind of law firm privacy consideration.

Look deep enough into the collective situation surrounding the “reposition global warming” memo set which includes the targeting section about “older, less-educated men” / “young, low-income women,” and there’s enough problems to sink an ocean liner. Not the least of which is the critically necessary continual apples & oranges diversion tactic comparison of it to the “Doubt is our product” memo, with the fervent hope that since nobody questions the guilt of the tobacco companies, nobody needs to question the veracity of this ‘sinister memo set.’