This latest global warming lawsuit has two major problems. First, it’s essentially pure “boilerplate copy ’n paste” from six other current California global warming lawsuits being run by the same Sher Edling law firm. I already covered that problem – their enslavement to Ross Gelbspan’s worthless ‘leaked memos’ accusation about ‘crooked skeptic climate scientists’ – in my dissections of the Santa Cruz City/County / City of Richmond v. Chevron trio, and the San Mateo / Marin Counties / City of Imperial Beach v. Chevron trio. But I found another problem I’d overlooked in those filings. Call it “The Fingerprints of Naomi Oreskes,” a situation which only further opens a window into just how disingenuous the overall “evidence” is that’s used to indict skeptic climate scientists of industry-paid corruption.

A quick review of the ‘boilerplate’ problem: All seven of these Sher Edling lawsuits state no later than in the opening sentences of their introductions – including this latest Rhode Island filing – that fossil fuel companies …

… have known for decades that those impacts could be catastrophic and that only a narrow window existed to take action before the consequences would be irreversible. They have nevertheless engaged in a coordinated, multi-front effort to conceal and deny their own knowledge of those threats, discredit the growing body of publicly available scientific evidence, and persistently create doubt in the minds of customers, consumers, regulators, the media, journalists, teachers, and the public about the reality and consequences of the impacts of their fossil fuel pollution.

Engaged in a coordinated, multi-front effort to create doubt. As everyone knows, courts don’t accept idle accusations, the accusations must have supporting evidence. What is the most damaging evidence all seven Sher Edling lawsuits have for this corruption accusation – including this latest Rhode Island filing? ‘Orders from headquarters’ to skeptic climate scientists and the alleged front-group people they work with to hoodwink uneducated poor people into believing global warming is still a theory and not a fact:

*(The Rhode Island filing, like the County / City of Santa Cruz / City of Richmond trio, leaves out that latter memo phrase about women)

Smoking gun right there, right? No, it has a fatal problem: The Western Fuels Association ICE campaign neither operated under that strategy goal nor did it target such people. The ‘orders from headquarters’ memos supposedly leaked out of the campaign were never even seen by the person heading the campaign. Making matters worse, the ICE campaign was not a nationwide denial campaign, it was a tiny pilot project effort restricted to actual public relations efforts in only three small cities over the span of just a few weeks. This so-called ‘evidence’ within major lawsuits is disingenuous at best. The question to ask here: what did the preparers of these lawsuits know about the sheer worthlessness of the accusation surrounding these ‘leaked memos’ and when did they know it?

Then, there is this other major problem, which I previously overlooked:

It’s seen in all seven lawsuits’ “Factual backgrounds” sections, about how not only fossil fuel companies (allegedly) knew about the certainty of the harm of man-caused global warming for decades, but no less than the long-ago President of the United States, Lyndon Johnson, supposedly knew it as well: 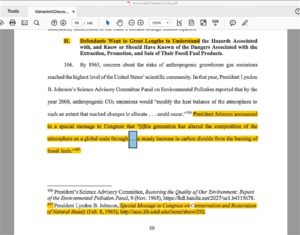 President Johnson announced in a special message to Congress that “[t]his generation has altered the composition of the atmosphere on a global scale through . . .  a steady increase in carbon dioxide from the burning of fossil fuels.

There’s three periods in the quote of President Johnson’s assertion. I highlight it with a dark colored box in the screencapture of the Rhode Island lawsuit version and in red in my verbatim text from the lawsuit transcript. That’s an ellipsis, understood by well-educated readers as indicating missing words that aren’t really necessary; the reader gets the point even in their absence. Often, entire paragraphs are missing, and that’s readily obvious when readers glance into the full context.

But what’s missing from the full context of President Johnson’s speech? Three words: “radioactive materials and.” Read through the full speech — either the cumbersome non word-searchable photographed version via the link the lawsuits provide**, or via a word-searchable archive version I found — and you see it isn’t about global warming in the least, it’s about restoring what man’s technology has wrecked; highway beautification; clean rivers; the harm of air and water pollution; and the overall need to remedy the problems. What’s plainly obvious is how the words “radioactive materials” completely undercut the idea that the speech was a global warming warning clarion call.

**[12/16/22 Author’s addition: Having found the word-searchable speech version at the time I wrote this dissection, I did not try to look deeply through the scanned pages of the speech at the lawsuit’s link. However, in writing my 12/15/22 blog post I discovered the file for the lawsuit’s link is missing four pages, including the specific one with the “through radioactive materials” words. I found an even better searchable text page, directly from the LBJ Library site, and it is definitely not missing those inconvenient words.]

So, are the people who prepared and wrote the seven Sher Edling lawsuits guilty of trying to deliberately misconstrue what President Johnson said? I wouldn’t put a big wager on it.

Because that ‘ellipsis’ stunt with President Johnson’s speech was seen at the Washington Post over a decade earlier … in Naomi Oreskes’ February 1, 2007 “The Long Consensus On Climate Change” article. (click image to enlarge) 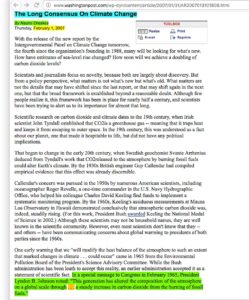 Astute searchers need only undertake a targeted internet search to see just how often President Johnson’s sentence, with the ellipsis, is seen connected to Naomi Oreskes. By the end of 2007, she was already featuring it in a prominent slide presentation. 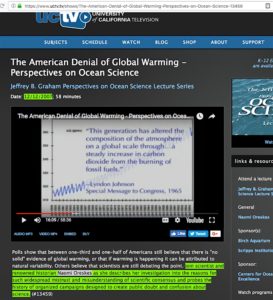 Get the picture now?

The accusation about a sinister corporate conspiracy to pay skeptic climate scientists to lie and spread misinformation is a hundred miles wide, more than 27 years old, and paper-thin, with its enslavement to just one solitary ‘plausible’ source of evidence. If there is one thing these seven Sher Edling global warming lawsuits reinforce, it’s the appearance that just a small clique of interconnected individuals are pushing the ‘crooked skeptics’ accusation with epic levels of disingenuous deception.