The “tobacco angle” being the notion that the fossil fuel industry allegedly fully knows their products cause catastrophic global warming harm in a manner no different that the tobacco industry knowing full well about the cancer-causing harm of cigarette smoking, and how both industries are accused of creating disinformation campaigns to deceive the public about the harm of their products. Within the global warming disinformation accusation is the claim that some of the same people supposedly spewing climate disinformation also did so for the tobacco industry. “Merchants of Doubt” book author / documentary movie star Naomi Oreskes gained heroic – no, make that “supernova” / “living legend” – status from revealing this claim to the world, partly praised on that latter accolade by no less than the person she credits with being the first to steer her toward that ‘tobacco industry connection,’ Lawrence Livermore atmospheric scientist Ben Santer.

1) being personally attacked after she wrote a paper about the scientific consensus for man-caused global warming; 2) advised to talk to Ben Santer, a victim of a similar attack; and 3) how Santer “started telling this whole story about how he had been attacked by Fred Seitz and how it was just like the tobacco industry…”

…. at a superficial level, and sounds quite plausible. Go deeper on that last bit, and various problems start to arise. END_OF_DOCUMENT_TOKEN_TO_BE_REPLACED

Loyal readers here know I have said on more than one occasion that Naomi Oreskes has an inability to keep her mouth shut regarding ancillary details (plural) surrounding the accusation about skeptic climate scientists being ‘liars for hire’ on the payroll of the fossil fuel industry. 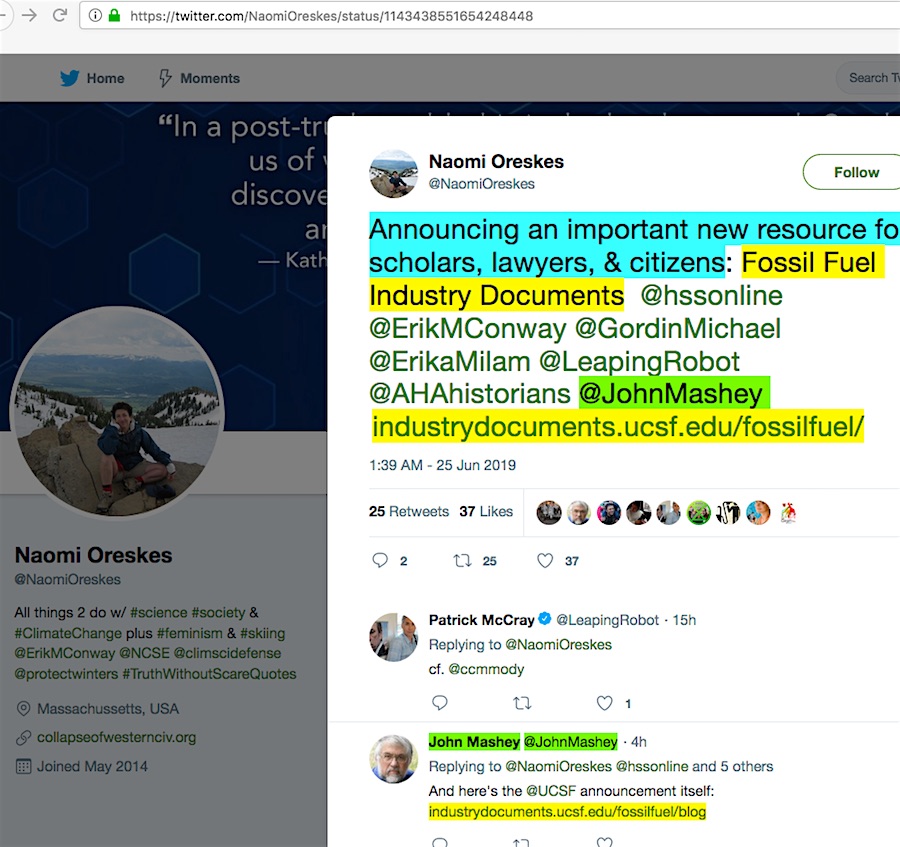 END_OF_DOCUMENT_TOKEN_TO_BE_REPLACED

Here’s a simple exercise – do a basic internet search (which excludes my own writings) of key words from a thoroughly documented leaked tobacco industry memo combined with those from an alleged leaked fossil fuel industry memo, and see how many anti-tobacco activists crow about the way cigarette company activities compares to what’s implied in the other memo. What’s hard to miss in the search results is the appearance of the use of the tobacco memo as a talking point to lend unquestioned credibility to the alleged fossil fuel memo. If we had a responsible mainstream media, objective investigative reporters would delve into that problem, ask simple questions, and dig deeper if they spotted details leading to more problems. END_OF_DOCUMENT_TOKEN_TO_BE_REPLACED

Using absurdity to illustrate absurdity – one more example of how the claim that ‘climate change deniers are untrustworthy because they also deny the harm of cigarette smoking’ implodes under hard scrutiny. END_OF_DOCUMENT_TOKEN_TO_BE_REPLACED

What does that have to do with climate science? Absolutely nothing, and by God, any idiot knows breathing second-hand cigarette smoke can’t be good for you. So if anyone or any organization even remotely denies that it is at least harmful in some way, then those people are folks you want to avoid mentioning at all costs, so as not look like a fool yourself. This includes situations where those same folks dare to question the settled science of catastrophic man-caused global warming. It’s all a brilliant setup ….. but there is one eensy-beensy fatal problem here. END_OF_DOCUMENT_TOKEN_TO_BE_REPLACED

Exxon’s apparent disinformation campaign came right out of the tobacco companies’ playbook. Exxon even turned to some of the same groups that the tobacco industry had used to promote uncertainty about the dangers of smoking — this time to play up the uncertainty in climate science.

END_OF_DOCUMENT_TOKEN_TO_BE_REPLACED

I’ve said it many times, the entire global warming crisis can be boiled down to a three point mantra, “the science is settled” / “skeptics are industry-corrupted” / “everyone may ignore skeptic material because of points 1 & 2.” With the latest fixation on using racketeering laws to persecute companies and organization siding with skeptic climate scientists, a fourth talking point could be added, “when deniers persist with their industry-bought and orchestrated lies, they should be charged with crimes against humanity.” But the entire notion hinges on the insinuation that scientists who had even the most tenuous financial tie to industry donations were corrupted – paid to lie in a manner no different than shill ‘experts’ working for the tobacco industry who said smoking didn’t cause lung cancer. An insinuation so memorably compelling that ordinary citizen enviro-activists can regurgitate it with ease. END_OF_DOCUMENT_TOKEN_TO_BE_REPLACED

Back in my July 31, 2014 blog post, I asked that simple question. Just three days ago in the Shub Niggurath blog post “RICO-teering: How climate activists ‘knew’ they were going to pin the blame on Exxon”, I saw the answer in a quote from no less than the man running The Legacy Tobacco Documents Library himself, Stanton Glantz. Except, rather than it being a nice tidy answer, it instead only begs for questions of why it takes on the appearance of a major narrative derailment. END_OF_DOCUMENT_TOKEN_TO_BE_REPLACED

A brief set of questions and answers illustrates how any sort of examination of the ‘skeptic climate scientists are industry-corrupted’ accusation doesn’t reveal a nice, tidy, open-and-shut case against such skeptics, all that’s seen is something begging for a deeper investigation of why the accusation exists at all. END_OF_DOCUMENT_TOKEN_TO_BE_REPLACED