It’s one thing for assorted article writers, amateur private bloggers, prominent professional bloggers, reporters, and political advocacy groups to regurgitate the unsupportable insinuation that skeptic climate scientists are paid by Big Coal & Oil to lie to the public while working the old “leaked memo phrase” reposition global warming as theory rather than fact into the narrative, but it’s much more serious when this comes up in major global warming “costs” court cases.

I missed this news of this back in July: a 9/20/17 Reuters report summed up the situation in relation to another pair of more recent court cases (which I dissected in my previous post):

The court complaints for plaintiffs San Mateo, Marin, and Imperial Beach are pretty much all identical in wording, and the lawyer group for the plaintiffs nicely provides them in their entirety* , and . *[Author’s 5/20/21 note: Those link urls are non-operative now, they do function at the Internet Archive, and were otherwise altered slightly by the firm such that they do work here, here, and here.]

My automatic reaction, resulting from examining global warming lawsuits back in 2010 (updated here), is to look for the usual suspects accusing skeptic climate scientists of industry corruption along with anything that’s an indicator of the single source for that accusation. For ease of illustration, I’ll use the San Mateo filing to show how these complaints plow straight into the latter crippling problem after the start of their “Factual Background’s” Section E, “Defendants did not disclose known harrms … / Instead .. acted to obscure those harms.”

First, a quick screencapture photo link review for the benefit of new readers arriving at GelbspanFiles:

Now, on to one of the big problems in the July San Mateo / Marin / Imperial Beach court filings. They choose the murky path of citing the Union of Concern Scientists (UCS)‘ “Climate Deception Dossiers” as their source for those strategy/targeting memos. As I detailed in my July 9, 2015 blog post, UCS’ 2015 collection of the ICE public relations campaign memos is literally identical to Greenpeace’s 2007-era collection, with one huge exception: UCS leaves out Greenpeace’s page 1 cover explanation written by Ozone Action. Isn’t that strange? In my November 13, 2015 follow-up on this odd UCS situation, I explained how Greenpeace itself never bothered to tell anybody that they possessed these supposedly ‘damaging’ memos. Why would the authors of the San Mateo / Marin / Imperial Beach court filings place a ‘middleman’ in the way of their citation of leaked ‘industry’ memos when they could have cited a more worldwide famous organization ……. which didn’t seem to want to say they had these memos a decade earlier?

(Aside: The same question could be posed about the 2008 Kivalina v Exxon global warming nuisance lawsuit, where the citation for the ICE campaign strategy/targeting memos was, in part, the New York Times, which in turn said the source was the Sierra Club, which to this day acts as though the event never happened. Kivalina’s other citation isn’t one bit better. But, I digress)

But this problem gets one step worse for the Sher Edling lawyers representing San Mateo / Marin / Imperial Beach. At their law office’s website, they double down on the alleged “smoking gun” ICE PR campaign while inadvertently bringing in one of the ‘usual suspects’ often found accusing skeptic climate scientists of industry-paid corruption. Go to Sher Edling LLP’s current Press Room page (archived here), scroll down to the bottom of their page, and you’ll find a side-to-side scrolling variation of the above “Truth or CO2nsequences” timeline. The damaging bit here is who they cite as a source for the ICE advertisement (click to enlarge) 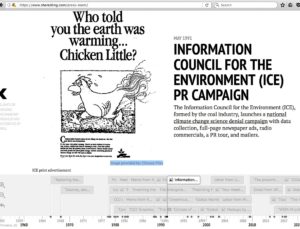 Who is Climate Files? This name warrants an entirely separate blog post. Suffice it to say right now, their website offers no names, but at least sends curious readers on to Climate Investigations Center, and CIC is run by a ‘usual suspect’ in my definition of the term, Kert Davies. That Kert Davies, who traces back to Ozone Action, a.k.a. here as the epicenter of the smear of skeptic climate scientists. Which, by the way, Davies doesn’t speak of in any form at his CIC website. Same lack thereof at his Climate Files site.

One more thing about Sher Edling’s reference to Climate Files: Notice how the logo at the bottom right of the old ICE campaign “Chicken Little” ad is cropped at the bottom. That isn’t something Sher Edling’s webpage is arbitrarily doing, it appears that way when you right-click on the image and choose the “view image” option, sending you to Climate Files’ page of it. What’s the problem here? Observe the red circles I added to the bottom of my screencapture of it. As I detailed in my December 19, 2014 blog post, that specific ad, in the form Greenpeace has in its scans, was likely never used — what’s cropped from Sher Edling’s and Climate Files’ version are the words “Informed Citizens for the Environment,” the proposed name for the campaign which was never used.

Problematic as all of that is, the San Mateo / Marin / Imperial Beach court filings contain one more potentially disastrous evidence problem, seen just a sentence after the bit about the ICE PR campaign. Namely, the seemingly damaging bit about a coal association president asking his members to contribute to the ICE campaign instead of sitting on the sidelines. Who does it cite as the source for it? Naomi Oreskes.

The monstrous citation mistake here is not so much risking inadvertent attention to Oreskes’ fixation with the ICE memos, and it doesn’t instead ultimately involve a source which prefers to remain quiet. Part of the blunder here is yet another indirect citation of a source, as in the above problem of citing the UCS when the San Mateo / Marin / Imperial Beach court filings should have directly cited Greenpeace’s archives. Here, they cite Oreskes, who cites “Greenwire 1991,” which in her guest chapter’s bibliography is spelled out as “Inside Track: Sowing the Seeds of Doubt in the Greenhouse”, Greenwire June 19 1991.”

The main problem arises when anyone attempts to view “Inside Track” in its full context. It cannot be readily found. [Author’s 10/12/18 addition: copy now found, details here]

In my timeline of publications mentioning the Western Fuels ICE campaign and efforts to tie the non-WFA strategy/targeting memos to it, the Greenwire 1991 “Inside Track” piece may be the earliest to quote those specific memos, but I can’t confirm that because, despite efforts dating back to 2010 to locate it online, I haven’t found it. In asking a reporter with more connections than I have if he could find it, he hasn’t yet, adding that his inquiry to the current organization owner of Greenwire only yielded the response that their archives did not go back farther than 2000 when they acquired Greenwire.

Rather than provide any real smoking gun evidence to the case, this last citation of Oreskes only begs for a pair of really troubling questions: are the lawyers for the San Mateo / Marin / Imperial Beach plaintiffs committing legal profession suicidal by citing evidence which is not available to read? Or have they opened the door to the political suicide of the entire global warming issue if they have Oreskes’ copy of that Greenwire piece? In my opinion she may very well be a key player capable of collapsing the credibility of the ‘crooked skeptics’ accusation because:

The twin San Francisco / Alameda Counties People of the State of California v. BP P.L.C., et al. cases and these San Mateo / Marin / Imperial Beach cases expect their Defendants to roll over without a fight, and expect reporters not to question anything related to ‘leaked ICE memos’ which turn out not to be evidence of an industry-wide public deception conspiracy. Tedious as it may be, a dive into each facet of the ‘crooked skeptics’ accusation will be richly rewarded because it all unravels no matter where anyone looks. If the public loses all faith in the notion that the fossil fuel industry pays skeptic scientists to participate in a giant denial machine, then there is no reason for anyone to ignore the detailed science-based climate assessments from those skeptics.
————————————————————————
Pt 2 in a 3-part series. Pt 3: “Introducing ClimateFiles.com”