Might as well save the trees and lower the carbon footprint of ink by either having one big 60 page+ lawsuit printout labeled “Fill-in-the-blank v. Various Oil Companies, et al.,” or better yet, a single piece of paper brought to all future courthouses with “Fill-in-the-blank v. Any Energy Company We Can Think Of, et al.” at the top, and “See County of San Mateo v. Chevron Corp., et al.” in the middle. Problem is, the recent craze of communities suing to recoup costs associated with man-caused global warming only amplifies the fatal problem within all of these lawsuits.

This problem is comparable to the way the ‘Russia colluded with Trump’ story is unraveling. In that situation, the court warrant justifying a Federal-level investigation hinges on faulty evidence — the Steele Dossier — which wasn’t exactly forthcoming on particular details, and the underlying notion is that Hillary Clinton would have won the 2016 U.S. presidential election (her inherent political weaknesses aside, of course) if the Russian government hadn’t meddled in it. The false premise is that she was above reproach in the first place, no different than the premise of catastrophic man-caused global warming being settled, and both must be protected at all costs right up to the current day.

One of the ways to steer the public away from taking skeptic climate scientists’ science-based rebuttals seriously is to imply that such critics are no more than a handful of shills paid to lie and to spread misinformation by executives of greedy energy industries. Just like the Russian collusion story, that’s where the fatal fault is found – there’s only one bit of evidence which remotely resembles a pay-for-performance arrangement between industry people and skeptic climate scientists: a set of leaked memos where the strategy was to “reposition global warming as theory rather than fact,” and where the targeted audience was “older, less-educated men” / “young, low-income women.”

In early summer 1991, The Energy Daily and the New York Times were the first major publications quoting the targeting and strategy phrases, and among the first three major global warming lawsuits, both the Comer v. Murphy Oil lawsuit and the Kivalina v Exxon one (led by attorney Matt Pawa – hold that thought for a moment) quoted those same ‘leaked memos’ as evidence to support the idea that oil companies knew their product was causing global warming and that there was a need to hire ‘shill scientists’ to broadcast a contrary message to the public.

This memo set, when read in its full context, looks nothing like the sinister industry campaign it’s portrayed as. Global warming alarmist book author Ross Gelbspan attributed them straight to the Western Fuels Association’s “Information Council for the Environment” (ICE) public relations campaign, which was dutifully regurgitated as such by others who cite science history professor Naomi Oreskes. However, Oreskes cited Gelbspan as a source while claiming the memos were archived at a particular location when they were not, and these particular strategy / targeting memos are ultimately worthless as evidence because they never were part of Western Fuels’ ICE campaign, nor were they a marching-order industry directive to be followed anywhere else.

As I detailed in my October 12, 2017 blog post, last summer’s three San Mateo / Marin / Imperial Beach v. Chevron lawsuits regurgitated those ‘leaked memos’ in essentially the same boilerplate fashion — where they are labeled in a citation source as “a dossier” …… which itself turned out to be not especially forthcoming on important details.

Now, it seems, this boilerplate-style method of bashing out global warming lawsuits is continuing this year in cringeworthy repetitions. Click on each image to enlarge: 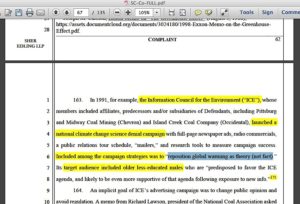 The thing that is a little different here is how this County of San Cruz filing doesn’t include the “younger, lower-income women” targeting phrase seen in the San Mateo / Marin / Imperial Beach v. Chevron filings. 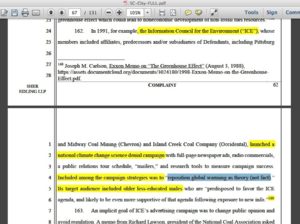 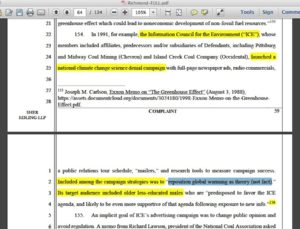 All three cite the ‘dossier’ seemingly created by the Union of Concerned Scientists, and all three feature the same additional bit of quoted evidence seen in the San Mateo / Marin / Imperial Beach v. Chevron filings which is sourced from Naomi Oreskes – which itself is a hugely problematic situation begging for deeper investigation, as I suggested in the second half of my October 12, 2017 San Mateo / Marin / Imperial Beach v. Chevron blog post.

So these three latest filings are little more than copy ‘n paste of the San Mateo / Marin / Imperial Beach v. Chevron cases. The City of Los Angeles might be the next one added to the pile.

But as I pointed out in my January 24, 2018 dissection of the City of New York v. BP PLC filing, connections can be made within all of these global warming lawsuits. One of the key lawyers in that case, Matt Pawa, ties straight to Naomi Oreskes’ 2012 La Jolla, California ‘let’s-nail-fossil-fuels-companies’ workshop, and his former email address ties straight to two other individuals seen in a January 2016 ‘let’s-nail-fossil-fuels-companies’ leaked email, and those two other individuals originally worked at the small enviro-activist organization which gave the “reposition global warming” strategy memo its first real media traction. A memo strategy phrase which Oreskes prominently featured in the same book chapter that’s cited in these California lawsuit filings, and the same one Al Gore mentioned in connection with Exxon back in 2008. And let’s not forget that Gore name-dropped Oreskes when he appeared with NY AG Eric Schneiderman at the news conference where Schneiderman pledged to ‘nail fossil fuel companies.’

Exxon seems to wonder about connections in these cases. In their January 8, 2018 “Verified Petition For Pre-suit Depositions Of: Matthew F. Pawa [et al.]” court filing, there is this gem on page 49:

ExxonMobil seeks to obtain testimony and documents from Respondent Pawa about a variety of topics, including, but not limited to: (i) Mr. Pawa’s attendance at the La Jolla conference; … (iv) Mr. Pawa’s communications with climate change activists, including, but not limited to … Oreskes; (v) Mr. Pawa’s attendance at the March 29, 2016 press conference during which state attorneys general pledged to use law enforcement power to impose their viewpoint on climate policy and closed-door meetings held before the conference; (vi) Mr. Pawa’s communications with various attorneys general, including with the New York and Massachusetts Attorneys General; (vii) Mr. Pawa’s discussions with third parties about the filing of July 2017 and September 2017 lawsuits in California.

It’s plausible that the collective forces opposing the election of President Trump thought nobody would check into their efforts to topple Trump. Rather than the efforts working as planned, they appear to be falling apart, and it’s all leading to deeper examination of where all those efforts originated. If Exxon and objective unbiased journalists dig deep into the people and accusation ‘evidence’ behind these latest global warming lawsuits, the entire idea that ‘shill scientists are paid industry money to reposition man-caused global warming science as a theory rather than fact in the eyes of the public’ could unravel in a similarly spectacular way.