I was alerted by a prominent climate scientist to an embargoed “New Harvard study puts a number on what ‘Exxon knew’ decades ago about climate science” news release out of Harvard University the day before it was released on January 12th, concerning Geoffrey Supran’s then-upcoming January 13 Science magazine publication of his “Assessing ExxonMobil’s global warming projections” paper. The news release mentioned Geoffrey Supran’s name but not Naomi Oreskes – she, of worldwide “Merchants of Doubt” book author / documentary movie star fame. That struck me as being a bit odd since Supran owes his rising fame entirely to Oreskes, he’s not the least bit subtle about pointing his inclusion within her aura. So, I added the words “Supran’s mistake is believing in his own publicity!” to the email subject line of my reply back to the person and others included regarding the embargoed news release.

I underestimated just how much bigger his ego might be inflated. However, the more a person believes in their own publicity, the more susceptible they are to crippling deflation of their ego. For those unaware of it, Geoffrey Supran is a very weak link among the accusers who are desperately trying to keep the “industry-paid skeptic climate scientists liars-for-hire” accusation alive.

Witness how useless he was to his boss at this U.S. House hearing on one very simple question. Imagine now if his boss was nowhere to be seen, and he alone is confronted with question after question on how he defends the idea that skeptic climate scientists were in collusion with fossil fuel industry executives in disinformation campaigns created to deceive the public.

For some odd reason, his handlers seem to be oblivious to this problem, he’s having fame heaped on him today like there’s no tomorrow. The initial two-day hits alone for the news of his “Exxon predicted” paper were huge. In the daily email alerts I receive from Google for search results of news stories containing the specific words “global warming,” the January 12th results of 55 or so individual overall articles contained the words Exxon in both the titles and two-line blurbs 50 times, with only one exception not referring straight to the news of Supran’s paper, while also containing the word “predicted” 22 times, the word “prediction” 7 times and the word “projections” 12 times. E.g., the Toronto Star‘s “Oil and gas giant Exxon predicted extent of global warming” / Fortune magazine’s “Exxon’s secret decades-old predictions” / the Dallas Morning News’ “Exxon nailed global warming projections decades ago.” Naomi Oreskes got only cursory mention in just those last two examples.

It got thicker in January 13th’s Google email alert results. Among the 50 overall “global warming” results, the “Exxon” tally went up to 73 times, “predicted” increased to 35 times, “prediction” up to 9 times. Supran’s name up in lights now as far away as Bangkok, Thailand, complete with pre-prepared remarks at the ready. 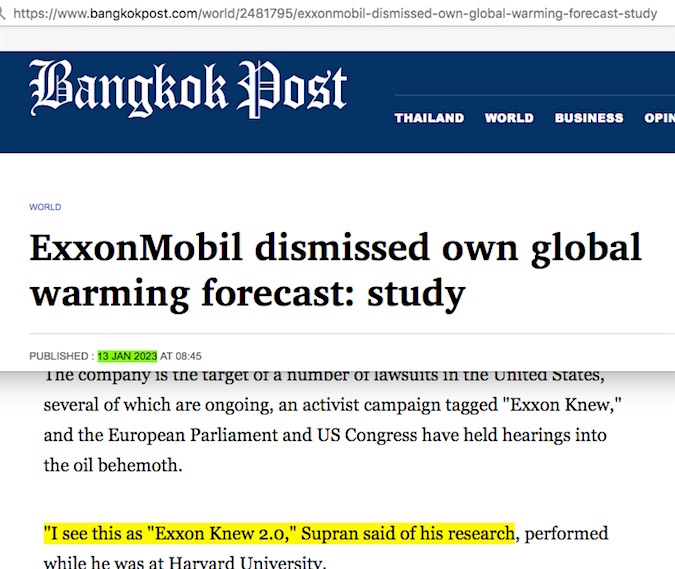 Not even a week later, the internet results for “Exxon predicted” and related variations are staggering. Do a search on just his name by itself. Pretty slick public relations system there, huh? Just a little suspiciously too slick, maybe, leading to questions of who arranged for all this publicity? Is this something that can be done via efforts that need to be kept hidden? Dare we term these sorts of efforts “well-organized, well-funded disinformation campaigns”?

Potentially, after intense, objective investigation, that latter question on funding might be revealed after deeply examining a clue at the end of the news release about Supran’s paper:

The paper’s Acknowledgments state that this research was supported by Harvard University Faculty Development Funds and by the Rockefeller Family Fund.

For anyone who forgets, the Washington Free Beacon featured a leaked email in its “Memo Shows Secret Coordination Effort Against ExxonMobil by Climate Activists, Rockefeller Fund” report about efforts to vilify Exxon in the public eye, where the topmost name on that email plan was Lee Wassermann, who is still the head of the Rockefeller Family Fund. Scroll down the RFF staff list and you also see Assistant Director Lisa Guide. Who is Lisa Guide married to? Ex-head of Greenpeace John Passacantando, I detailed that in my December 11, 2020 blog post, along with how their same residential neighborhood house is somehow the headquarters of Passacantando’s mystery ‘water services’ company that got a 2019 Coronavirus loan to help pay the payroll of his 17 employees — but I had to update my other blog post about the money pouring into his LLC company, where we now see that he was paid over $3 million in the same year he got that loan.

I routinely highlight Passacantando’s name in the above-noted leaked 2016 email along with another name, Kert Davies, who heads the Climate Investigations Center. A later Free Beacon report noted how Davies’ CIC is apparently a recipient of Passacantando’s dark money.

Davies’ CIC is the platform for his “Climate Files” pile of documents. How many times does Geoffrey Supran’s January 13 Science paper cite Climate Files? 10 times.

Supran’s paper is vilifying Exxon. Sheer coincidence? Or would that RFF grant money dry up the moment Supran says Exxon could not have “known since the late 1970s that its fossil fuel products could lead to global warming” considering how much of an uproar was being made back then about the impending global cooling? Or would it continue to flow uninterrupted if his paper went out of its way to insert an unsupportable talking point about the “myth of the ‘global cooling craze'”? Guess what, that talking point is actually in there. 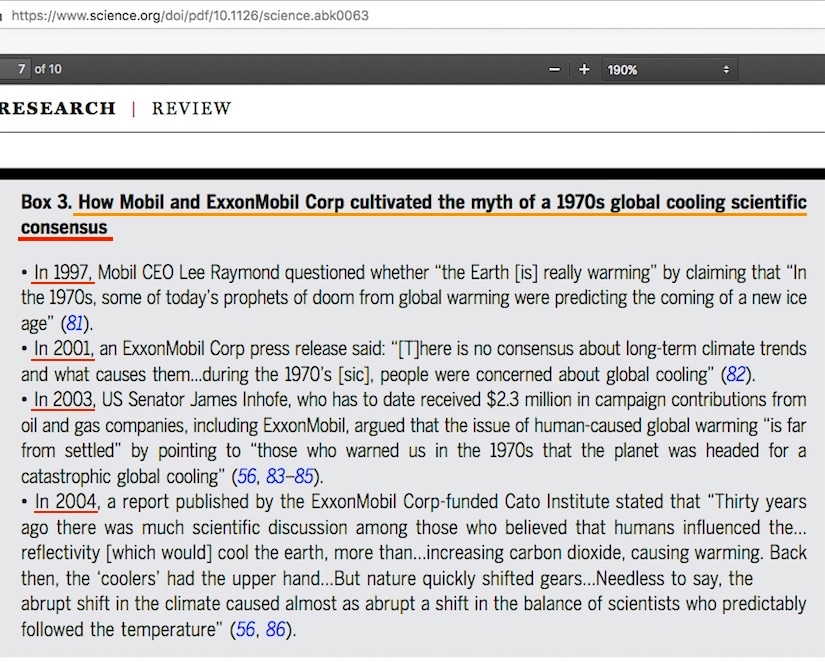 Except Supran didn’t use the word “craze,” he used his boss / paper co-author’s anti-science word “consensus.” Don’t forget, Al Gore used Oreskes’ 100% science consensus claim as a segue point in his 2006 movie to lead straight into his comparison of an old tobacco industry memo to the “reposition global warming” memo.

No science conclusion in the history of the Scientific Method has ever been validated by a show of hands opinion count, science does not work that way. Concern – at an international level, at a U.S. Federal level (including CIA assessments about national security) and advice to President Nixon – about the impending global cooling crisis happened. Exxon ‘created’ no such mythology, it was reported in abundance for at least three decades, and there is no possible way Exxon would have known that all that reporting/official advice was false or just spectacularly wrong and their own looks into the possibility of a warming world was above reproach.

One more bit about funding and Supran’s boss: would that RFF grant money dry up if Supran questioned a single word Naomi Oreskes ever said about particular never-implemented (never implemented!) ‘leaked documents’ being smoking gun proof of industry-led disinformation campaigns?

The problems for Supran within his latest supposedly “peer-reviewed” Science paper don’t end with just questions about its funding. Did his ‘peer reviewers’ question anything about his assertions within the paper?

For example, right in his the first paragraph of the main body of the paper, where it is implied that ‘electric utilities knew’ about fossil fuels causing global warming but engaged in disinformation campaign to cover up that knowledge. What’s seen among Supran’s citation sources 5 through 9, indirectly reinforcing the ‘disinformation campaigns’ angle? Dave Anderson’s 2017 “Utilities Knew” report, the report of which I first detailed in my April 11, 2020 blog post was enslaved to ye olde worthless “reposition global warming” memos as its proof that electric utilities engaged in public disinformation efforts. It’s the same Anderson report I described in my September 2022 dissection of another “peer-reviewed” paper, where Anderson’s false claims imperils that paper’s credibility, and that paper in turn showcases how the overall peer review process falls apart for these kinds of science journal political accusation “papers.”

Piling on: no further than the next paragraph in Supran’s paper, he notes that 1) multiple lawsuits now accuse Exxon et al. of deceit and responsibility for climate damages, citing the Sabin Center as the source; 2) the Massachusetts AG’s lawsuit alleges Exxon et al. “knew” of the harm of its products but waged deception campaigns that misrepresented their knowledge; and 3) that particular “civil society campaigns” are holding Exxon et al. accountable for such deception – Supran has a whole box on the next page citing “examples” of such action.

Right. And what evidence do all the sources have to back up the deception accusation – specifically the existence of industry-led disinformation campaigns? 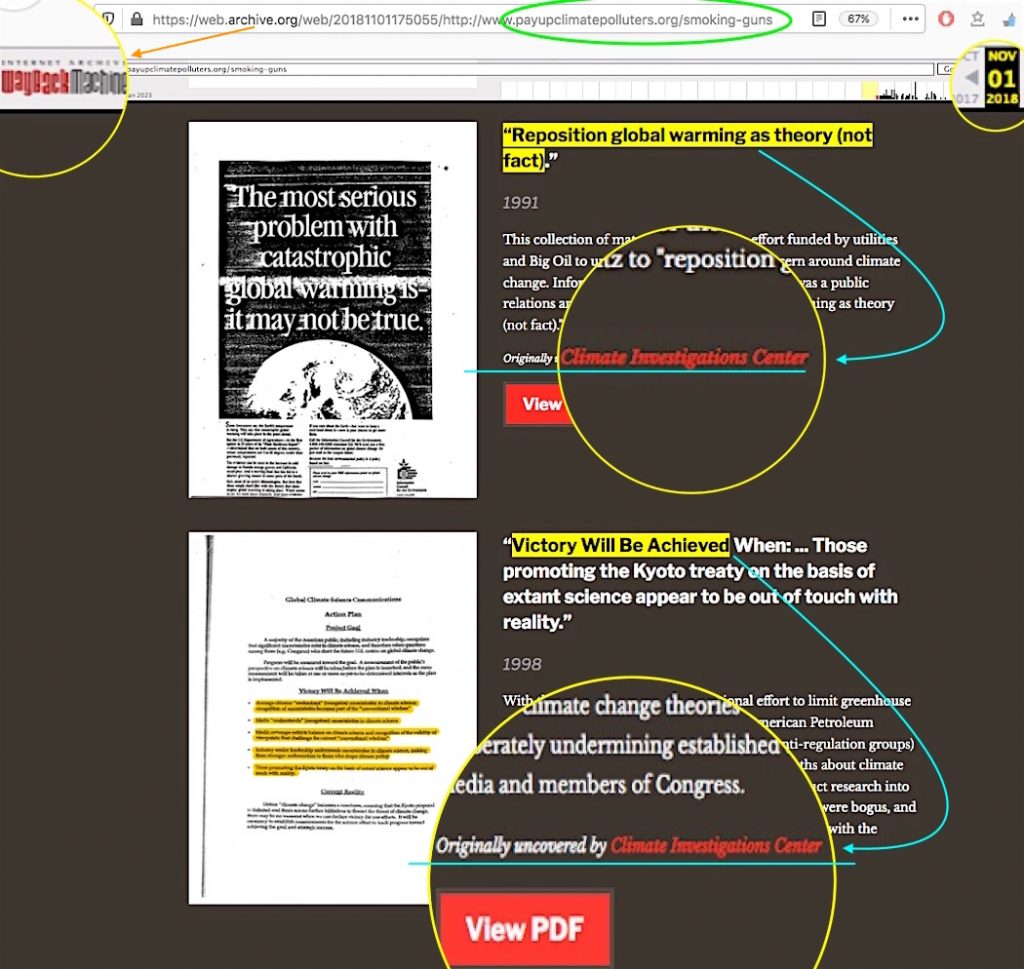 I have critics supposedly from my own side of the issue who say I’m repeating pointless conspiracy theory.

The people who’ve repeated unsupportable conspiracy are a core clique of accusation promulgators who’ve pushed this arguably defamatory accusation for decades, along with whatever weak link associates they recruit along the way. The very best evidence they have in their arsenal about Big Coal & Oil colluding with skeptic climate scientists in disinformation campaigns happens to be the the worthless “reposition global warming” memos and the worthless “victory will be achieved” memos. The accusation repetitions will stop when someone in this group is finally held accountable in the most public way possible. Start with the weakest among them, who may actually fear how their legacy might end unless they see a way to save their own skin, and an entertaining domino effect may ensue.

Any given effort to push false accusations is only as strong as the weakest link in that whole effort.