Never lose sight of how Al Gore said at the 2008 Davos conference that “Exxon Mobil has funded 40 different front groups that have all been a part of a strategic persuasion campaign to, in their own words ‘reposition global warming as theory rather than fact.’” And don’t forget how Gore was a prominent part of a March 2016 announcement by seven Attorneys General (including Massachusetts AG Maura Healey, led by NY AG Eric Schneiderman) regarding their prosecution of Exxon, where he cited Naomi Oreskes in reference to the way Big Oil employed the same people who operated in disinformation campaigns for the tobacco industry to hide the harm of cigarette smoking.

Do these Attorneys General-led New York / Massachusetts lawsuits against Exxon present evidence to back up that accusation? Not so much. Or strangely, not at all for the New York one.

The focus of the NY State lawsuit (with interim AG Underwood’s name on it due to Schneiderman’s ‘abrupt departure’) could be summed up with just its claim on page 85 about “Exxon did not incorporate climate change regulatory risk into its business processes in the manner it represented to investors.” Good luck proving that nebulous claim.

In fact, the New York AG’s office did not. According to a days-old court decision, the lawsuit failed to prove that Exxon violated investor protection laws. Meanwhile, any connections to the Gore-Oreskes-Gelbspan accusation about ‘fossil fuel industry-corrupted skeptic climate’ scientists in this overall New York AG lawsuit situation are confined to Al Gore speaking initially on its behalf, how Naomi Oreskes openly admitted to meeting with AG Schneiderman before he began his prosecution efforts, and potential problems of attorney Matt Pawa’s ties to this situation. Those problems, and potentially deeper ones surrounding that, along with Gore’s, Oreskes’ and Pawa’s ties to Ross Gelbspan, are what should really be the focus of lawsuit investigations, on behalf of skeptic climate scientists who may have suffered genuine harm as victims of libel/slander.

Then there’s Massachusetts AG Maura Heleay’s recently filed lawsuit against Exxon. To her credit, she’s a little more aggressive about regurgitating the worn-out accusation about the fossil fuel industry engaging in a tobacco industry-like disinformation campaign. On page 6 of the filing, we get to see yet another reappearance of ye olde worthless American Petroleum Institute “Victory will be achieved when…” memo. Always a good idea to toss that one in, so that it doesn’t look like you only have one solitary bit of ‘leaked memo evidence’ to claim the oil and coal industry orchestrates disinformation campaigns.

But watch this, from page 46 of that filing: 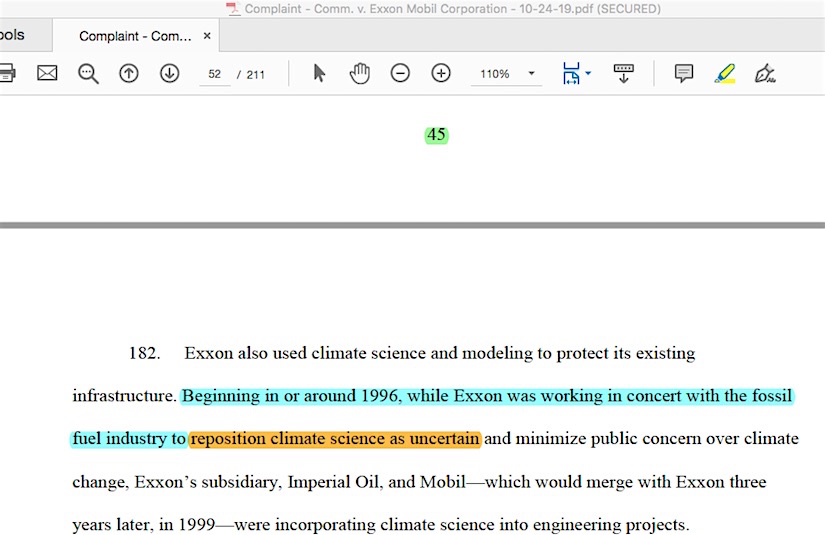 Does anyone actually believe it’s pure coincidence that this phrase sounds similar to “reposition global warming as theory rather than fact,’ the phrase that’s been the favorite smoking gun leaked memo ‘evidence’ to indict skeptic climate scientists of industry-paid corruption for the last 20+ years?

But worse for this particular lawsuit, it has exactly zero footnotes to cite the source of that accusation.

Somebody of major prominence needs to ask Massachusetts Attorney General Maura Healey what the exact source is for that particular accusation, and whether anybody in her office checked the veracity it.

It’s the simplest of all questions to ask. The complications arise when the answers ultimately implode the entire ‘crooked-skeptics-on-the-payroll-of-Big-Oil’ accusation.

Exxon’s lawyers could drive a stake through the heart of that accusation against them once and for all if they asked that question. Congressional representatives and senators could become heroes and heroines to their constituents if they posed that question to enviro-activist ‘expert witnesses’ appearing at governmental hearings. And beleaguered mainstream media reporters could regain their status as objective journalists if they sincerely asked that question and investigated any inconsistencies surrounding it.