This requires two setup points. First, in my February 13, 2020 blog post titled “Joke: ‘Why did the Greenpeace USA Executive Director cross the Road?’,” I covered how the founder of the long forgotten environmental group Ozone Action subsequently merged his little group into Greenpeace USA and took over there as Executive Director, only to inexplicably step down eight years later into what looked like the oblivion of an utterly inconsequential, one-man operation apparently pointlessly named “Our Next Economy LLC” which had practically no internet presence outside of his rather bland blog page ….. while getting, as late as what’s seen in a 2017 IRS 990 form, at least $2 million in income. The main question arising out of all the details in that post is whether his long-term promulgation of a worthless set of leaked industry memos, which gained their first major ongoing media traction in his dinky Ozone Action group as a go-to source for indicting skeptic climate scientists of industry corruption, is being facilitated into the latest set of global warming lawsuits, e.g. the two month-old Maui v Sunoco one, via millions of dark money dollars poured into his mystery Our Next Economy LLC operation.

The second setup point is that the U.S. Government’s “Paycheck Protection Program” was created to help shuttered small businesses to keep their workers employed during the current virus pandemic situation.

So now, I could have actually titled this post as “Joke: What do you get when you cross a small business bailout loan with a one-man operation swimming in millions in cash?” The thing that investigators need to ask is, what on Earth is going on here?

No joke, I added a note at the bottom of my February 13 post how an additional $375,000 grant is seen in a 2018 Tides Advocacy IRS Form 990 going into Passacantando’s Our Next Economy, and if the rising tide of $1.3 million+, $1.5 million+, and $2 million+ was any indication of the trend for yearly payments from Sustainable Markets Foundation, then SMF’s 2018 Form 990 would show even higher million dollar amount.

I haven’t found SMF’s latest IRS Form 990 yet, but I’m actively looking out for it. What I have found is something else:** [** 12/22/20 addition: The link has subsequently been updated to pinpoint the exact loan amount, to what is a near-maximum one.] 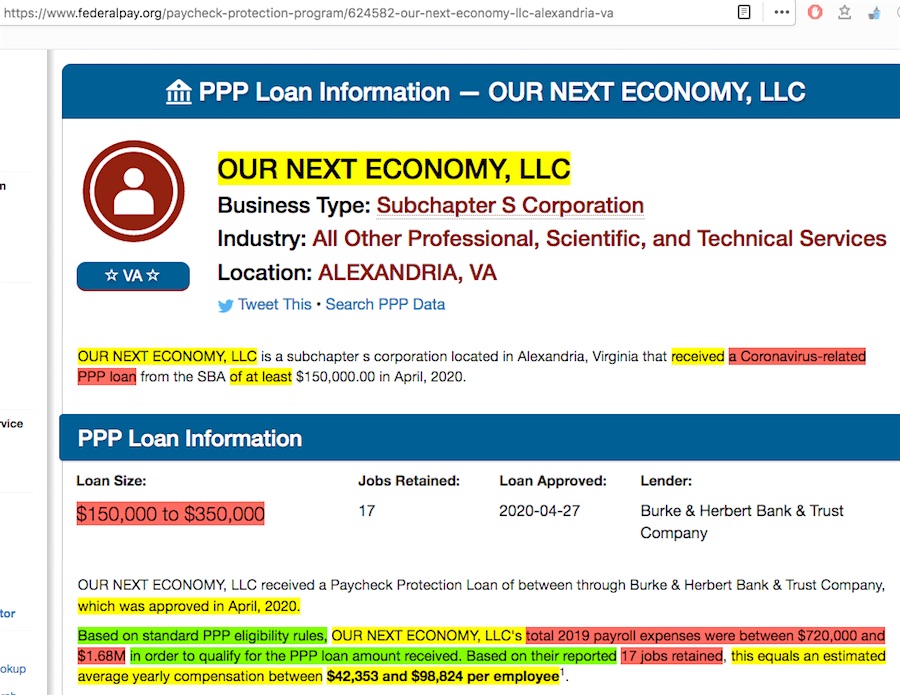 Notice also that, whatever the Our Next Economy company actually does, it falls under the category of engaging in “the provision of professional, scientific, or technical services” (with lots of exceptions to that), according to the North American Industry Classification System (NAICS) Association.

This PPP Loan is corroborated by no less than CNN in their larger story about the $380 billion dollar payouts for PPP loans, within their specific entry for Our Next Economy. The ProPublica has the same information within their effort to track “Coronavirus Bailouts.”

Consistent in all of these IRS forms and PPP loan information pages is the physical address location for Our Next Economy. As a small matter of courtesy regarding Passacantando’s privacy, I won’t spell out the address in this post, but it is not only visible in my screencapture images, it’s publicly available online. What happens when a combined internet search is done for that address and “Our Next Economy”?

One result is a page at Cotera, a company having a database of credit interactions for small businesses. Their page for Our Next Economy says,

OUR NEXT ECONOMY LLC is in the Water Transportation Services, N.E.C., industry in Alexandria, VA. This company currently has approximately 1 to 5 employees and annual sales of Under $500,000.

Well, the tally for the employees could seemingly be describing a one-person operation, like what Passacantando’s long ago-disappeared blog looked like, with its basically irrelevant posts (notice the “Lee Wasserman” guest appearance in that screencapture). But did he turn his back on his 30 year career of ozone depletion / global warming environmentalist awareness efforts to become a water tank truck driver or a water pipeline inspector? And to save paper and printing expenses, he’s keeping the company name he founded in 2009 and crossing out “environmental activism” on his business cards while penciling in “Water Transportation Services”?? The problem there is that the official designation for “Water Transportation Services, Not Elsewhere Classified” does not involve the literal transport of water, it is boating services – canal operation, for example.

Or did Passacantando sell the property and the new business owners keep the name “Our Next Economy” out of sheer laziness? Keep in mind, the property is a 5-bedroom, 3-bath 3,000+ sq ft house in a residential neighborhood with zero indications that it contains a business of any kind. Is there any indication that Passacantando is not there anymore?

Since Passacantando was listed as the operator of his business at that address in 2009, a Realtor.com statement that the property “was last sold in 2002” would indicate that he’s still the property owner. An October 2017 invitation for a political postcards-writing event is seen at that address, identified as “Lisa Guide’s House.” The ClustrMaps “Public Records Encyclopedia” page for that address, updated as recently as September 26, 2020 shows Lisa Guide as a resident, along with a cryptic reference to another “John John” resident.

Lisa who? Lisa Guide is the Rockefeller Family Fund’s associate director …. and she is prominently married to John Passacantando, they’re photographed together at Washington DC high society dinner events.

Is her yearly salary lower than six digits? Has she formed her own water services company as a side venture and borrowed her husband’s LLC name as some kind of an inside joke?

To repeat what I said in a prior blog post, I make no accusations here, I’m not a reporter, and I have limited investigative resources. I just point out what I see, and there are plenty of questions to ask about this situation with Passacantando’s little company, such as:

Just askin’. If I get answers from people who can dig deeper than I can, I’ll post them here as updates. Stay tuned.