It’s a propagandist’s dream to see reporters repeat blatantly false stories about supposedly devastating leaked industry documents revealing hidden corruption, even when the reporters get basic details of the docs wrong — so long as neither the reporters nor anybody else questions those basic details. It’s a propagandist’s nightmare when too many storytellers describing the revelations can’t keep the overall story straight, whereupon the revelations cease to resemble a bombshell story and instead increasingly look like an orchestrated propaganda disinformation effort.

“Want proof?”, enviro-activists predictably say, “Look no farther than secret memos leaked out of that industry, like the one from Exxon where their own words said they wanted to ‘reposition global warming as theory rather than fact,’ and where they said their ‘victory will be achieved when the media understands uncertainties in the science.’ The tobacco industry did exactly the same thing. The big-name scientist oil shills are like interchangeable hood ornaments in this scam.” 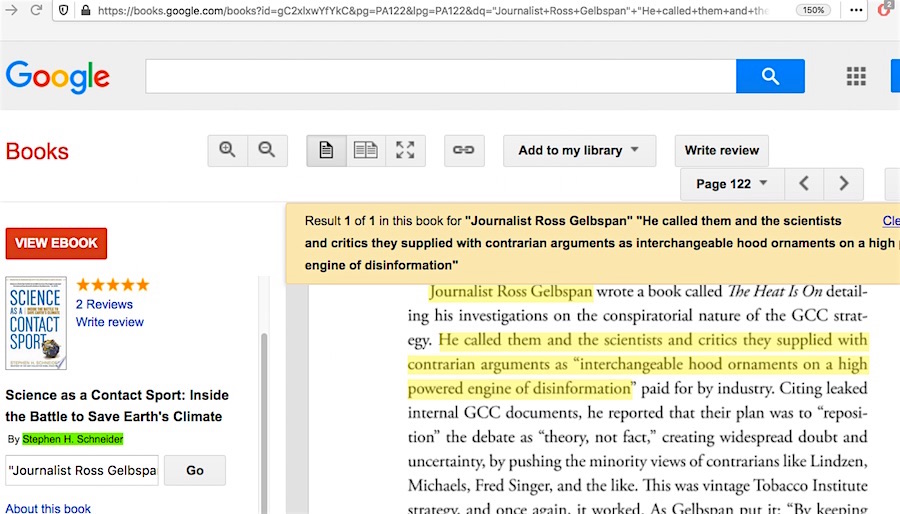 “That looks really bad,” says the average, otherwise disinterested citizen. “Now, I can ignore what those shills say, because whatever they say, it can’t possibly be true.”

The propagandists smile at that reaction, crossing their fingers in hopes that no average citizen or traditional objective reporter or politician says, “Wait, could I see those leaked memos in their full context? Who found them?”

The first time I saw someone mention those “reposition global warming” memos, it didn’t register what they were. Not so from the second re-read of that story.

“Repositioning? What a weird way of putting that. Is that what the memos really said?”, I asked.

As I explained in my October 22, 2015 blog post, it took me seven months to find the actual memos with that phrase, and the phrase looked utterly out of character with the rest of the documents for the Western Fuels Association’s “Information Council for the Environment (ICE)” public relations campaign, which I later discovered was not the massive, influential PR campaign it was portrayed to be. The typographical letter style of the memo subset didn’t look right, either, and after deeper digging, I learned how the “reposition global warming” memos subset was a separate unsolicited suggested names / audience targeting proposal that was never part of the genuine ICE campaign.

Along the way in this inquiry process, I ran across the other “fallback” set of memos that enviro-activists are enslaved to for claiming skeptic scientists are industry-paid crooks: the leaked (stolen, even!) American Petroleum Institute (API) “Victory Will Be Achieved …” memos. In my blog category encompassing these API memos, I detail how the memos don’t remotely resemble an actual disinformation plan, along with myriad other faults surrounding them.

Become familiar enough with the deep details of these two totally unrelated memo sets, and it looks downright comical when truly errant tales of them are found, such as the one I briefly described in my February 23, 2015 blog post, where the late columnist Molly Ivins strangely put the API name on the “reposition global warming” memo set: 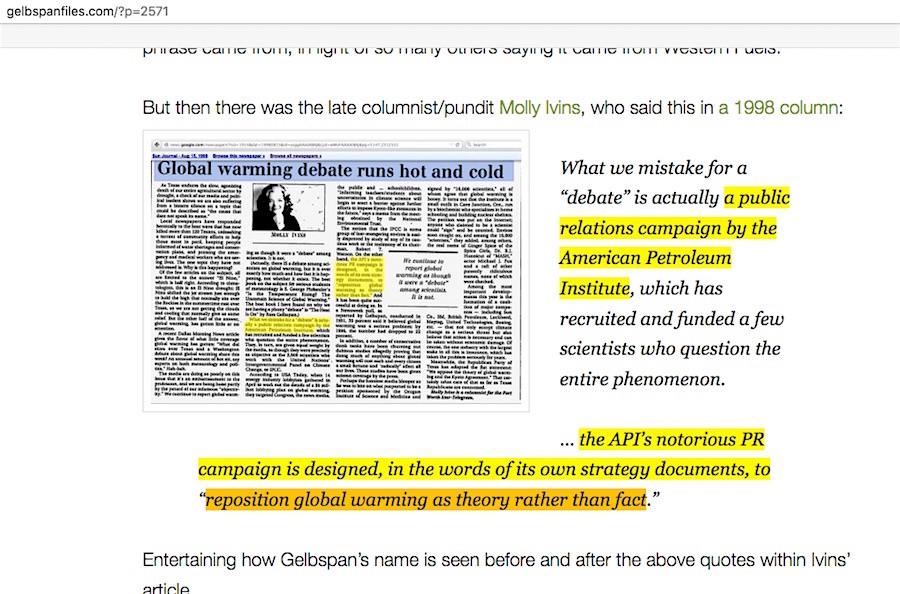 If that merely looks like a botched name typo, have a look that this 2016 French language report, where the translation of it clearly shows the blunder of the ‘reporters’ saying the full context of the “reposition global warming” memo set could be seen at Evert Wesker’s website page, which, as I showed in my February 19, 2020 blog post, was for the API “Victory Will Be Achieved …” memos only. 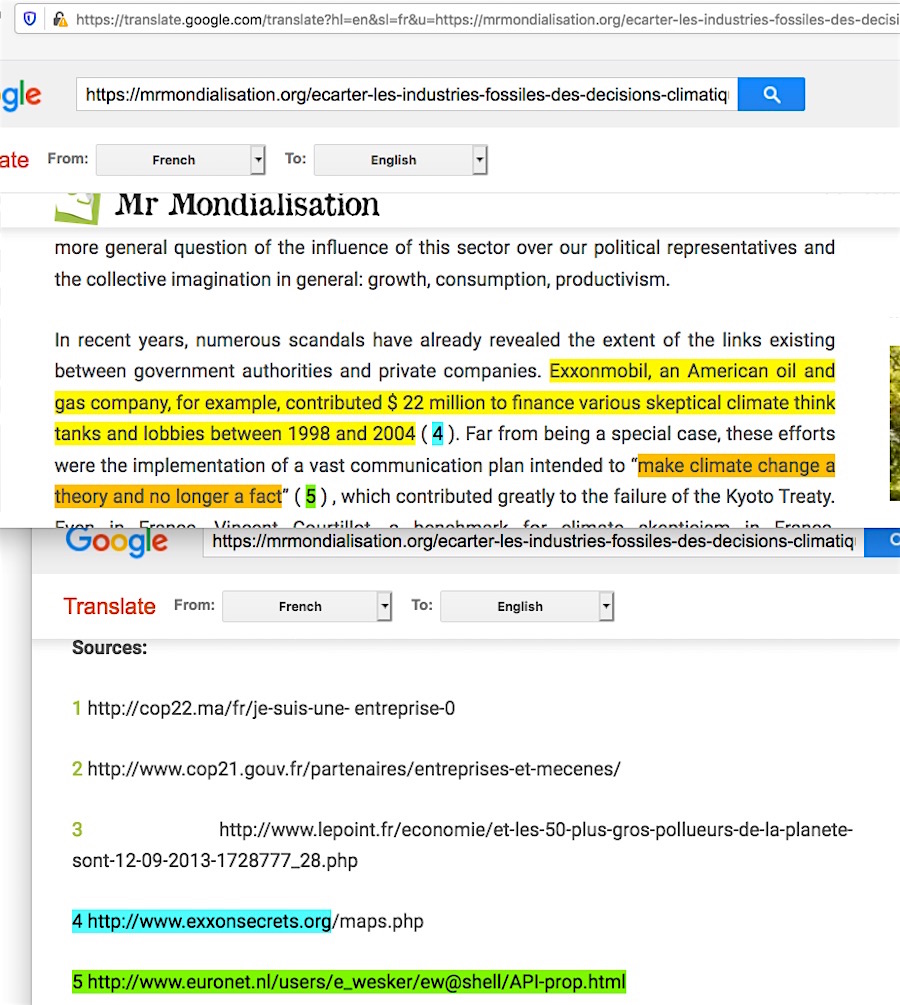 (Notice in that screencapture that I’ve also highlighted end note #4 for Greenpeace’s ExxonSecrets website, which had been under the management of Kert Davies three years earlier, before he left Greenpeace. Hold that thought, however, until I bring up the overall problem with this particular citation source in my upcoming ‘part 2’ blog post.)

Overall point being, minus the faults in these stories, they sure look devastating, don’t they?

Until very recently, I thought this sort of journalism was the result of reporters/authors independently gathering their own sources and reporting about it. When I previously saw clearly ineptly done reports like the ones above, I simply wondered how such people who otherwise offer very detailed information could make such boneheaded errors of assumption about the details.

Lately, however, increasing amounts of narratives ranging from ordinary articles to state-level global warming damages lawsuit filings are appearing with clearly similar ‘research detail errors,’ or are beset with similar dubious evidence citation sources to what could now be termed the dual hood ornaments of the leaked “Victory will be achieved …” / “Reposition global warming” memos.

This situation now prompts an elemental question:  is it plausible that there’s a specific reason these accusation reports appear to conform to a particular pattern?
————————————————————————
Please see what is basically 2 on this: “What Does Nearly $5 million Buy?”