At the end of my August 7th blog piece, I mentioned how any prominent person insinuating that industry money corrupts skeptic climate scientists seems to be separated from Ross Gelbspan by three degrees or less. If we see that small separation between him and someone involved in the event that supposedly confirmed his suspicions about ‘corrupt scientists’, what might turn that into a problem?

Starting on page 39 of his “The Heat is On” book, Gelbspan goes into lengthy detail about the late spring 1995 Minnesota Public Utilities Commission hearings where skeptic climate scientists were called to testify. In a 2008 interview similar to the ones I noted in my last blog piece, we are treated to his reason for attending the hearings (10th paragraph, bold emphasis mine):

Gelbspan coauthored for The Washington Post a story on the health impacts of climate change, collaborating with Harvard University epidemiologist Paul Epstein. To Gelbspan’s surprise, readers wrote to tell him he’d been misled, that there was no scientific evidence that global warming was taking place. …

At the letter writers’ suggestion, Gelbspan looked into the work of climate-change dissenters, … Richard Lindzen and Pat Michaels.   … Having prided himself on his accuracy throughout his long career, he began to feel alarmed, …. For a few days, he anguished over the possibility that Epstein had gulled him into some kind of fraud. Yet after carefully reviewing the evidence, he concluded that Epstein in fact belonged to the respectable mainstream of climate scientists ….  At that point, Gelbspan’s worry turned to outrage.

When he learned that some of the climate skeptics would be testifying—and be compelled under oath to reveal their funding sources—in St. Paul, Minnesota, where administrative judge Allan Klein was reviewing the environmental costs of coal-burning by the state’s power plants, Gelbspan resolved to use his own savings to fly out to cover the hearings.

One of the people questioning skeptics on behalf of the Minnesota Pollution Control Agency was an assistant AG from the Minnesota Attorney General’s Office, Barbara Freese. In a general sense, we are left to wonder why high-level lawyers would be expected to comprehend the complex climate science details offered by PhD-level scientists. A better question, however, would be to ask exactly how the questioners came to know the detailed information about the skeptics’ associations with anything related to the fossil fuel industry. Plus, how could Gelbspan have possibly known with any certainty that the topic of funding would even be brought up, since scientific conclusions ought to stand on their own merits regardless of what brought them about?

The first question is beyond my scope. Trust me on this, though, one of my goals is to find out what prompted the lawyers to have such an intense curiosity about skeptics’ funding.

For the present time, I find it fascinating that, when Ms Freese mentions on page 191 of her 2003 “Coal: A Human History” book that the coal industry “launched public relations campaigns to influence public attitudes, including some highly misleading ones.…”, it comes as no surprise that her end notes supporting her assertion says:

Pages 190-191: For a detailed account of the sustained and often misleading campaign by coal and other energy companies to minimize climate change fears and influence public policy, see Gelbspan.

Or that she thanks Ross Gelbspan in her Acknowledgements section. Or that the back page of her book has a blurb square in the middle of it from…. guess who? 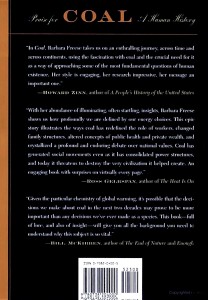 With her abundance of illuminating, often startling insights, Barbara Freese shows us how profoundly we are defined by our energy choices  …..  An engaging book with surprises on virtually every page. — Ross Gelbspan, author of The Heat is On

Perhaps one surprise is that she did not label him as a Pulitzer winner.