The March 26, 2006 ABC News quote I put in the main blog banner illustration above is a case study on how the news media repeats the basic accusation against skeptic climate scientists, and steers us to what is supposed to be devastating reporting by an unimpeachable source:

Perish the thought of the news media actually giving skeptics a fair shot at defending their science assessments, such as the way the PBS NewsHour has demonstrably excluded them from its program for 17+ years. Otherwise viewers might perceive a significant flaw with the “misinformation” accusation. But since we are talking about journalists who must aspire to do reporting worthy of a Pulitzer Prize, we have to wonder how they let Gelbspan’s “Pulitzer winner” label go unquestioned. Surely, if an ex-editor/reporter gains fame as a Pulitzer winner, we have a giant problem if he never won a Pulitzer, don’t we?

Defenders of Ross Gelbspan will be quick to point out he conceived, directed and edited a series of 1984 Boston Globe articles which resulted in Pulitzer Prizes awarded to the seven reporters who did the reporting – named in the third paragraph at the Pulitzer organization’s web page here. So, he came up with an idea about a series on race relations, he probably pointed the reporters toward the best way to report on it and who to interview, and then he tidied up their writing like any skilled editor is expected to do. Big deal. But why the need for a defensive narrative?

Starting back in 1990, we have the following phrase way down at the bottom of this text capture for Greenpeace Magazine’s “Taking off the Gloves” article about enviro-activism in its Sept/Oct ’90 issue:

Ross Gelbspan, a Pulitzer prize-winning reporter for the Boston Globe, is the author of a forthcoming book on the FBI’s campaign from 1981 to 1985 against groups critical of U.S. policy.

Here’s the back cover of his 1991 “Break-ins, Death Threats and the FBI” book (click image to enlarge), where it plainly says in a dark border box at the bottom, “Ross Gelbspan is a Pulitzer Prize-winning journalist with 30 years experience…”.

On December 9, 1997, [9/18/14 author correction regarding this line-out: See note at end of this blog post] Gelbspan was apparently introduced on ABC News’ Nightline program the following way, as described at a 1997 Media Research Center “Ted Koppel vs. The ‘Flat Earth Society'” page here,

At the bottom of the print copy of Harper’s December 1995 “The Heat is On” article authored by Gelbspan, it says “In 1984, he was a co-recipient of a Pulitzer Prize for public-service reporting.” 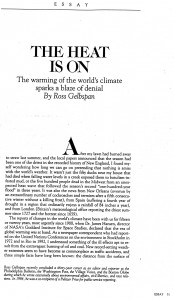 When Gelbspan was invited to address public functions such as meetings held by reinsurance organizations, he apparently offered some sort of information packet about his work which included his 1996-97 bio page saying, “Over the course of his career, he has won a number of awards, including a Pulitzer Prize in 1984“. 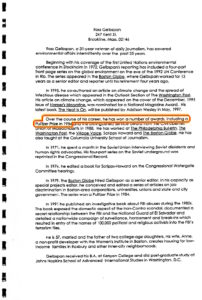 Fenton Communications’ May 20, 1997 press release for his “The Heat is On” book, said this (boldface in original, backup link here),

The stunning contrast between the clear scientific consensus on global warming and confusion in Congress and the media is the result of a systematic campaign by oil and coal companies to stall action, documented by Pulitzer-winning journalist Ross Gelbspan in his new book, The Heat Is On …

Meanwhile, the inside sleeve for the book’s dust jacket says, “In The Heat Is On, Pulitzer Prize-winning journalist Ross Gelbspan exposes…..”

In a review of Gelbspan’s 2004 “Boiling Point” book, The Austin Chronicle not only shows the cover of his book with the words “Winner of the Pulitzer Prize” on it, they also give him hearty accolades for it.

The title – and Gelbspan’s track record as a Pulitzer Prize-winning journalist – pretty much says it all.

You can’t miss Al Gore’s adoration of Gelbpsan in the August 15, 2004 book review he wrote for the New York Times, [Author’s 2/2/17 addition: for non NYT subscribers, Gore’s review can be read in full here. Screencapture here.]

THE blend of passionate advocacy and lucid analysis that Ross Gelbspan brings to this, his second book about global warming, is extremely readable because the author’s voice is so authentic. … For a Pulitzer Prize-winning reporter at the top of his game, this is a career detour requiring courage I greatly admire.

(Weird how the NY Times appended Gore’s article about his Pulitzer ‘mistake’ being an “editing error” [Author’s 2/2/17 addition: screencapture here] when Gore repeats the same thing in his own 2006 movie companion book.)

But an entertaining thing happened with the paperback version of Gebspan’s “Boiling Point” book. The words “Winner of the Pulitzer Prize” disappeared, replaced by “With a new preface by the author“, and his page xxi offers this [3/12/14 author correction regarding this line-out: See note at end of this blog post, it does not help Gelbspan] (the red-highlighting is mine):

Shortly after the publication of The Heat Is On, the fossil fuel lobby mounted an extensive campaign accusing me of résumé fraud. They circulate a message on the Internet and elsewhere that I had falsely claimed to be a co-recipient of a Pulitzer Prize….

He repeats this in a 2006 video interview (backup link here) and the clincher is the exact point I capture in the photo here. 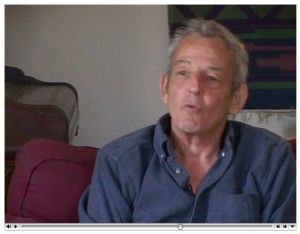 Lo and behold, the response of the fossil fuel lobby was to do a big email and web campaign accusing me of résumé fraud. They said I never w- been a co-recipient of a Pulitzer Prize, which I had been…

Replay the video several times if needed, tell me there is not the briefest pause at this point, where he seems to be forming his mouth to begin saying “w–” before saying “been a co-recipient“.

As in, “never won a Pulitzer Prize”. The distinction is critical.

You see, Steve Milloy is credited with breaking the story of this problem in 1997, where he said,

Based on discussions with staff at the Pulitzer Prize Board, and an Internet search of the past winners of Pulitzer Prizes, it seems that Gelbspan was never awarded a Pulitzer Prize. [try the search he suggested at this newer link* { *9/14/16 Author‘s note: which itself has since been revised here} ]

In August 1997, the Competitive Enterprise Institute noted in its “Cooler Heads Digest” (in the “Gelbspan, Feeling the Heat” section):

The dust cover on his book touts him as a Pulitzer Prize-winning journalist, for his contribution to a series of stories for the Boston Globe in 1984. Gelbspan, though, has never won the Pulitzer Prize. He was just an editor involved with the series…

Responding in a letter, Pulitzer Prize Administrator Seymour Topping of Columbia University confirmed that Gelbspan, having served only as an editor on a prize-winning series of articles penned by seven Boston Globe staff writers, was not entitled to claim the title “Pulitzer-winning journalist” for himself. [Dr Singer’s non-functioning link at that page works here]

And he followed up in no uncertain terms with (bold emphasis is in the original),

This spring, SEPP and its president, Dr. S. Fred Singer, again came under attack–this time in The Heat is On, a book full of specious science and equally specious conspiracy theories by retired Boston Globe journalist Ross Gelbspan. The allegations, at this point, are a bit shopworn, but this time at least the author is interesting.

Mr. Gelbspan, for example, claims to be a “Pulitzer Prize winning journalist.” He is not.

There is no mincing of words here by the ‘fossil fuel lobby’, no dodgy caveat of ‘co-recipient‘, no twists on the manner in which he was associated with seven reporters who actually won the Pulitzer. They said straight out he did not win it. When is a “Pulitzer Winner” not a Pulitzer Winner? Arguably when open-minded people see the individual has every appearance of attempting to justify the incorrect label with minced, dodgy explanations that do not validate it. Attempts to create a “co-recipient” designation only worsen the situation, since the Pulitzer organization offered no such thing in this case.

Skeptic scientists stand as a bulwark against scientifically supportable greenhouse gas regulation, but we are told to ignore everything they say because they are ‘corrupted fossil fuel industry shills who lie about the issue’. And we should trust this accusation since it comes from a Pulitzer Prize-winning journalist…. who never shared his evidence for it with the public and who can’t defend his Pulitzer label.

[3/12/14 author correction: I thought Gelbspan’s paperback preface bit about being a ‘Pulitzer co-recipient’ was an explanation for the disappearance of the outright “Winner of THE PULITZER PRIZE” wording. But my first edition 3rd printing of his hardcover shows his identical nuanced ‘Pulitzer co-recipient’ narrative on its Preface page xiii. So, it turns out he offered not one word to explain why the “Pulitzer winner” label disappeared from the paperback’s front cover, only to reappear on the back instead.

9/18/14 author correction:  I had misread the date for Gelbspan’s Nightline appearance, going off the date seen in the first paragraph of MRC’s piece, rather than the proper date of his appearance in the 3rd paragraph.]