Ross Gelbspan’s tale about circumstances which caused him to look deeper into the ‘industry funding’ of skeptic climate scientists seems praiseworthy, since it could plausibly happen to any objective reporter. But read one of the lesser-known versions of it, and you might react with “Uhhh, hold on there…….”

He repeated the story on multiple occasions, mostly in promotional interviews for his 2004 “Boiling Point” book, such as the following example (bold emphasis mine):

I collaborated with a guy from Harvard Medical School on an article about climate change and the spread of infectious disease. I was thinking, “Gee, this climate change stuff is really heavy. Maybe I should write a book about it.”

After the article ran, I got a bunch of letters from readers who said, “We don’t believe the climate’s changing.” They referred me to the work of several scientists. When I read the work of these “greenhouse skeptics,” I was persuaded climate change was a nonevent, stuck in scientific uncertainty.

But I had set up appointments with several other scientists, and as a courtesy I kept them. They completely turned my head around. They showed me how these skeptics were really misrepresenting the situation by using very selective data, actually using false information in some places. So it got me really upset as a reporter. I didn’t get into this because I love the trees—I sort of tolerate the trees. I got into it because I really believe that in a democracy we need honest information.

I was fortunate enough to find out that these greenhouse skeptics were getting paid sort of under the table by the coal industry.

A 1998 version (5th paragraph,“After this piece appeared in The Washington Post, I received a number of letters and a couple of phone calls”) is not much different than a 2005 Mother Jones magazine interview (9th paragraph here, “After that piece ran, I got letters from readers…”). Al Gore even repeated similar wording (“When he got letters disputing the facts in his very first article, he was at first chastened…”, 8th paragraph) of his review of “Boiling Point” at the NY Times. As recently as a 2011 Boston Globe story, this was simplified in its 11th paragraph regarding his WashPo co-author Paul Epstein, “Letters the pair received prompted Gelbspan to examine the background of global warming skeptics“. Numerous other variants omit the part about the letter-writers.

Gelbspan mentions the letters on page 35 of his 1997 “The Heat is On” book. But he added a significant detail about those letters in his 2004 “Boiling Point” book (bold emphasis mine): 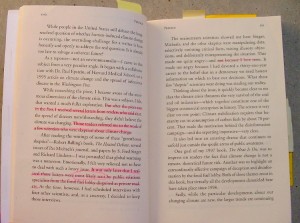 It was only later that I realized those letters were most likely sent by public relations specialists from the fossil fuel lobby disguised as private readers.

His position about the source of the letters appears to turn from speculation to outright assertion in a September 22, 2004 interview (13th-16th paragraphs)

He wrote a piece about climate change and its link to infectious diseases for The Washington Post. After it ran, he received several letters from readers saying they did not agree the climate was changing.  ….

He later discovered the public relations departments of the fossil fuel lobby pretending to be concerned citizens had written the letters.

Gelbspan backs what the interviewer said (in the only other piece I’ve found so far about the letters’ source), at his web site’s reproduction of his May 5, 2010 talk** (3rd & 7th paragraphs): [**12/4/13 Author’s note: Well, you can still click on that link, but the “3rd paragraph” I quote immediately below isn’t there anymore. It still is seen here, and details about this disappearance is seen at my 12/4/13 blog here. 10/9/14 Author’s note: There’s always more. As of this date, the paragraph quote in parentheses below is missing from his current page. More on that in my 10/9/14 blog post.]

…after the piece ran in the Post, I received several letters from readers who said that, the disease information notwithstanding, they didn’t believe the climate was changing and they referred me to the work of a few scientists.   ….

(Coincidentally, I learned later that the letters I’d received after that Washington Post piece were part of a coordinated campaign – and not responses from ordinary readers.)

Yet, fossil fuel industry “public relations departments” – plural – felt a need to very quickly undertake “coordinated” efforts to specifically deflate his new concern, especially because real letter-writers and phone callers knowing about skeptic climate scientists were nowhere to be seen. What happens to his narrative if Boston Globe reporter Scott Allen, writing an article just two weeks earlier about Epstein, global warming and the worldwide resurgence of infectious diseases, was not hit with the same fake letter campaign?

The Gelbspan/Epstein article must have appeared influential enough that a few book authors and article writers mentioned it directly. None link to it or reproduce it, however, including Gelbspan. One archive article search site can’t find it, but it apparently does show a resulting letter-to-the-editor which expressed a concern about what the article missed.

Of the multitudes of archive articles available for viewing through a simple purchase at The Washington Post‘s own archive collection site, Gelbspan’s & Epstein’s “Should We Fear a Global Plague? Yes—Disease Is the Deadliest Threat of Rising Temperatures” is not one of them.