Regarding this particular January 9, 2018 *,[3/13/18 Author’s edit: that link now doesn’t function, but the archive of it does] I will say I am mildly surprised on how tame it is compared to others regarding citations of evidence which supposedly prove skeptic climate scientists and organizations associated with them are paid fossil fuel industry money to lie to the public. But when it concerns this lawsuit’s ties to the same old people surrounding that accusation, what’s found within this lawsuit is no surprise at all.

Allow me to first clarify, for the benefit of new readers arriving at my blog, what my position is here: contrary to what others say about me, I spend very little time on scientific assertions on the global warming issue within this blog or in my online articles, I clearly leave that to the science experts. What I do is point out myriad problems in narratives about the ‘industry-corrupted skeptic climate scientists’ accusation, and the close associations of the small clique of people surrounding that accusation.

The surprise to me with this lawsuit is that it doesn’t feature sensational evidence like others did — the older Kivalina v Exxon case and the newer San Mateo / Marin / Imperial Beach v. Chevron cases — by citing the infamous ‘leaked memo set’ headlined with “reposition global warming as theory rather than fact,” which are universally accepted among enviro-activists as smoking gun evidence of skeptic climate scientists being paid to push misinformation to the public at the behest of sinister corporate handlers. Instead, the lawsuit lamely offers a quote from the American Petroleum Institute’s “Global Climate Science Communications Plan” as evidence of that. Others offered the same. As I’ve said at this blog before, this “evidence” is little more than a truism. Certainly nobody would accuse enviro-activists of conducting a sinister plot if that very same quote in the lawsuit had two additional words, and the letters “un” removed from “uncertainties”:

1) It asserts that the science behind the idea of catastrophic man-caused global warming is settled.

FOSSIL FUELS ARE THE PRIMARY CAUSE OF CLIMATE CHANGE

Skeptic climate scientists dispute this. I’ll leave it to scientists or expert speakers such as Steve Goreham to explain the science pronouncements within this lawsuit.

2) It all but yells, “by God, Exxon knew” the science was settled early on.

DEFENDANTS HAD FULL KNOWLEDGE THAT FOSSIL FUELS WOULD CAUSE CATASTROPHIC HARM

Despite the fact that it is rather easy to find Exxon documents straight out of the “ExxonKnew” exposé from Inside Climate News that Exxon people were doubting what was being predicted in climate models of future events. I’ll leave it to others to find more such examples. Some already have done so – video version here.

and, 3) Exxon misled the public with liars-for-hire ‘shill experts.’

This is where I come in – I have a bit of a head start in this area, but of course, I welcome anyone to compare all of the collective global warming lawsuits to see what connections arise among them, and how those are associated with broader efforts of particular enviro-activists who try to impugn the character of skeptic climate scientists.

One entertaining small item in this City of New York v. BP lawsuit is its citation of one of the ‘dossiers’ created by the Union of Concerned Scientists (UCS) regarding what is arguably not a particularly damaging quote. Why not cite the UCS’ far more damaging dossier headliner? Is it because such a citation might inadvertently focus attention on where UCS got that headline from?

Another connection item is how this lawsuit mentions book author / documentary movie star Naomi Oreskes, and does so in mildly ironic fashion by noting her ‘survey of Exxon documents’ (others dispute it heavily). Oreskes first gained fame in the global warming issue with her ‘survey of papers’ supposedly proving a scientific consensus for man-caused global warming – which was also heavily disputed. But Al Gore used it anyway in his 2006 movie, immediately before he compared the leaked tobacco industry memo “Doubt is our Product” to a supposedly leaked fossil fuel industry memo, “Reposition global warming as theory rather than fact.” Gore also name-dropped Oreskes’ name when he appeared with New York state attorney general Eric Schneiderman in Scheneiderman’s 2016 announcement about prosecuting Exxon, with regard to the political angle about fossil fuel tactics being similar to tobacco industry misinformation tactics. Oreskes has done the same herself, using that identical “reposition global warming” phrase. And Oreskes also pops up in the trio of San Mateo / Marin / Imperial Beach v. Chevron cases ironically again in connection with a survey, and the details surrounding her quotation there potentially inadvertently open a window into the origins of the smear of skeptic climate scientists, as I detailed here. Lest anyone forget, it’s been suggested that Oreskes’ 2012 workshop gathering in La Jolla, California (notice who’s “not pictured” there – hold that thought) was the catalyst which prompted the latest efforts to prosecute Exxon.

One more connection is the American Petroleum Institute. This City of New York v. BP lawsuit mentions API in some way 25 times. As in …

Defendants sponsored publicity campaigns using front groups and paid “scientific” mouthpieces — including some of the same scientists that the tobacco industry had used to downplay the risks of cigarettes — to discredit the mainstream scientific consensus on global warming and downplay the risks of climate change. ….. conducted either directly or through surrogates like their main U.S. trade association, the American Petroleum Institute (“API”)…

Where else was API seen? Try the The Comer v. Murphy Oil lawsuit and who it says the following statement is attributed to.

The API [American Petroleum Institute] and other Oil Company Defendants have engaged in concerted financial activity far in excess of $1 million in furtherance of a tortious civil conspiracy to “reposition global warming as theory rather than fact.”

Then we have this connection (click image to enlarge). 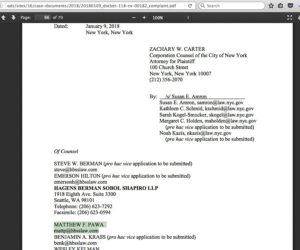 Matt Pawa — he of the “not pictured” label for the participant photo of people at Naomi Oreskes’ 2012 ‘let’s-nail-fossil-fuels-companies’ workshop — is one of the key Hagens Berman lawyers in this case. The same label he has in the twin State of California v. BP cases, the ones with the connection problems I detailed here. The same Matt Pawa who was a key lawyer in the Kivalina v Exxon case, where the old US News & World Report magazine report about it couldn’t miss what the goal of the case was supposed to reveal. Nor can you miss what the thrust was in a 2010 New York Times report about the Kivalina case. Odd how Pawa’s current lawyer bosses praise his prior work on the Kivalina case …. but within his own profile page there, the case is seemingly not all that notable. The old “Solve Climate News” site seemed to think this case and Pawa were both significant. That’s the site which was renamed “Inside Climate News” … which has “ExxonKnew” documents that are multi-cited in Pawa’s current City of New York v. BP case.

And as I detailed in the “Matt Pawa” section of my February 10, 2015 blog post, that latter bit in the 2010 NYT article regarding tobacco / climate court cases is reflected in a piece that Pawa kept at his old law office website, with a concluding quote from a board member at the old Ozone Action environmentalist group.

Remember, this is also the same Matt Pawa whose Kivalina v Exxon case not only cited the set of ‘leaked memos’leaked memos that made Ross Gelbspan famous, Pawa’s Kivalina case cited Gelbspan directly for other ‘evidence.’ And there’s an entire mouse-maze of paths to follow on what’s wrong with that situation. Where does it end? Not well. 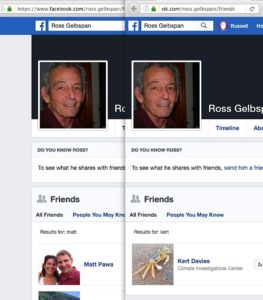 One last connection: When I first heard the news of this new City of New York v. BP court case, I did a basic internet search for its title. Who did I see as just the second entity announcing the news of this event? Kert Davies’ Climate Liability News ‘service’, the place I dissected here with regard to its connections to these lawsuit actions. The ironic connection is that the news source hours ahead of CLN was US News & World Report – the place citing the “reposition global warming” memo found within Matt Pawa’s 2008 Kivalina case.

To their discredit, Exxon still seems to cave into the politically correct position of wanting to ‘fix’ man-caused global warming. To their credit, they are hitting back against these lawsuits, but they seem to be limiting themselves to criticism of “liberal state attorneys general and other officials” behind these lawsuits. The “state attorneys general and other officials” aren’t making up their material out of thin air, they are getting it from particular sources, and those sources have every appearance of working together on these matters right up to days-old situations surrounding these lawsuit filings. If I may humbly suggest it, that is where the entire global warming issue falls apart.

All of these things are interconnected to the core clique of people who first gave the ‘crooked skeptic scientists’ accusation its media traction way back in the mid 1990s, and that accusation has been worthless from its inception.