Enviro-activists love to say greedy fossil fuel industry executives hired lying shill scientists to misinform the public away from believing the settled science of catastrophic man-caused global warming. Yet the only thing which remotely looks like evidence to confirm this conspiracy is a worthless set of memos supposedly leaked out of the Western Fuels Association having the strategy to “reposition global warming as theory rather than fact.” That’s all the enviro-activists have. The impression I get from digging through all of this accusation is that we actually have the exact opposition situation …..…..enviro-activists who could see their beloved issue dying at the hands of skeptic scientists’ detailed climate assessments if nothing was done to stop them. I suggested in my August 15, 2017 post that Newsweek reporter Sharon Begley put out a rather loud call in late 1993 about the necessity to stop the skeptics. In today’s post, I suggest the late Dr Stephen Schneider provided the recipe in mid 1996 on exactly how this could be done — question their associations, suggest they don’t deserve fair media balance because of that, and emphasize the settled consensus about global warming.

He said as much in part of his a presentation at the Aspen Global Climate Institute, July 31 to August 8, 1996 (full online non-PDF text here, PDF version here, pages 99-100):

On the role of scientists in popularization/advocacy of scientific issues, Schneider says the context is that:

… b. The media love a fight and often set up stories as “dueling scientists.”

c. The public, media and politicians misread normal scientific contention as a lack of consensus, which leads to confusion and policy gridlock….

Skepticism is appropriate but some opposition is pathological and may take the form of:

… 3. Special Interests These ideological opposites/hired guns will try to discredit the science (usually proclaiming to be defending sanctity of science), or discredit the scientist (redefine terms of debate from the science to the scientist or the assessment process, find a trivial error and expand, etc.). They count on the public and media not to check up on the credibility of their attacks, i.e., they exploit the media’s “balance” doctrine.

“Hired guns”? Where on Earth would Dr Schneider have gotten that idea? Of course he couldn’t have gotten it from Ross Gelbspan’s 2004 “Boiling Point” book; it wasn’t published during the time of his Aspen Global Change Institute presentation. However, for illustration purposes, here’s a quote from Gelbspan’s book:

No one is more aware of that fact than the top executives of the oil and coal industries and their hired guns, a tiny handful of industry-funded “greenhouse skeptics,” most of whom are laughingstocks in the scientific community.

And Dr Schneider couldn’t have gotten his “hired guns” idea from Gelbspan’s 1997 “The Heat is On” book; it wasn’t published at that time, either. It’s also unlikely that he would have heard Gelbspan’s radio interview just one day before the end of the Aspen Global Change Institute conference, but it’s fun to quote from that one, too (MP3 audio, place the slider at the 50:11 point here):

In 1991, the large coal operation called Western Fuels was very candid in its annual report, and it said it was going to attack mainstream science, it hired three so called greenhouse skeptics, scientists who didn’t believe that this was happening, and they mounted a number of public relations campaigns, one in particular is quite interesting, this was a program that called for interviews by these three scientists, radio, newspaper, and TV interviews, in a campaign, and the strategy papers for the campaign said it was designed to quote “reposition global warming as theory rather than fact” ….

What was available for Dr Schneider prior to his conference having that kind of language? Would he have read the Buffalo News editorial opinion from December 16, 1995?

A SCIENTIFIC statement that recently came out of Madrid should put to rest any doubts about global warming and the human role in it.

Through the years, skeptics — some of them hired guns for the coal and oil industries — have managed to cast uncertainty over the warnings of scientists about the warming trend and its causes.

Maybe some other editorial opinion might have said something like that, but what popular source would they have relied on? How about Harper’s Magazine circa December 1995 and its “The Heat is On” article by Ross Gelbspan, which had the following?

For the most part the industry has relied on a small band of skeptics—Dr. Richard S. Lindzen, Dr. Pat Michaels, Dr. Robert Balling, Dr. Sherwood Idso, and Dr. S. Fred Singer, among others—who have proven extraordinarily adept at draining the issue of all sense of crisis. Through their frequent pronouncements in the press and on radio and television, they have helped to create the illusion that the question is hopelessly mired in unknowns. …

Three of the skeptics—Lindzen, Michaels, and Balling—were hired as expert witnesses to testify on behalf of Western Fuels Association, a $400 million consortium of coal suppliers and coal-fired utilities.

Of course, Dr Schneider might have gotten that basic idea directly from Gelbspan himself. After all, he did refer straight to Gelbspan’s Harper’s article in his his 1996 “Laboratory Earth” book. Incorrectly as a Pulitzer winner, as well.

Have a look again at what Dr Schneider was setting up back in the summer of 1996, essentially at the beginning of the time when the ‘industry-corrupted skeptic climate scientists’ accusation was getting its first major media traction (click image to enlarge): 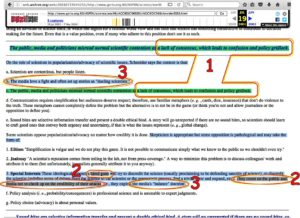 Put more simply, “You reporters will look like fools if you fall into the trap of giving fair balance to people – check who they associate with – who are paid to lie about what is a finished debate.” In the simplest way of explaining it all, “the science is settled” / “skeptic climate scientists are evil industry shills” / “there is no need for journalists to give fair media balance to those skeptic scientists, because of the prior two points.”

When I suggest we have a polar opposite situation here, enviro-activists appearing to be doing all the racketeering to keep their cause alive in the face of withering science-based criticism, this sort of thing is what I’m talking about — Newsweek‘s Sharon Begley practically yelling about the need to stop skeptic climate scientists in their tracks, and less than three years later, Dr Schneider telling policy analysts and media experts at a major symposium exactly how such critics can be marginalized. What ties this together? Both Begley and Dr Schneider weren’t vague in the least on repeating Ross Gelbspan’s favorite leaked memo phrase in their efforts to portray skeptic climate scientists as crooks.

But as I noted in my September 18, 2014 post, there’s always something more. In that post, I noted how Dr Schneider offered one slightly more subtle variation of Gelbspan’s favorite phrase in 2009 – “Journalist Ross Gelbspan wrote a book called The Heat is On … Citing leaked internal GCC documents, he reported that their plan was to ‘reposition’ the debate as ‘theory, not fact’” – and on another occasion a year earlier offered one quite a bit more subtle – “a coalition of liars and spin doctors to reposition the debate onto the issue of uncertainty, way beyond [what] the scientific community agreed with.” But did you catch what he said “hired guns” did in his 1996 Aspen presentation above? They ….

Repostion … debate of global warming … from being accepted fact-based science … back to its assessment process – a.k.a. “theory.”

Reposition global warming as theory rather than fact.

That’s the leaked memo phrase that enviro-activists put all their faith in right now and all the way back to 1991 as smoking gun evidence for the accusation that Big Coal & Oil hired lying shill scientists misinform the public away from believing the settled science of catastrophic man-caused global warming. The accusation started out poorly, but all it needed to gain traction was some fine tuning, and a plausible-sounding introduction about a Pulitzer-winning investigative reporter exposing this sinister plot. And to remain alive, the accusation counts on nobody questioning anything about it.