When I say there is only one source for the idea that a fossil fuel industry conspiracy exists where skeptic climate scientists are instructed and paid to lie to the public about the settled science of catastrophic man-caused global warming, I’m not exaggerating in any way. Today, I offer a one-two punch: first, part of a presentation at The 2015 Conference on Communication and Environment in Boulder where I will highlight a particular line with red letters which inadvertently proves my point, made by a “doctor of Rhetoric and Composition.” Then, a days-old video I was alerted to which features not only a couple of the usual suspects whose efforts to smear skeptic climate scientists date from nearly a decade / nearly two decades back, but also a line seen within the video dating from the 1991 origins of the smear.

From Lauren E. Cagle’s “Shades of Denialism” seen no farther than page one of her nine page paper,

Journalists and scholars have been writing about the phenomenon of climate denialism since the late 1990s, and particularly about efforts to cultivate denialism. Ross Gelbspan‘s 1997 ‘The Heat Is On’ and 2004 ‘Boiling Point’ are landmark investigations of the industry – funded campaign to manufacture controversy over climate change. James Hoggan brought this controversy online with the DeSmogBlog in 2005, and followed with the 2009 book, Climate Cover Up. More academic books such as Oreskes and Conway’s Merchants of Doubt have documented the strategic manufacture of the controversy. …. In the most comprehensive overview of what they call the “denial machine” McCright and Dunlap identify the same list the [sic] actors and institutions who generate the “echo chamber” of denialism.

The reason why McCright and Dunlap identify the same list [of] actors and institutions is because they have no independently corroborated source for it.

One more thing here: On page 3 of this person’s paper at The 2015 Conference on Communication and Environment in Boulder, she has the following:

Non – experts like the many journalists and scholars who have documented the denialism machine or the controversy such as Naomi Klein or Naomi Orestes expose the villains and advocate powerfully for radical change. Meanwhile, scientists who are hired guns or goons of the machine are “contrarians” who sell their scientific credentials in the service of the fossil fuel industry.

Hired guns? That phrase was what my previous blog post was all about.

Now, to pile on. A ‘journalist’ at The Real News Network (TRNN), who I suggested last year reports only half of the real news, put a piece titled “Trump, The Koch Brothers and Their War on Climate Science” online just last week, 9/14/17.** The video essentially suggests denial about catastrophic man-caused global warming is bankrolled and orchestrated by fossil fuel industry interests.

Which non-reporter people does it rely on for sources about this accusation? Naomi Oreskes, and Kert Davies, yet another person separated only one degree from Ross Gelbspan. Oreskes’ accusations against skeptic climate scientists dates back to the time of her 2010 “My Facts are Better than Your Facts” book chapter; Kert Davies’ efforts go back a little over a decade earlier, at an organization which centered its accusations around the “reposition global warming” memo set. But the most amusing bit of old stuff in the video is the ever-so-brief appearance of a fragment word phrase dating from 1991. Screencapture of it below, as it slides downward in the lower left corner at the video’s 12:09 mark, while Davies says “It’s a network of corporations and think tanks, front groups.“: 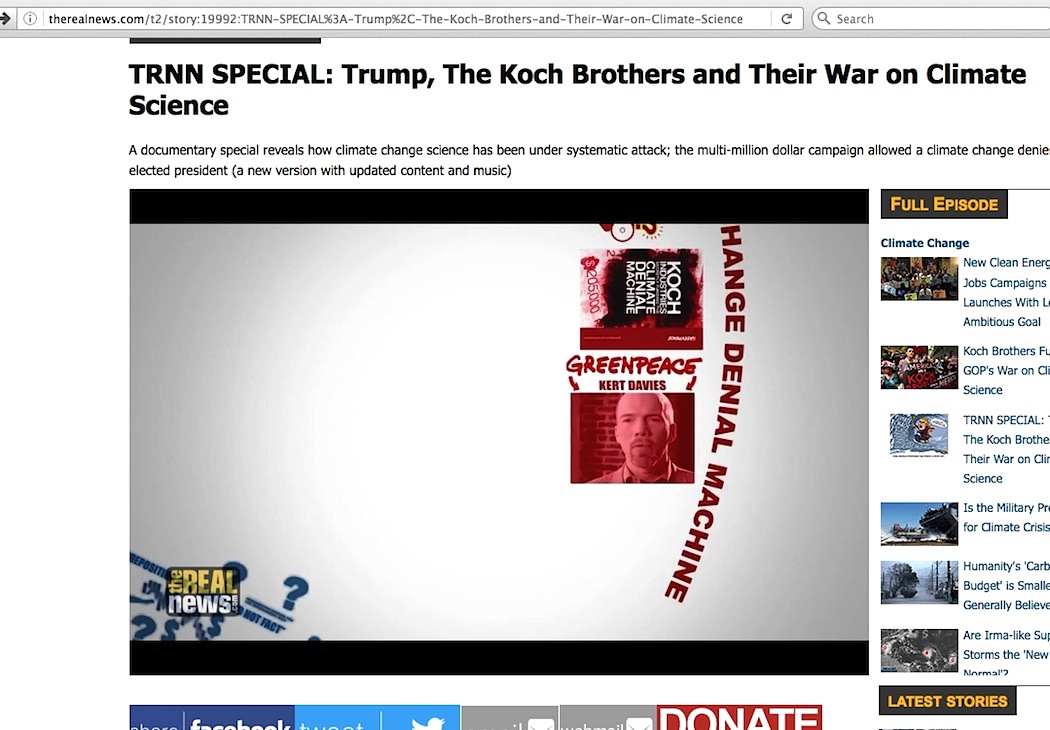 “REPOSITION AS A THEORY AND NOT FACT”  (in the original Greenpeace video, the narrator at least doesn’t leave out the words “global warming”)

In a lame effort to fill out the TRNN video with other material which looked like fossil fuel industry orchestrating things, a line from the American Petroleum Institute’s 1998 leaked “Global Climate Science Communications Team” memo was highlighted, while the narrator read it: “Victory will be achieved when average citizens understand uncertainties in climate science.” That isn’t a sinister industry directive, it is a basic truism. Greenpeace itself would declare the same victory regarding their version of the certainties in climate science, but nobody in their right mind would suggest that is stand-alone evidence proving they commissioned people like the Vice Chair of the IPCC to lie to the public.

So, once again, it is ever more obvious that the collective lot of enviro-activists have only one source for their unsupportable accusation about a fossil fuel industry denial mating, the worthless set of ‘reposition global warming” memos, and the one guy responsible for gaining media traction for them, Ross Gelbspan.

————————————————————————
*(this 9/14/17 TRNN video is actually a rehash of the version put out in November 2016, dated as such here – you can read the current version’s transcript of narrator / American actor Danny Glover’s words while simultaneously listening to British actress Emma Thompson speak them here.)
*[Author’s 1/7/19 addition: The article link changed to this one with the video intact, and since the immediately-above link to the older Emma Thompson narration doesn’t function properly, I substitute this direct-to-Youtube video link instead, and add that Thompson’s narration matches Glover’s newer narration transcript starting at the 3:12 point.]