The title of today’s blog is a paraphrase of the famous quote out of the 1938 film, The Wizard of Oz. Watch the global warming issue zooming by in a superficial manner and all the horrific claims – increasingly extreme weather events, imperiled polar bear populations, skeptics who are paid to lie about the truth of all of this – sound like they are true. But turn any variety of those claims sideways by examining them carefully, and an edge digs in, and it soon becomes apparent that the number of disingenuous situations in the global warming issue is breathtaking. Today, a wipeout from an older version of Ross Gelbspan’s own website that’ll make anyone cringe.

It’s a wipeout I caught when I was assembling my August 31, 2016 post, part of which showed what the February 7, 2002 version (screencapture here) of Gelbspan’s website looked like. Notice at the left side of the page, there is a clickable “About the Author . . .” link which takes you to this page dating from a few months earlier, which has the following accolades about him and his “The Heat is On” book (click on the image below and the following ones to enlarge):

As special projects editor of The Boston Globe, he conceived, directed and edited a series of articles that won a Pulitzer Prize in 1984. 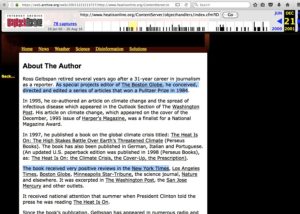 Go back to the main page and you see a short blurb from that New York Times review in the right hand column.

No other reporter has told this story as comprehensively or explored the implications for human welfare as searchingly as Gelbspan. 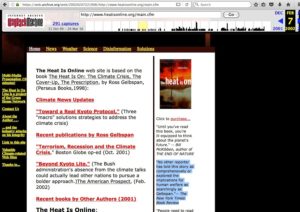 But watch what happens when you read what is actually at the NYT review:

No other reporter has told this story as comprehensively or explored its implications for human welfare as searchingly as Gelbspan, a Pulitzer Prize-winning journalist.

But this isn’t the only situation where Gelbspan’s “Pulitzer winner” designation appears and then disappears. On the front inner dust jacket sleeve of Gelbspan’s 1997 “The Heat is On” hardcover book, it clearly says “Pulitzer Prize-winning journalist Ross Gelbspan exposes…..” The 1998 paperback version’s back cover expands on the NYT review, where three dots are a standard editorial indication of gaps in text – specifically this gap. No three dots for the missing “a Pulitzer Prize-winning journalist“, though. 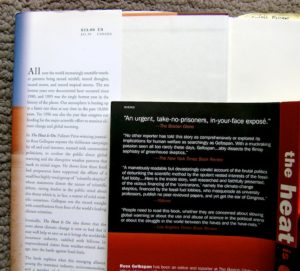 No chance of the NYT review causing any questions to arise at Gelbspan’s current website, it disappeared from there completely in late Spring 2008.

Pay no attention to those words behind the curtain, because if you do, you’ll forget all about Gelbspan’s cataclysmic climate narratives and instead wonder why he apparently felt compelled to chop those words out of his version of NYT‘s review, and after you find out just how deep this problem is, you’ll start to wonder what other labels for him don’t actually apply, and whether there are more things he says which doesn’t add up right. You may start to wonder if assertions about the global warming issue itself start to fall apart, and then perhaps whether the science pronouncements overall from the Al Gore / IPCC side of the collective issue are on solid ground in the face of criticism from scientists who aren’t convinced about the certainty of catastrophic man-caused global warming.