In my December 31, 2014 post, I hinted at how an utterly casual drop-in of Ross Gelbspan’s central bit of evidence indicting skeptic climate scientists of industry corruption ends up looking like a pre-scripted propaganda tactic. In my just-prior post, I hinted at how fluff pieces which only casually dropped his name and book title arguably take on the same appearance. Today, from my mega-pile of notes on the overall smear of skeptic climate scientists and anybody connected to the effort, a situation involving a seemingly casual mention of Ross Gelbspan instead makes better-informed readers go “hmmmmm.”

Read the first two paragraphs of the New York Times Magazine’s March 3, 2002 The Way We Live Now article “Ominous Clouds” and it initially looks like a run-of-the-mill retrospective piece on The Weather Channel. Then its third paragraph seems to imply we can begin to see some kind of ominous pattern from this cumulative experience, with its money quote being, “After a few years of big storms, bizarrely warm winters and drought warnings, we no longer want nice weather. We just want normal weather.”

Is the article author an expert on the history of weather, enabling him to imply with authority that the weather patterns were changing? Hardly. He was and is a writer of material having nothing to do with the climate.

His article’s fifth paragraph is where the real problem appears. Watch who he cites after an assertion about people being increasingly concerned about worldwide weather events:

… the Weather Channel’s marketing people have noticed an intriguing phenomenon. People are watching their programs for longer than anyone ever expected — eight minutes was the original projection, but one in four now watch for 20 minutes or more at a time. People come for their own weather, but they stay for their neighbor’s weather and finally for the weather around the world. No low in Asia is too obscure for them; no hiccup in the jet stream over Australia is too far removed. The phenomenon seems widespread in the weather industry. “People are unsettled,” says Ross Gelbspan, founder of Heatisonline.org, who has noticed a large increase in visitors to his site recently. “It’s the freakish weather we’ve been having.”

The remainder of the article dives deeper into ‘irrefutable facts’ pointing to a warmer climate and a bleak future. Increased visitors at Heatisonline.org? Golly, that indicates something important to look at, let’s see what it says. (Click image to enlarge, full text to February 2002 version here) 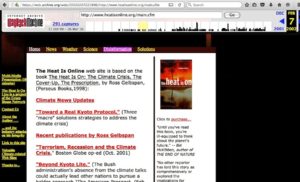 … the fossil fuel lobby and its ideological supporters have waged a relentless campaign of deception and disinformation to confuse people about the reality of warming-driven climate change.

See how well this works? “Settled science” / “corrupt skeptics.” And by default, everyone may ignore skeptics because of those two points. Just don’t question anything about that.

Ask what actual evidence Gelbspan has ever offered proving the existence of any such ‘deception and disinformation’ campaign, and you soon see how his core evidence is not what he says it is, and how his narratives about discovering it break down. From that, the average reader might start to wonder if assertions about unprecedented weather fall apart, and if the same thing happens to assertions about ‘time spent by viewers watching The Weather Channel’ back in 2002, and if Gelbspan’s own website traffic was actually increasing back then.

Perhaps the change in viewer length of The Weather Channel can be explained away via its reports becoming longer and less repetitive, but the history of major weather events cannot be erased, nor can myriad problems with Gelbspan’s own narratives. Given how cancerous doubt creeps into anything associated with Ross Gelbspan, the mention of his name in the above NYT article doesn’t look casual, it looks like an effort to steer readers into a non-science website that’s not subtle about its true focus, in order to bolster an article which seems to have the intent of planting the idea about man-caused global warming causing extreme weather events.