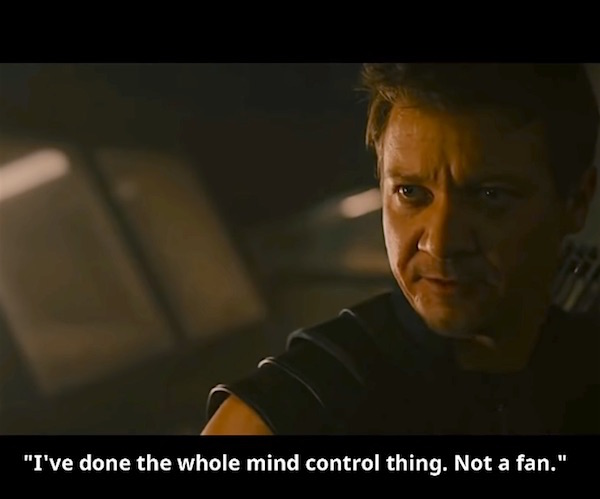 When prominent people tell and retell the details of what led them to heroically fight the forces of evil, we’re dazzled every time. It’s inspirational. I’ve suggested this before; when audience members spot significant changes in the details, they wonder about that, particularly when more details start to unravel. A once praiseworthy story suddenly begins to look more like it’s filled with lines designed as mind control, in support of a larger and rather suspect agenda to spread self-serving propaganda.

When it comes to the overall tales of heroism from the folks on the Al Gore political side of the global warming issue, I’ll paraphrase from a famous Avengers movie line:

I’ve seen the inconsistent narratives. Not a fan.

Time to expand on one of those problems that I only briefly touched on before. But first, a quick review of the other inconsistent ‘hero’ narratives I’ve run across.

That now brings us to John Passacantando’s and others’ accounts of when Ozone Action began its operations. As expected, nice tidy answers to questions don’t appear, this kind of examination only leads to more and more questions about the overall narratives. For example, we see the following in a September 2003 interview (PDF pg 29 here) done by his alma mater’s magazine,

In 1993, he would take the leap that eventually led him to Greenpeace, by co-founding and then quickly building Ozone Action—a successful environmental public interest group that managed to bring considerable attention to the problem of ozone depletion.”

Right. When in 1993? Who was his co-founder? Didn’t that person share equally in the ‘quick building’ of Ozone Action, while deserving equal accolades for ‘bringing considerable attention to the ozone depletion issue‘?

The August 7, 2000 New York Times article describing the then-pending Ozone Action / Greenpeace merger answers the first two: Ex-Greeenpeacer Karen Lohr; July 1993. A 2006 online Washington Post Q&A session with Passacantando at least confirms the year, not the month, and says nothing about Ozone Action having any kind of co-founder. However, the long offline Ozone Action organization pages (saved in the Internet Archive system) corroborates both the July 1993 date and that Lohr was a co-founder (although she disappeared from those pages sometime after June 1998 while also not being readily found in its pages prior to February 1998).

In both that August 7, 2000 NYT article and the 1998 archived Ozone Action pages, that’s all they say about Karen Lohr. She was a co-founder. No praise, no heroic or even basic details, nothing more. Hold that thought for a while.

Meanwhile, within the official Greenpeace announcement of Passacantando’s departure from Greenpeace in 2008, we see this:

Passacantando in 1992 co-founded Ozone Action, which organized some of the first scientists, mayors, coastal residents, students, business leaders and presidential candidates to speak out against climate change.

Ok. Then when specifically in 1992? And why is there no mention of Karen Lohr equally sharing in organizing prominent people to speak out against climate change, or any mention of the concerns about ozone depletion?

This is not an isolated inconsistency problem.

If all of that that looks comical, have a look at how the SourceWatch website page for Passacantando, pins his co-founding of Ozone Action at both 1992 and 1993 within paragraphs of each other. Their link his co-founder goes to a blank page. Karen-who?

When objective, unbiased examiners see that sort of thing going on, along with an awareness of how problematic the personal stories are from Ross Gelbspan, Naomi Oreskes, and Al Gore on how they ‘discovered industry-corrupted skeptic climate scientists,’ now the question becomes rather elemental regarding the claim that John Passacantando co-founded / founded / started the Ozone Action organization.

Are we even certain about that statement?

Remember what I said about holding the thought on Karen Lohr’s involvement with Ozone Action? While utilizing the free trial period offered by the Newspapers.com site to either corroborate or dispute accusations (including Ozone Action’s) about specific newspaper ads within an alleged ‘disinformation campaign,’ I also searched for as much as could be found regarding whether she was described anywhere as a co-founder of Ozone Action. Problems seem to arise there.

She was a prominent environmental leader prior to 1992. Here she is photographed in a major July 1, 1991 Canada Financial Post article, as a top representative of the Sierra Club’s efforts to stop a huge Quebec hydroelectric project. 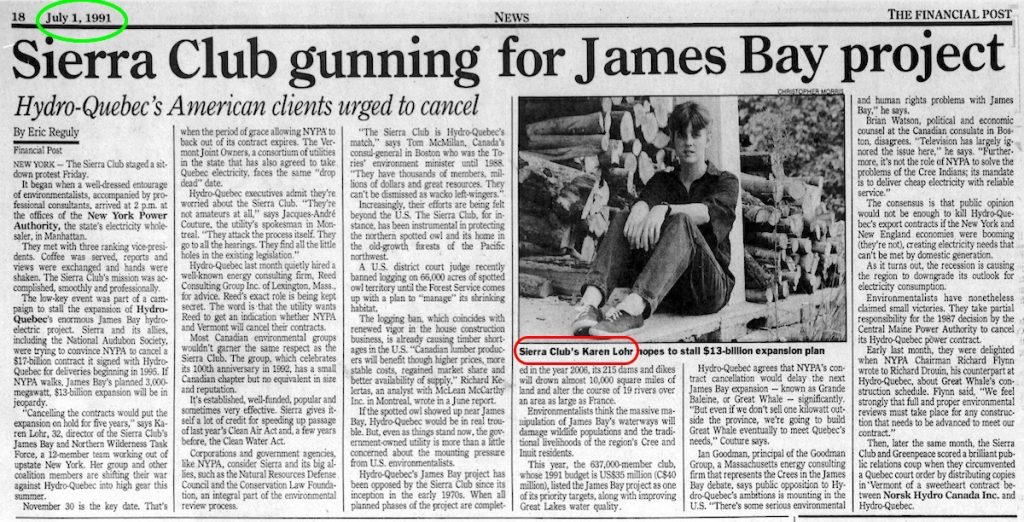 It was big news at the time, she was prominently quoted in an August 1991 Washington Post article about this protest (overseen by the Sierra Club), along with a similar appearance in WashPo in October 1990.

The hydroelectric project was halted in 1994. But prior to achieving that goal, Karen Lohr had already moved on from the Sierra Club to Greenpeace by early February 1992 as their ozone depletion awareness project director. What prompted that move? Good question, there’s a lack or readily found internet details about it from that far back. Whatever the reason, she apparently put the same amount of passion or more into it. The Quebec hydroelectric project was wrecking huge areas of Canada. According to an April 14, 1992 Delaware News Journal article, the DuPont company was wrecking the planet. 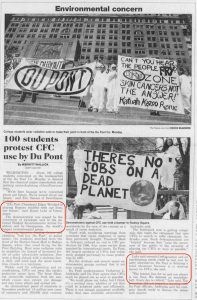 “Du Pont Chairman Edgar Woolard is playing Russian roulette with our lives, our future,” said Karen Lohr of Greenpeace. The demonstration was staged by the University of Delaware unit of the national Student Environmental Action Coalition and by Greenpeace, the world’s largest environmental group.

… Lohr said essential refrigeration and air conditioning needs could be met now by safer alternatives. Du Pont is delaying a total phaseout because it is making money on CFCs, she said. “The bottom line for us and our planet is our lives. We demand an immediate halt. Every day is critical,” Lohr said.

Lohr, as the Director* of Greenpeace’s Atmosphere & Energy Campaign described Du Pont’s manufacturing as “an example of corporate criminality” in the University of Delaware newspaper the following day. *(Steve Kretzman claims the same title in the same time period. Where’ve we seen his name recently?)

Having successfully saved the whales, Greenpeace was going to save the planet from a depleted ozone layer, with Karen Rohr clearly leading the way.

Or not. A December 21, 1992 announcement in the Earth First! Journal (PDF pg 37) states in connection with a music event that Ozone Action sponsored, “Karen Lohr of North Carolina will be coordinating the ozone campaign.” “Lohr of North Carolina,” not Lohr of Greenpeace.

Meanwhile, here’s what the “Ozone Action” organization timeline looks like after December 1992, from what I’ve found so far:

When was Ozone Action started? Who exactly started it? That may be finally resolved via official North Carolina and/or Virginia state records for non-profit groups. Will we also learn who was hired as an administrative assistant in August 1993?

Karen Rohr apparently dropped totally out of sight, period. Full stop. No more dramatic final curtain calls for blind polar bears after 1993. Did she die back then? No, she is very much alive, and can be found, but I assume she wishes to avoid unwanted attention, so I won’t offer more details.

See the big appearance problem here? When prominent people accumulate an adoring fan base as ‘warriors holding corporations accountable for environmental injustices,’ the evidence for the injustice had better be ironclad, along with the narratives about what exactly led these people to become ‘warriors.’ The more inconsistent those narratives are, the less they look like heroic paths toward destiny, and the more they look like deceptive, con artist-style mind control tricks concocted to help these ‘warriors’ to gain trust and money on their way toward the top, and later to protect their legacies.

Nobody is a fan of that.