Just askin,’ yet another in my series of posts asking questions that not only the inquisitive public and unbiased reporters should be asking, but also the law firms working for the defendant energy companies in the current 25 “Exxon Knew”-style global warming damages/cost recovery lawsuits, along with unbiased, objectives members of the US House Oversight Committee. You’ll never how weak and indefensible that situation is until you know what and who led to the current situation.

Kalee-who? You’ll be glad you asked. I covered her problems back in September 2013, but there’s always more to cover, especially when it is relevant to current-day situations and questions that should be asked in courtroom settings and congressional hearings.

Back in the summer of 1996, the now long-forgotten (and loooong gone from the internet) Ozone Action environmentalist group was rapidly becoming famous as a go-to source for global warming issue activism pushback against the ‘corporate destroyers of the planet’, while the mighty Greenpeace organization was hemorrhaging membership, donations, and relevance. Why would its Communications Director, in a position critically responsible for the rising success and smooth sailing of the place where she works, suddenly and seemingly inexplicably jump ship onto one described already a year earlier as “sailing rough seas”? Why jump ship to one that looks like a sinking ship besieged with mutinous raging internal turmoil and crisis? 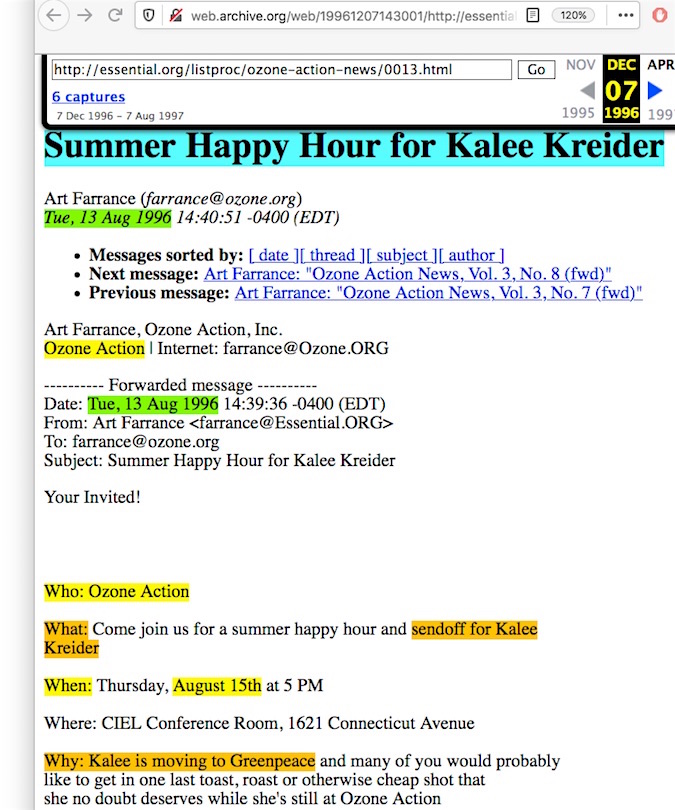 She certainly brought the same material with her into her position as Greenpeace’s Climate Campaign Director just 9 months after she landed there.

But did she jump ship because she had inside knowledge, or at least minimally a well-informed guess, of what Greenpeace was going to be concentrating on at the time of its ultimate last summer 1997 crash? Was she someone who already understood the need to dump grassroots activism in favor of having access to and influence over politicians?

Did her jump to Greenpeace pave the way for her to be among the “small group of environmental activists” who got private access to Vice President Al Gore at the November 1997 United Nations Framework Convention on Climate Change conference for the finalization of the Kyoto Protocol, a conference where her arguably inordinate access to the media allowed her to spout accusations targeting the fossil fuel companies…. where she also spoke of the need for Greenpeace and others to skip trying to influence politicians in favor of grassroots organizing?

Did her jump to the sinking ship of Greenpeace enable her to influence officials in 1997 at the United Nations Intergovernmental Panel on Climate Change itself, in a 1998 (or 1997, according to this page) IPCC Special Report? Was it a springboard into a UN association that apparently led to additional public relations work and other related association to the United Nations to the present day?

Regarding the most recent news about the House Oversight Committee, they can demand board members of fossil fuel companies and other ‘industry associates’ to appear at hearings as often as they wish, but those victims will still have no clue what Chairwoman Maloney is talking about regarding ‘documents relating to payments to shadow groups to spread disinformation.’

What might happen if the investigations turned 180° in the other direction, against the core clique of enviro-activists who’ve long promulgated the accusation that fossil fuel executives colluded in sinister disinformation campaigns with ‘shill scientist experts’ to undercut the certainty of catastrophic man-caused global warming?

What I show at this blog is what can be found by anyone on the internet. How much more troublesome material would arise from Federal agents undertaking warrant-approved raids of the offices and homes of this little clique?