To get more cash for his agenda. No joke, actually.

Among the collection of current and former Greenpeace USA executive directors, the particular one I’m detailing in this blog post is John Passacantando, as opposed to his successor Phil Radford, who apparently crossed the road to oversee whatever the Progressive Multiplier Fund organization does.

In my efforts to figure out what the origins of the smear of skeptic climate scientists was back in 2010, particularly the allegedly leaked (and as it turns out, worthless) memo phrase “reposition global warming as theory rather than fact,” I was ultimately led to the mystery organization referred to as “Ozone Action,” which Passacantando co-founded. Ozone Action being the entity described as “focusing exclusively on global warming” despite its name indicating otherwise. Around the time of Ross Gelbspan’s association with it, the group was splitting its focus between global warming and ozone depletion, and prior to that, they focused exclusively on ozone depletion, as its name justifiably suggested. But that’s all another story.

As I noted in my August 8, 2014 post about the disappearance of Passacantando’s Facebook account, I couldn’t readily find the reason why Passacantando stepped away from such a prominent position at the internationally famous Greenpeace organization. Surely that would be the one place where he could do the most to advance his second choice of environmental causes, wouldn’t it?

At the time in 2011 or a year later, the only public presence I could find for Passacantando was his then-newly formed but otherwise hugely obscure venture called “Our Next Economy LLC,” which, when it was still online, contained a start date claim for the formation of Ozone Action contradicting others that I’d seen. I wanted to include that contradiction in my September 20, 2013 post about another Ozone Action alumnus, Kalee Kreider, and her strange claim about creating Ozone Action. However, the “Our Next Economy” site was already offline by that time, and the Internet Archive site’s captures of its various pages didn’t save the specific page with that contradiction.

What did his “Our Next Economy” do? As near as I could tell, it was a one-man blog site operation from May 2009 to March 2011 where Passacantando offered little more than random short opinion posts, most of it quite short, containing material of little or no importance to the issue overall. It looked like he’d traded a likely very good top administrator salary as a prominent influential policy figure for the fast track to self-imposed poverty. I wasn’t blessed with that much savings when I began blog posting here, and I can personally attest how there’s no money in it. Even internationally famous bloggers with incredibly important content like Anthony Watts still have to beg for money to offset unusual but necessary expenses.

So why did John Passacantando cross the road from the fame and financial security of his Greenpeace position over to whatever “Our Next Economy” does?

From the IRS Form 990 of the Sustainable Markets Foundation organization marked 2010, within its Part VII, Section B, Independent Contractors “that received more than $100,000 of compensation“: 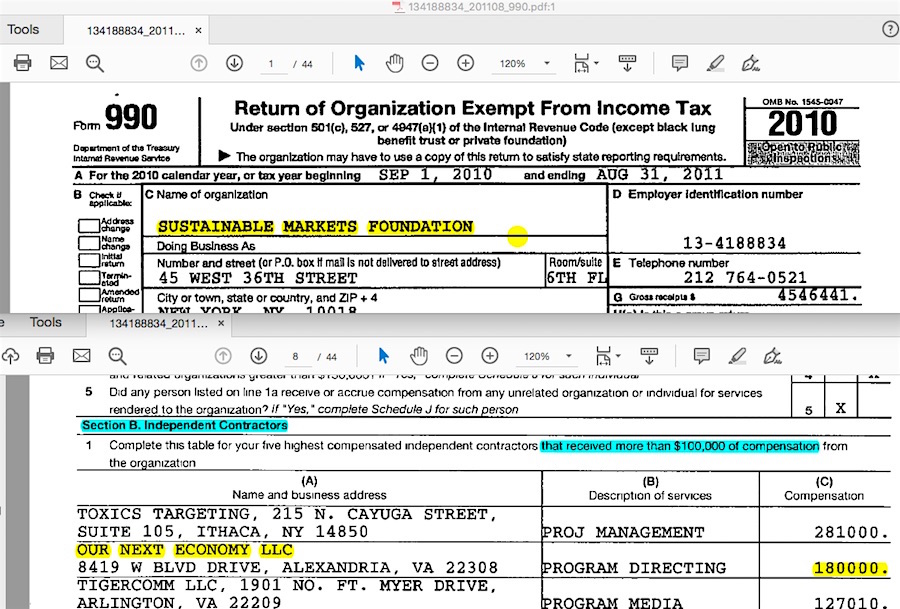 That is $180,000. For short little blog posts of personal observations of the climate and quasi-related issues like population control? 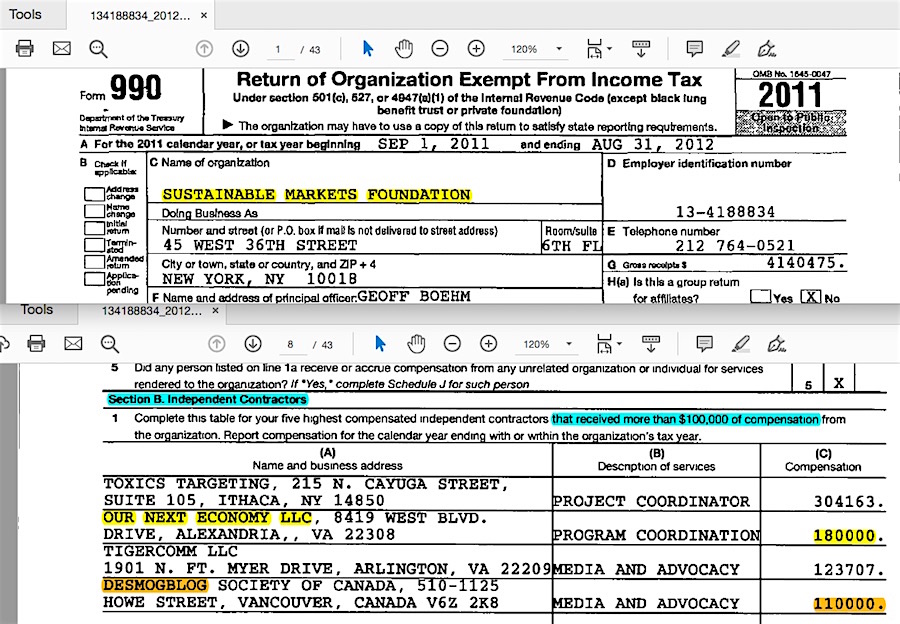 Same thing the next year. At that time, if I’d received $360,000 in the span of two years, I could’ve retired and lived comfortably for the rest of my life. But look who else shows up at that Form 990 now: Desmogblog, the place inspired by and built on the works of Ross Gelbspan, co-founded by a guy who proclaimed to know nothing about climate science who nevertheless created Desmog in order to expose those lyin’ skeptic climate scientists.

What changed the year after that? 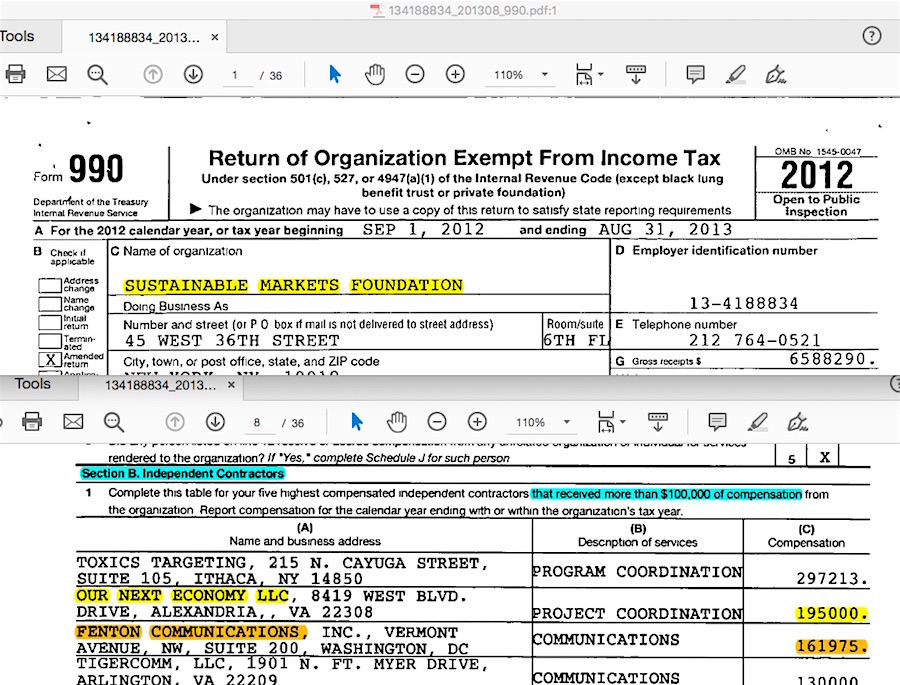 For expediency of getting to the point, let’s skip ahead a couple of years. What do we find? 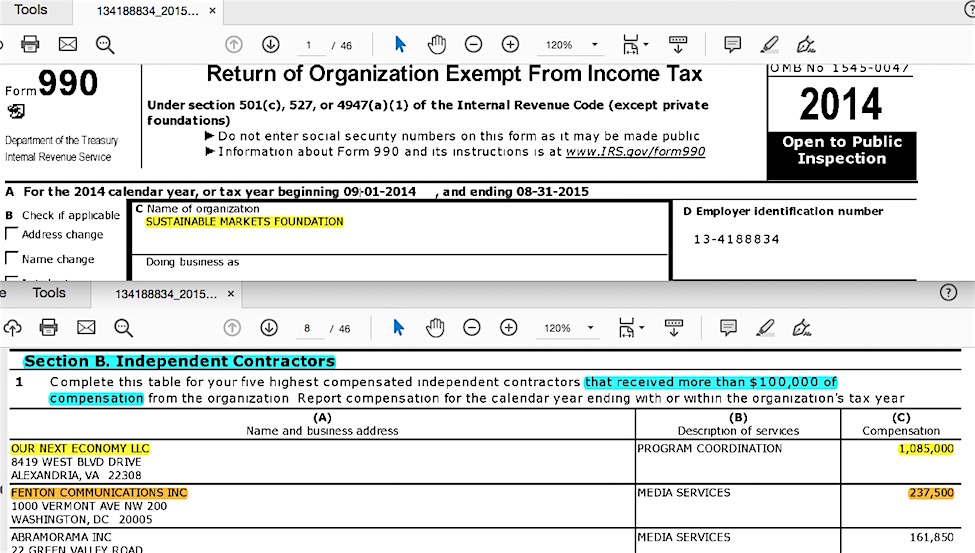 Fenton is back, and Passacantando received over one million dollars. I would have been thrilled to receive just the “over” amount seen there.

Skip ahead another few years. What do we find? 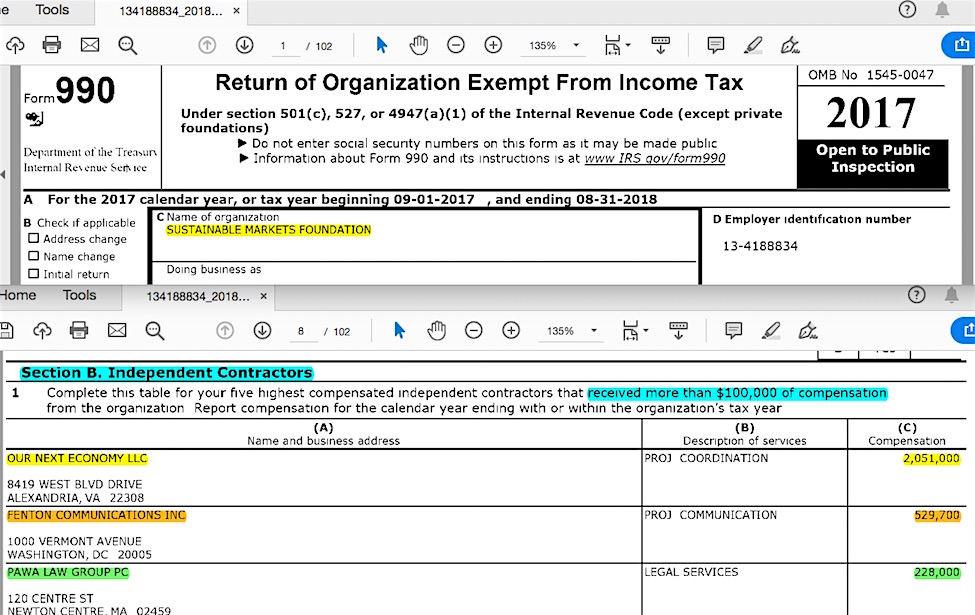 Fenton’s back, Passacantando received over two million dollars, and now this pair is joined by “Pawa Law Group PC.” Attorney Matt Pawa, the one with the “mp@pawalaw.com” email address. Pawa, who was revealed as being part of an apparent effort with John Passacantando and another Ozone Action alumnus Kert Davies, to portray Exxon as a corrupt institution. That Kert Davies, and that Matt Pawa, with his bizarre connections to Ross Gelbspan’s favorite accusation. Poor Fenton and Pawa in the above 990 form, though. They got more money the year prior.

Hard to miss the pattern there, and far harder to miss the massive problem with all of that. I only recently stumbled into the above IRS 990 forms after my own independent curiosity search for the string of words “Our Next Economy.” That prompted me to relay this to a few of my researcher friends, but it turns out they were already ahead of me on finding this level of independent contractor payments. Spencer Walrath reported on this last October regarding Kert Davies’ CIC, “Climate Investigations Center Utilizes Dark Money Network to Obscure its Funders,” where he sources info from the Capital Research Center’s Hayden Ludwig while detailing what Passacantando’s money tally is:

Nice work if you can get it.** Fenton and Pawa Law and Desmogblog are all places with multiple big salary associates, with all the expenses professional businesses have. The last available address for “Our Next Economy” when its incoming money tripled goes to an ordinary one-family house in a residential neighborhood. But it appears John Passacantando is not merely an unemployed solitary blogger with a dead website.

I remain focused on the way the promulgators of the ‘crooked skeptic climate scientists’ accusation tie together, and on the ways that their accusation narratives always fall apart. I’ve never actually cared what they were paid and how they were paid, but this now presents a new layer of questioning.

Would anybody in their right mind actually pay over a million dollars just to have one guy ponder how to portray Exxon as a corrupt institution? Or is there more to whatever “Our Next Economy” is, and are more people associated with this place which otherwise has practically no public presence? What is Passacantando tasked with doing, after receiving all that cash? Is what he does with it completely legal?
————————————————————————
There’s always more to be asked: “What Does Nearly $5 million Buy?”
**[Author’s 12/2/20 addition, piling on: So far, I haven’t yet found anything newer than the above 2017 Form 990 from Sustainable Markets Foundation, but I’ll keep looking and will add it here when I do. Meanwhile, I did just find a 2018 Form 990 from the Tides Foundation, courtesy of ProPublica where their payment to John Passacantando’s “Our Next Economy LLC” was $375,000 … for “equality and human rights” work. But does Passacantando ever bother to disclose what specific work that is, online or anywhere else? ]