How’s it going to work out when you have to defend your accusation that this ‘leaked memo’ directive is smoking gun proof that the fossil fuel industry ran disinformation campaigns to deceive the public about what the industry knew about the certainty of man-caused global warming? Just askin’ … for potentially 218+ friends ….

No exaggeration there about that worthless-as-evidence memo directive phrase (it was never implemented anywhere) being the only thing enviro-activists have in their arsenal to support their accusation about the fossil fuel industry bankrolling disinformation campaigns, and I’m not kidding about the sheer repetition of it recently which proves just how devoid that mob is of anything else to support their accusation, and how desperate they’re becoming in using it to keep the accusation alive. END_OF_DOCUMENT_TOKEN_TO_BE_REPLACED

What does it look like if a person says, “I want in to the world of ecological protection”? What does that even mean?

I know of someone who had that exact generic wish. As usual with any problem surrounding anyone involved in the promulgation of the “crooked skeptic climate scientists” accusation …… there’s always more problems. END_OF_DOCUMENT_TOKEN_TO_BE_REPLACED

That’s rich, in more ways than one. As I noted in a GelbspanFiles blog post earlier this spring, one hallmark of enviro-activists is their phenomenon of psychologically projecting what they are as accusations of what skeptics of catastrophic anthropogenic global warming (CAGW) are. The only ‘rehashing of old tropes’ going on here is ICN’s rehash of an essentially 30 year-old accusation that any industry connections whatsoever completely taints what CAGW skeptics say. Their rehash was apparently fed to them by the disingenuously repackaged “Desmog” outfit, an organization self-described as a pure public relations people having no expertise in climate science, which was also self-described by one of its co-founders as being created entirely to expose CAGW skeptic scientists as industry-paid liars. END_OF_DOCUMENT_TOKEN_TO_BE_REPLACED

I’m talking about the lights going out at two websites, Ross Gelbspan’s beloved “The Heat is Online” and Greenpeace USA’s beloved “Greenpeace Investigations.”

Somebody forgot to pay the electric bill? Just askin.’ END_OF_DOCUMENT_TOKEN_TO_BE_REPLACED

…. and retain credibility derived from your self-imposed title of ‘expert about the history of climate disinformation’?

Just askin,’ yet another in my series of posts asking questions that not only the inquisitive public and unbiased reporters should be asking, but also the law firms working for the defendant energy companies in the current 25 “Exxon Knew”-style global warming damages/cost recovery lawsuits, along with unbiased, objectives members of the US House Oversight Committee. You’ll never how weak and indefensible that situation is until you know what and who led to the current situation.

Kalee-who? You’ll be glad you asked. I covered her problems back in September 2013, but there’s always more to cover, especially when it is relevant to current-day situations and questions that should be asked in courtroom settings and congressional hearings. END_OF_DOCUMENT_TOKEN_TO_BE_REPLACED

Just askin’ — if it can be argued that …

But the problems and the questions don’t end there for Oreskes, END_OF_DOCUMENT_TOKEN_TO_BE_REPLACED

Just askin’, before the Big Tech effort to censor inconvenient questions spreads as far as into blogs like this. While the largest companies on the defendant side of all the “ExxonKnew”-style lawsuits are still exploring legal technicalities paths concerning changes of venue, what happens if the smaller energy companies’ law firms start pulling all the loose threads in the accusation where it’s implied that a certain set of ‘leaked memos’ with the awkwardly worded strategy goal to “reposition global warming” is proof that Big Coal & Oil had a corrupt pay-for-performance arrangement with skeptic scientist ‘liars-for-hire’? That memo set is presented as ‘evidence’ in the majority of the current “Exxon Knew”-style lawsuits, e.g. the most recent among them, Annapolis v BP’s paragraph 116. What will it indicate if efforts are made to quash those lawyers’ statements about the faults they find with that accusation? If legal analyst voices far bigger than mine start exploring whether that accusation is indeed a form of criminal libel/slander, what could the public interpret from an even more concerted censorship effort to silence those bigger voices? END_OF_DOCUMENT_TOKEN_TO_BE_REPLACED 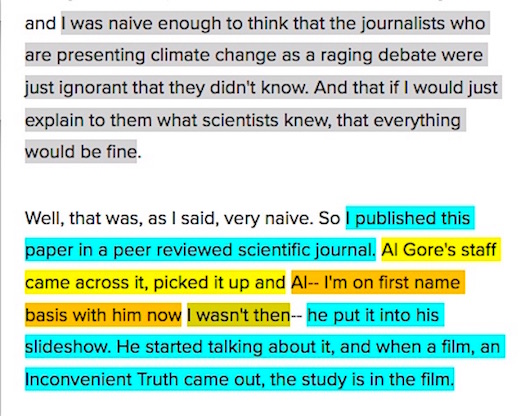 Regarding Naomi Oreskes’ “Merchants of Doubt” co-author also being on a similar first-name, or any-name basis with Gore ….. not so much, it seems.

I pointed to Oreskes’ little name-drop in only fleeting fashion in my June 17, 2020 blog post. Time now to explore it further as yet another example of a widespread problem with the entire ‘crooked skeptic climate scientists’ accusation: pull on even the smallest of loose threads in that accusation, and the fabric of the overall accusation starts to unravel in multiple directions instead of cinch together more tightly. END_OF_DOCUMENT_TOKEN_TO_BE_REPLACED