These lawsuits suing energy companies ‘to recover the costs’ of damages from global warming are really stacking up now. In addition to Imperial Beach, San Mateo, Richmond, Santa Cruz, Rhode Island, Baltimore, Honolulu, the District of Columbia — just to name a few — Hoboken, New Jersey is among the very latest communities to unwisely join this collection with their with their September 2 filing, Why is this unwise? If the industry defendants’ lawyers decide to prominently challenge the veracity of the core accusation within the lawsuit, namely that fossil fuel industry executives employed ‘shill’ skeptic climate scientists in disinformation campaigns to deliberately deceive the public about the harm of global warming, it could not only expose how Hoboken officials didn’t undertake basic due diligence to check the basic veracity of the accusation, it could also torpedo all the rest of the lawsuits across the country in a similar manner, while further exposing how the mainstream media completely overlooked the obvious faults in these lawsuits and in the 25 year+ history of the basic accusation and the core clique of people who’ve promulgated it.

In its claim that industry-orchestrated disinformation campaigns have a long history, does this Hoboken v Exxon filing rely on the notorious “reposition global warming” set of ‘leaked memos’ as evidence for that claim, similar to so many of the others ranging from the 2008 Matt Pawa-led Kivalina v Exxon to the 2017 Richmond v Exxon one led by the Sher Edling law firm? Yes it does. 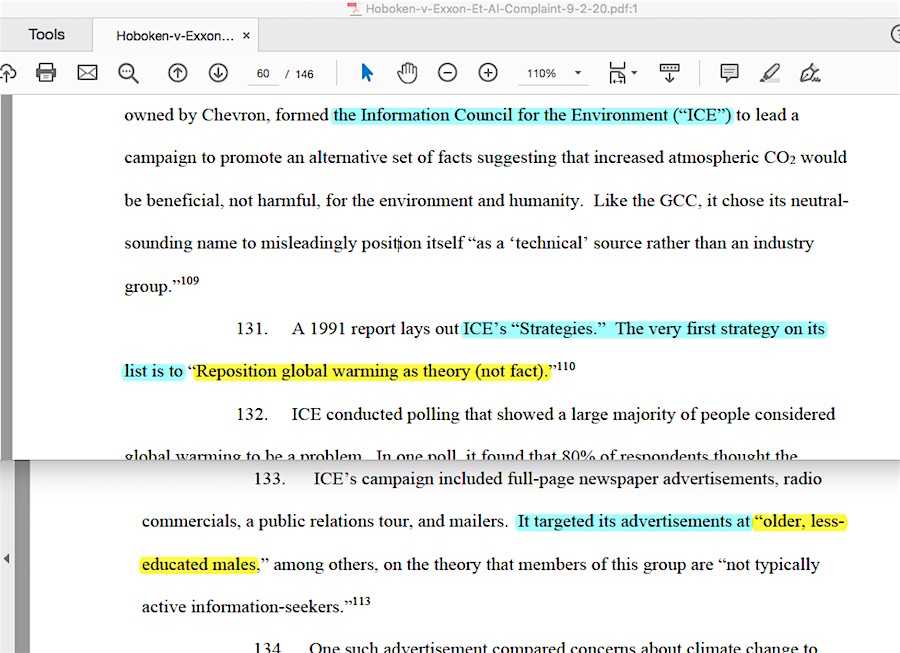 In its claim that industry-orchestrated disinformation campaigns exist, does this Hoboken v Exxon filing, similar to so many of the others ranging from the 2008 Matt Pawa-led Kivalina v Exxon to the 2019 Honolulu v Sunoco one led by the Sher Edling law firm, rely on the notorious American Petroleum Institute-attributed “victory will be achieved” set of ‘leaked memos’ as evidence for that claim? Yes it does. 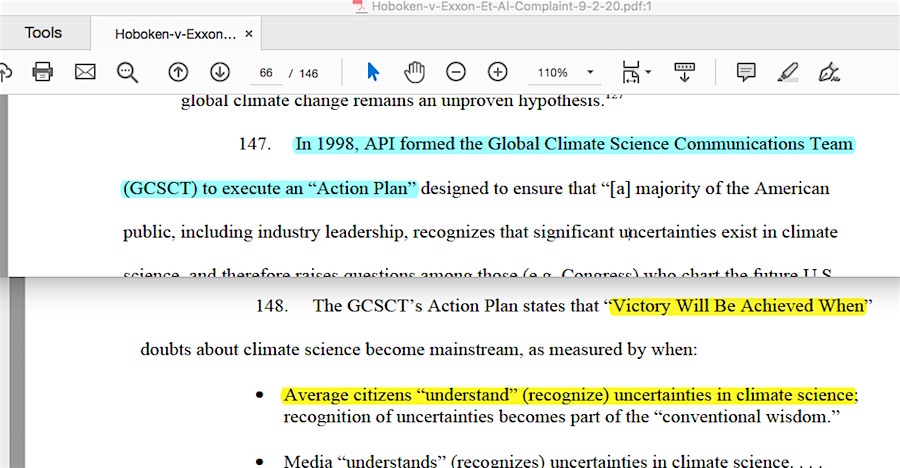 Similar to all those other lawsuits, does this Hoboken v Exxon filing offer any other evidence containing even a semblance of indication that some sort of pay-for-performance arrangement exists between fuel industry executives and skeptic climate scientists where the scientists knowingly put out material to the public that first met the approval of the industry executives? No, it does not.

What’s the fatal fault with the “reposition global warming” and the “victory will be achieved” memo sets that the Sher Edling-led and Pawa-led lawsuits are enslaved to? As I detailed separately at length at GelbspanFiles here and here, both sets were unsolicited proposal ideas about strategy and targeting that were never implemented by the groups they were presented to (the “reposition” memo set being rejected outright), and thus were not only never part of any kind of informational campaign at all, they weren’t seen by any significant amount of top industry administrators who’d therefor talk among themselves about what a brilliant disinformation set of guidelines to those were to follow.

Is this Hoboken v Exxon filing led by either the Sher Edling or Pawa (Hagens-Berman-Pawa, to be more precise) law firms? No, it is not, which is a bit of a break in the pattern of lawsuits handled by just those two firms. A few of these lawsuits are not. The 6/25/20 D.C. v Exxon filing, with its enslavement only to the API “victory will be achieved” memo set, is not one of the ‘simply-change-the-plaintiff-name’ Sher Edling boilerplate copy versions, however, it does indicate there was some kind of assistance from Sher Edling. But as I showed in my July 7, 2020 GelbspanFiles post, a section of the D.C. filing is essentially a copy of a section out of the jointly filed 2018 Boulder City/County / San Miguel County v. Suncor lawsuit, which were handled by the EarthRights International group. The intriguing thing in that situation is the way the D.C. filing repeated a basic assertion error in the Boulder / San Miguel filings that can be traced to ……… Matt Pawa’s 2008 Kivalina lawsuit.

Does this Hoboken v Exxon filing have a similar connection problem worthy of deeper examination? Yes, it does.

As reported by Energy in Depth’s September 2 article, the new law firm players in these strings of lawsuits is Emery Celli Brinckerhoff Abady Ward & Maazel LLP and Krovatin Nau LLC, who have no readily identifiable presence in the global warming issue. Do these new guys have any appearance of a similar ‘copy ’n paste’ problem from other global warming lawsuits? The jury might still be out on that question.

As I noted in my dissection of one in the series of Sher Edling lawsuits, all of those are boilerplate copies of each other, where right from the start they share the same introductory paragraph wording. To the credit of the law firms handling this Hoboken filing, we see only a few words that are very similar to, for example, the Sher Edling-handled Honolulu filing. Might be just a coincidence. 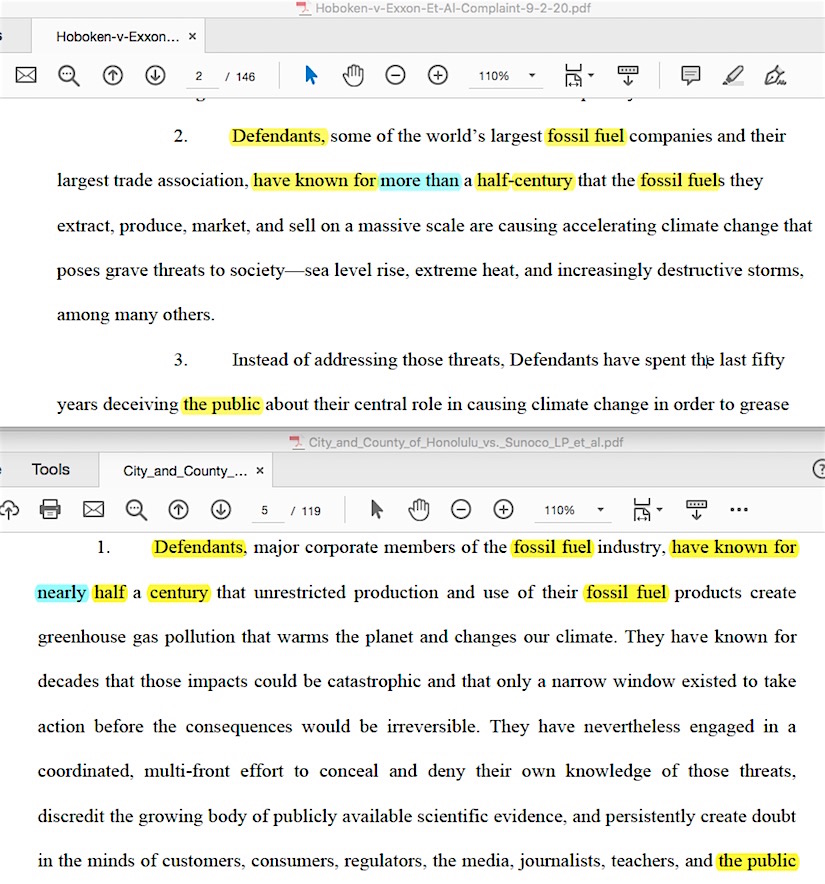 Regarding the Hoboken filing’s passage about the API “victory will be achieved” memo …. 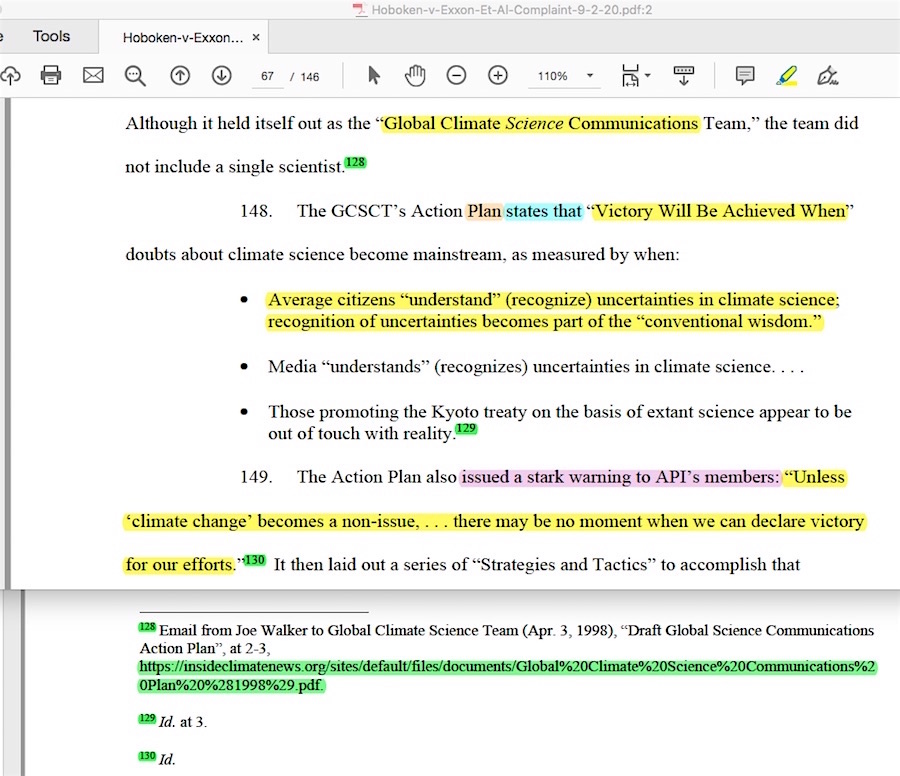 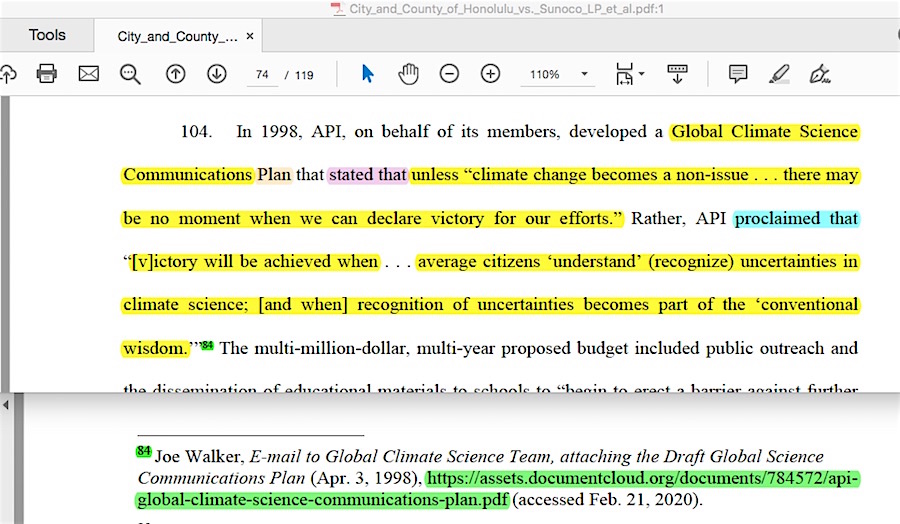 … the two lawsuits don’t share any particularly similar wording, although it is rather troubling that both seem to employ a distraction effort in citing the PDF file copy source of the memo set. The Hoboken one’s source is Inside Climate News, where the perception might be that the memos were discovered by a seemingly independent, non-partisan news outlet. Honolulu’s source, as I detailed in my dissection of that filing, ultimately turns out to be ex-Greenpeace worker Kert Davies and his current Climate Files website. In my pair of blog posts here and here, the original ‘revealers’ of the API memo set, worthless as it still ultimately is, were either Greenpeace or the National Environmental Trust … or some enviro-activist worker at Shell Oil. And, Inside Climate News’ copy of the memo set is, as I showed here, is identical to the old Greenpeace set.

The Hoboken filing cites Kert Davies’ Climate Files site for thirteen items, why not dispense with the ‘Inside Climate News middleman’ and instead cite Davies one more time for the “victory will be achieved” memo set, since he is closer to the original source?

Meanwhile, there is the Hoboken filing’s passage about the “reposition global warming” memos. Compare what’s seen in the Sher Edling boilerplate passage for the Honolulu filing … 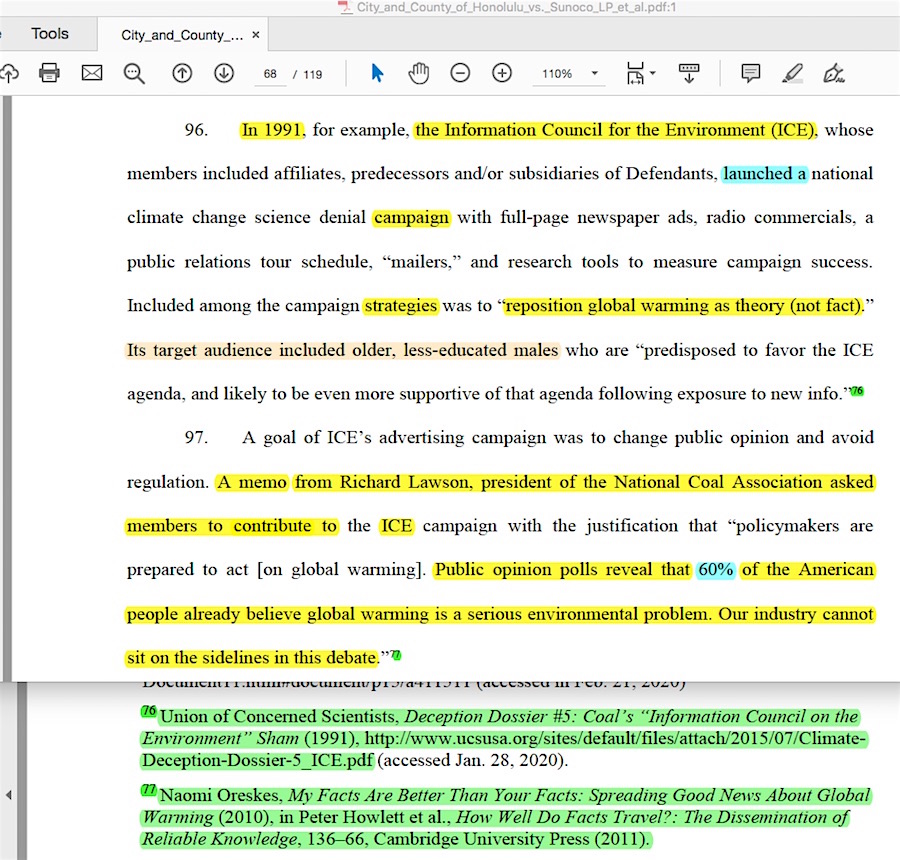 … to the one for Hoboken: 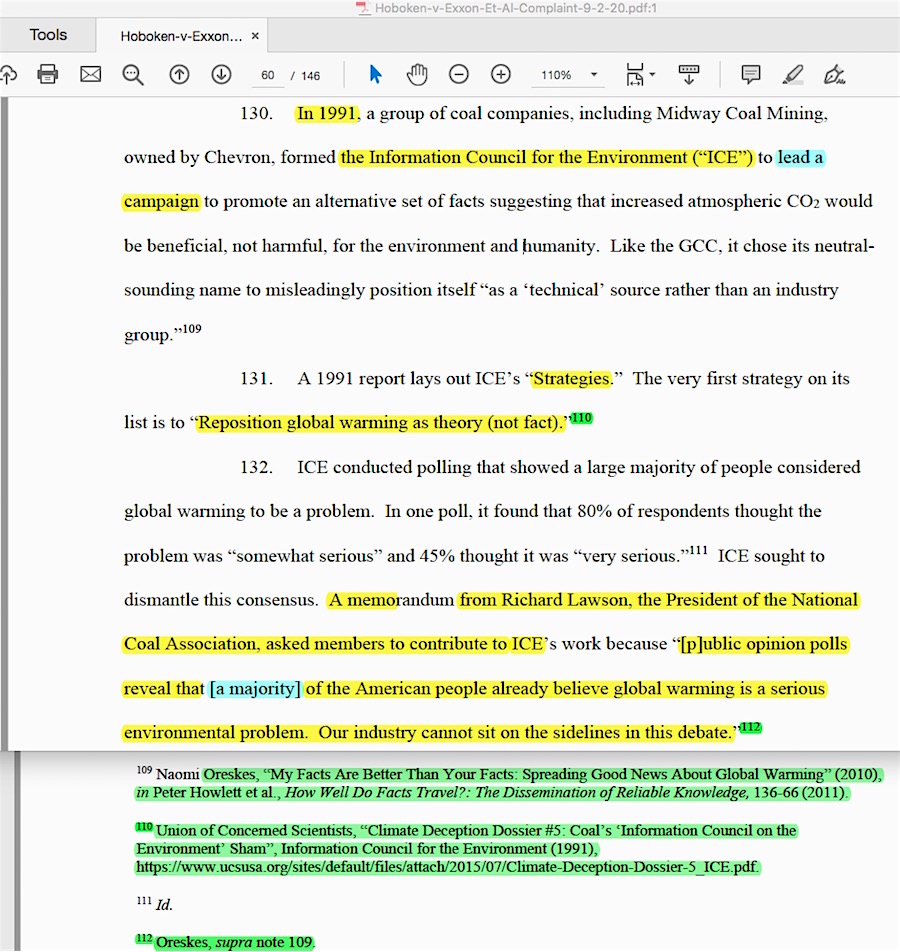 The wording looks quite a bit more similar (the sentence about “full-page newspaper ads, radio commercials, a public relations tour” in the Honolulu filing appears nearly identically on the next page in the Hoboken filing). How much of a coincidence is it, though, that both filings cite the Union of Concerned Scientists as the source for the “reposition global warming” memo set, while utilizing the identical quote by the National Coal Association’s Richard Larson, where the source for it is Naomi Oreskes’ very obscure book chapter contribution to an even more obscure book?

Questions need to be asked here by authoritative, influential people about how these new law firm people got into this lawsuit. By contrast, Sher Edling proudly proclaims their climate issue involvement, while Matt Pawa was declared by a Huffington Post article as “the legal brains” behind global warming lawsuits. Here, the Emery Celli Brinckerhoff Abady Ward & Maazel LLP firm doesn’t even mention any expertise associated with environmental issues, nor does the Krovatin Nau firm. So, one core question to pose is how their Hoboken filing ended up with such a passage and citation sources that is so similar to Sher Edling’s.

Shouldn’t a new set of layer faces in the global warming lawsuits arena been able to come up with something new as evidence to prove ‘Big Oil & Coal’ used shill scientists to deceived the public about the certainty of man-caused global warming, instead of coming up with the same old trash connected to the same old highly suspect promulgators of that trash? Namely:

The potential news of the energy industry defendants deciding to prominently counter the core clique of enviro-activists who’ve promulgated the accusation for the last 25+ years would have a major ripple effect beyond the science of the issue; equally so, if one or more major news outlets questioned every angle of the accusation and the people behind it. Besides potentially imploding the legacies of the top pushers of the accusation, it could expose, in devastating fashion, how the mainstream media abdicated its duty to at least minimally examine the accusation to see if it had viable supporting evidence or not, or whether any of its core promulgators were totally above reproach.