When a person claims to have been innocently speaking on a specific topic, only to be horrified by sudden, personal, vicious attacks over it, to the point of becoming sick, then learns soon afterward how this isn’t a unique situation but is instead part of a larger orchestrated plot run by sinister forces to attack other scientists the same way, the person takes on a heroic status by exposing the organizations and actors behind the attacks.

What happens when there were no personal attacks in the supposedly comparable situation, though, and most of what this person says about the tangential details of the comparison is strangely inconsistent?

This is entirely the dilemma we all face when we view “Merchants of Doubt” book author Naomi Oreskes. Whether its her narratives about how her co-author Erik Conway alerted her to who her ‘attackers’ were, or her other tales which reduce Conway’s role to near insignificance, such as the version I showed in Part 1 where she largely credits Ben Santer for her path of discovery, the basic premise is always the same: she was minding her own business writing / presenting about how the science of oceanography works; wrote a detailed study paper on the scientific consensus for man-caused global warming as an outgrowth of interest in a single remark she made about consensus in one of her presentations; was viciously attacked for her ‘simple truth;’ and soon found out about the sinister industry ties her attackers had. It could be reduced to a headline, “Innocent Researcher Attacked; She Exposes Them as Evil Industry Shills.” What a heroine she is, for standing tall and revealing a massively troubling conspiracy!

You can’t miss the manner in which she sets up the opening of “Merchants of Doubt” with claims that Lawrence Livermore atmospheric scientist Dr Ben Santer found himself – minding his own business – as the innocent victim of a similar kind of industry-led personal attack against his ‘simple truth’ about the certainty of man-caused global warming. An unassuming good guy, attacked by vicious sinister fossil fuel industry forces bent on preserving their evil corporate interests by keeping doubt alive via the same self-preservation tactics the tobacco industry used against the established harm – settled science! – of cigarette smoking. 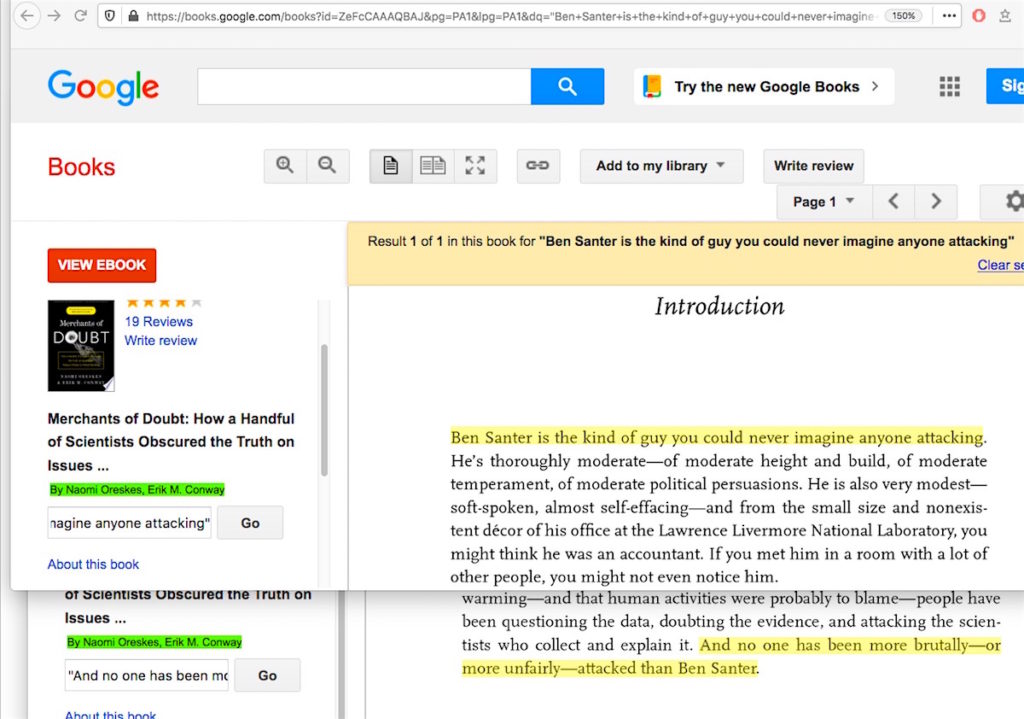 Problem is, the people who questioned Santer’s actions regarding his alteration of an IPCC chapter report don’t say what they did was a personal attack. Other analysts of the situation don’t call it an attack. A review of a trio of letters labeled as “attack” letters gives no actual indication that they were attacks, personal or otherwise. However, the bigger problem is that Santer himself doesn’t even term the event as a personal attack.

Let’s run through some of that. From the New York Times August 6, 1996 “At Hot Center of Debate On Global Warming” report: the rep at the Global Climate Coalition says Dr Santer wasn’t personally attacked:

One of the chief critics says no personal attack on Dr. Santer was intended. “There wasn’t any implication that we thought he was doing anything wrong,” said John Shlaes, director of the Global Climate Coalition, an industry lobbying group that first raised the questions about chapter 8. Mr. Shlaes complained that the post-Madrid changes in the chapter were not publicly revealed, discussed or formally approved before the report was published. “It was basically the process we were addressing,” he said

Within the three Wall Street Journal letters – full text of the June 12 one here and the two July 11 letters here or here – that are widely described as “attacks” (or worse variations thereof) on Ben Santer, the first one written by Frederick Seitz only mentions Santer one time in a cursory manner, while his second one mentions Santer in relation to questionable actions; the July 11 letter by Dr S Fred Singer doesn’t mention Santer’s name at all.

Back in 2008 within the Climate Resistance website’s dissection of Naomi Oreskes’ “The American Denial of Global Warming” 2007 video presentation, blog authors Ben Pile and Stuart Blackman recapped what Oreskes said about the alleged ‘Santer attack’ event, and concluded,

This “personal attack” was neither groundless nor personal.

Hold that thought about Oreskes’ characterization of the event for a few moments.

What has Ben Santer said about the people questioning his alteration of the IPCC Chapter 8 text? Within this 2015 “Q&A: Dr. Ben Santer’s climate crusade comes to Minnesota” interview, he says,

I don’t feel like I’m a victim — Some people will try to portray me as some kind of victim of powerful forces of unreason but I don’t see myself as a victim.

In another 2015 video interview, Santer begins recounting his impression of the Chapter 8 alteration controversy at the 20:18 point, and ultimately concludes at the 22:00 point, regarding his most notorious sentence alteration,

Lots of people didn’t like that ‘balance of evidence’ statement, and, no personal animus, but I was the carrier of that message. So you take down the message by taking down the messenger.

[8/28/20 Author’s addition, piling on: From the American Chemical Society’s Environmental Science & Technology site “The many travails of Ben Santer” August 9, 2006 interview, he provides this additional corroboration,

In 1996, at the time of publication of the IPCC Second Assessment, I was a messenger bearing news that some very powerful people did not want to hear. So they went after the messenger. … I’m sure there was no personal animus involved. I just happened to get in the way … ]

[11/23/20 Author’s addition, piling on redux: From Dr Santer’s own Washington Post op-ed tirade eleven years after the above added example, he said the following, regarding “nonscientific criticism” of his IPCC Chapter alteration:

… You spend years defending the “discernible human influence” conclusion. You encounter valid scientific criticism. You also encounter nonscientific criticism from powerful forces of unreason, who harbor no personal animus toward you but don’t like what you’ve learned and published … ]

If a victim is supposedly so blindsided by personal attacks that he is left “visibly shaken,” isn’t it rather odd that he doesn’t characterize the situation as such?

Besides Ross Gelbspan, though, who else is it calling the situation a set of attacks? Naomi Oreskes.

In the above-noted 2015 “Q&A” interview where Santer didn’t feel like he was a victim of a personal attack, who was he contradicting? Oreskes and her “Merchants of Doubt” co-author Erik Conway. 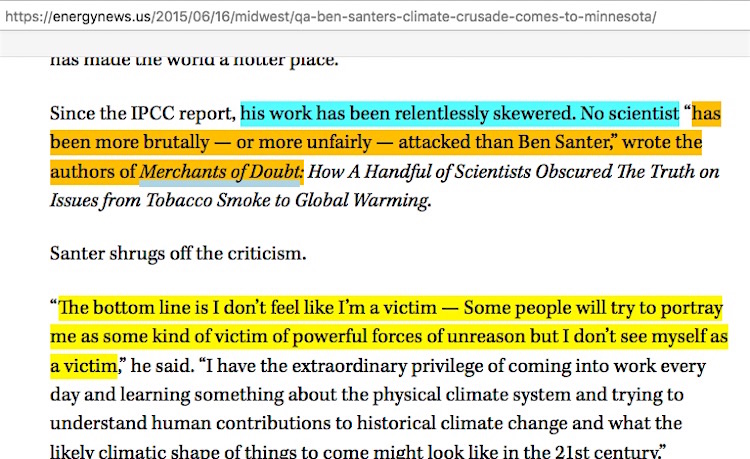 In the aforementioned 2007 Oreskes “The American Denial of Global Warming”video presentation, she described Santer as the recipient of “a highly personal attack,” where Dr Singer was “the leader of the attack.” Within a 2011 Ireland Independent article about Dr Santer, readers are told, via “Merchants of Doubt” that …

… he has withstood scandalous personal attacks … Santer was attacked in the Wall Street Journal … The allegations were shocking and couched in personal terms.

In a 2010 LA Times written by Oreskes and Conway that’s little more than a vehicle to publicize their newly-published “Merchants of Doubt” book, they said, that Frederick Seitz (no mention of Dr Singer) and the Global Climate Coalition “launched personal attacks on scientists” which included Ben Santer. Just this past November* in an article appearing in The Asia Times, Oreskes once again repeated the claim that nefarious agents of the fossil fuel industry hit Santer with a personal attack.

[*Author’s 11/17/20 addition, piling on: Just a month earlier at a U.S. House 10/23/19 hearing, Oreskes implied under oath that Santer was the victim of personal attacks accusing him of fraud. If she knew her description was significantly exaggerated, but uses this description to bolster her own stories about being personally attacked in her assortment of generic / Erik Conway / Ben Santer narrative versions, is it plausible she committed perjury at a Federal hearing?]

I’ve provided a “Recommended additional reading” links collection below, so that everyone may read in fine detail about the situation from both sides regarding Santer’s self-admitted action of altering the 1995 IPCC Chapter 8, and decide for themselves if the criticism Santer encountered fits the definition of personal attacks. If it can be reasonably concluded that the critics’ objections don’t fit that definition, the obvious question arises on why Ross Gelbspan and Naomi Oreskes choose to portray the critics’ objections the way they do.

Is it plausible that Gelbspan’s portrayal in his book “The Heat is On” was necessary because his chapter describing Santer’s appearance at a U.S. House hearing facing Global Climate Coalition critics could not have been titled “A Congressional Book Burning” if the critics weren’t villainous attackers but instead were asking obvious probing questions about Santer’s alteration of the IPCC report? Is Oreskes’ image as a ‘heroic discoverer of crooked skeptic scientists’ entirely dependent on the notion that alleged personal attacks against her compare to those Santer received? Namely the comparison where her literal sickness from the personal attacks prompted an indeterminate number of her colleague(s) to speak to Santer, which subsequently led her into her “Merchants of Doubt” secondary career?

If the “personal attacks” comparison is a critical central pillar that crumbles to dust in Oreskes’ tale of how she gained her current heroic ‘Exxon/skeptic climate scientists slayer’ status, what other explanation will she offer on what led her into this issue?

Meanwhile, there’s still more, related to all that’s offered in the links list below, but not mentioned in any of them: The Big Ben Santer Problem, Pt 4: If Everyone was in Total Agreement, Why Would there be Any Need to Change Anything?
————————————————————————