What follows is a little of my own experience with Dr Singer, and a summary of links to my work which I welcome others to use to combat the unending character assassination efforts against him.

My best guess for when I first heard of him was most likely the April 2000 PBS Nova program “What’s Up with the Weather?.” His response within the program about the Medieval Warm Period stuck well enough in my mind that I brought it up five years later in an email inquiry to Seattle Mayor Greg Nickels, on the news of his and other mayors’ support of the Kyoto Protocol. Upon receiving a reply from the mayor’s assistant which noted, among other things, “the scientific consensus is strong and clear,” I found Dr Singer’s email address at his SEPP website and forwarded the exchange to him along with a plea to let me know if I’d made any errors of assumption. His response was to say “Many think that the mayors are just grandstanding,” and that the alleged ‘consensus’ was little more than Naomi Oreskes’ highly questionable eight month-old December 2004 Science paper — hold that thought until the end of this blog post.

That was the beginning of what turned out to be over 200 emails I received from Dr Singer. The majority were directly to me, and a dozen or so were sent to other people that he also cc’d to me. Nearly all were quite short in response to my detailed inquiries or alerts, but were still very informative. One that stands out was his ire against accusers who said he was paid fossil fuel money to spread science disinformation.

One longer email I was cc’d in February 2011 was his rather late discovery of the massive June 2007 complaint sent to the UK’s Office of Communications (Ofcom) regarding the UK Channel 4’s program “The Great Global Warming Swindle.” Dr Singer had discovered very disparaging remarks about him in the complaint, and emailed the video’s producer to ask how to file a grievance against the false portrayals of him within the complaint. I had never heard either the video itself or the huge complaint against it, but within just an hour of studying the complaint, I spotted several of the ‘usual suspects’ I’d discovered just a year earlier who actively sought to discredit skeptic climate scientists via Ross Gelbspan’s infamous (and as I later confirmed, worthless) “reposition global warming” leaked memos accusation. My growing notes file about those connected with repeating the memos grew by around 3000 words regarding just that Ofcom complaint, and in 15 emails over the next year, I informed Dr Singer and others about what I had found. Ultimately, I turned it into a set of seven GelbspanFiles blog posts to explain all the fatal faults within it. For Part 5 in that set, where I took apart the tortured path behind the Ofcom complaint’s assertion that he was funded by Texaco, Phillip Morris, or Monsanto. He said he never was.

A more notorious email I was cc’d by Dr Singer was his October 2014 concern (later leaked to an unfriendly, biased ‘media’ outlet) about a line he thought was going to be in Naomi Oreskes’ upcoming “Merchants of Doubt” documentary movie, accusing him of being a “liar-for-hire.” It turned out the line was not in the final cut. The situation nevertheless was spun into an Inside Climate News story basically indirectly implying he was trying to shut down the movie because its content exposed damaging details about him. Not seen at all in that story was how Dr Singer resolved his concerns with the movie’s director about the “liars-for-hire” label, days prior to the ICN story coming out. I know, because I saw that exchange. ICN never contacted me about my participation in the email chain. After all the dust settled, it was much ado about nothing, offering zilch to prove Dr Singer was a fossil fuel industry shill.

Now, for any new readers arriving here who wish to see all the instances where I mentioned Dr Singer in a significant way, please check out my tag category for him: http://gelbspanfiles.com/?tag=s-fred-singer For really quick reference, here’s some of the major accusations against him where I detailed extensively how each one of those fall apart, along with two other notions about the way it was imperative to stop what he was doing at all costs:

The faulty narratives about Dr Singer don’t stop there by any stretch of the imagination.

Remember how I asked above to hold the thought about what Dr Singer said in 2005 about Oreskes’ highly questionable eight month-old December 2004 Science paper? That entire topic is a blog post I haven’t yet written, but have gathered a ton of notes about. The situation I need to dissect is elemental: prior to the appearance of Oreskes’ 2004 Science paper regarding a supposedly proven scientific consensus for man-caused global warming, it was abundantly clear that Dr Singer was publicly arguing that not only no consensus existed, but also that a “show of hands” had never validated a scientific conclusion in the entire history of the Scientific Method.

If Al Gore was going to declare in his 2006 movie that only a handful of skeptic climate scientists opposed the scientific consensus about man-caused global warming, and they were paid by ‘Big Coal and Oil’ to undercut that consensus, he was going to need a study proving the existence of such a consensus, and the roadblock in the way of the public accepting the idea of a consensus — prior to 2004 — was Dr S Fred Singer. 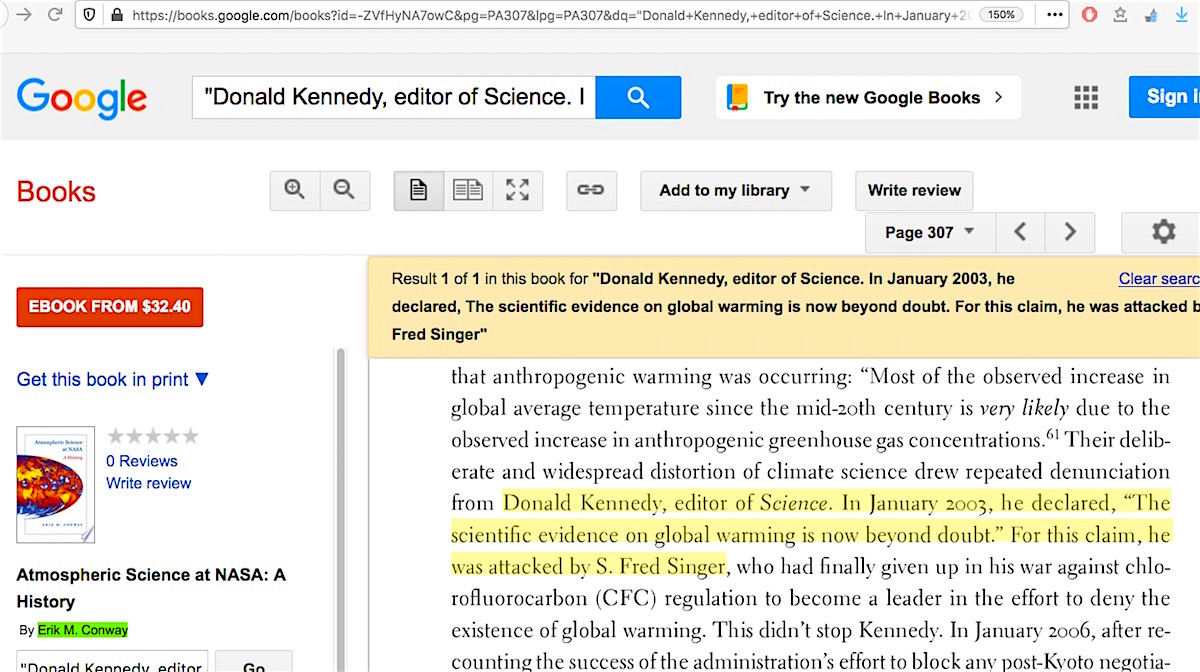 That roadblock needed to be removed, by any means necessary.

It will require a long, complicated post to explain it all, but the efforts to suppress Dr Singer’s concerns in that specific situation once again reveals a far larger political problem with the global warming issue.