In an amusing bit of irony, Dave Anderson, the policy and communications manager for the Energy and Policy Institute — the place claiming its aim is to “disrupt fossil fuel-funded misinformation” — has decided follow my GelbspanFiles Twitter account. Probably not for long; believers of catastrophic man-caused global warming like him tend to vanish immediately when they discover the material I tweet about undercuts everything they believe. There’s a backstory to this particular situation and how I’m prompted to create a new post category here, “What $5 mill might buy.”

I occasionally do internet searches for recent usage of the “reposition global warming as theory rather than fact” phrase and its variant “(not fact)” to see who is the latest to regurgitate it as evidence supposedly proving oil company executives conspire with skeptic climate scientists to run disinformation campaigns. At some point shortly after July 2017, one search result especially stood out at the time, a Miami New Times “Public Utilities Knew” article which dutifully regurgitated ye olde worthless “reposition global warming” strategy memo phrase. However, unlike so many other prior instances which rendered the phrase totally worthless with claims it was part of the Western Fuels Association’s “Information Council for the Environment” (“ICE”) public relations campaign (it was a rejected proposal, thus not evidence proving any energy companies used it as a strategy goal in sinister disinformation campaigns), the Miami New Times instead claimed …..

…… the Edison Electric Institute was principally behind the ICE campaign. That struck me as being a new and distinctly different narrative.

But the Miami New Times article also contained two other new-to-me details: First, I was curious to see what the “new report” was that the article mentioned. It was to the “Energy and Policy Institute,” which I’d never heard of at the time, and it turned out its summary had the stronger “spearheaded” wording near the bottom to describe EEI’s alleged role, just above the problematic (as detailed in my December 19, 2014 blog post) “Chicken Little” newspaper ad: 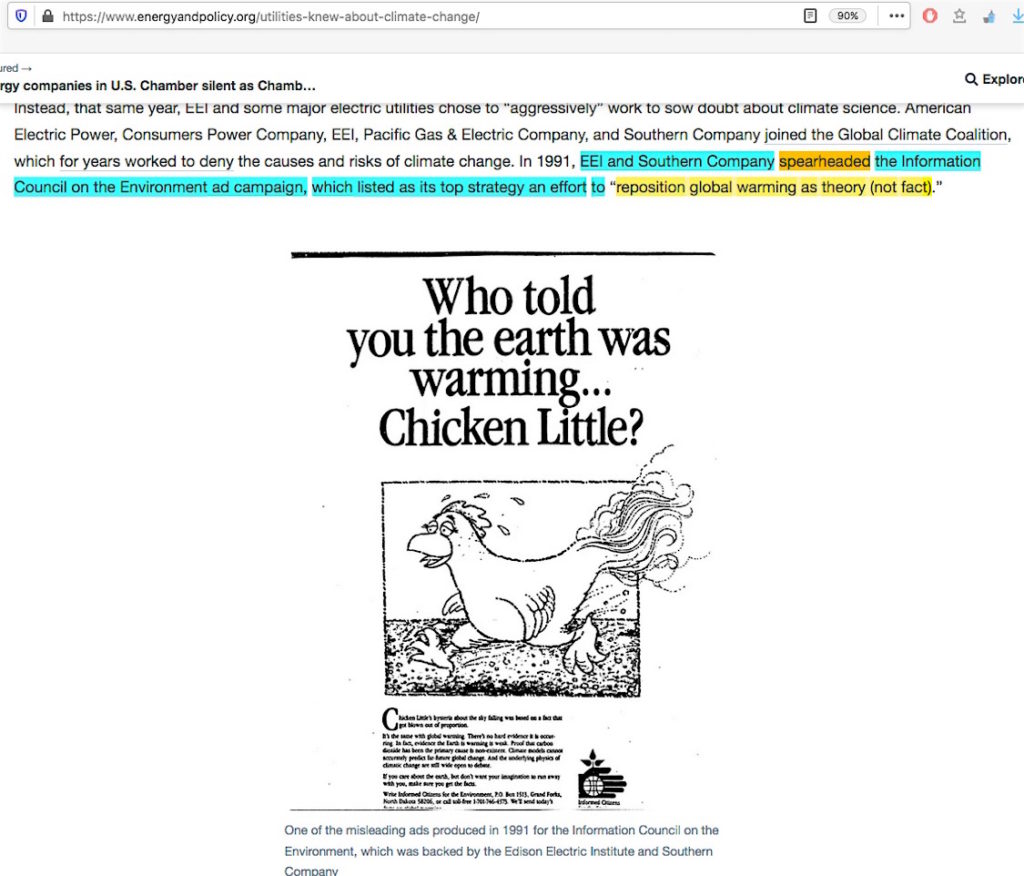 Aside: “Spearheaded” made so much of an impression on me that I remembered to use it in my October 2018 blog post on a related angle, to show how it was a false claim, clearly undercut by EEI’s declaration about their lack of active participation in the ICE PR campaign. EEI didn’t spearhead anything. Also, E&PI’s logo stuck well enough in my mind that I instantly recognized it when I clicked on Dave Anderson’s Twitter link to his employer’s Twitter account. For curiosity’s sake, I returned to their “Utilities Knew” summary – it doesn’t list any author, but who’s the top-listed author at the full 66-page downloadable PDF file? Dave Anderson.

More important, however, is what the July 2017 Miami New Times article’s link was for the “reposition global warming” memo: a page with the – again – problematic “Chicken Little” ad right at the top, at a site I’d also never heard of at the time, Climate Files. 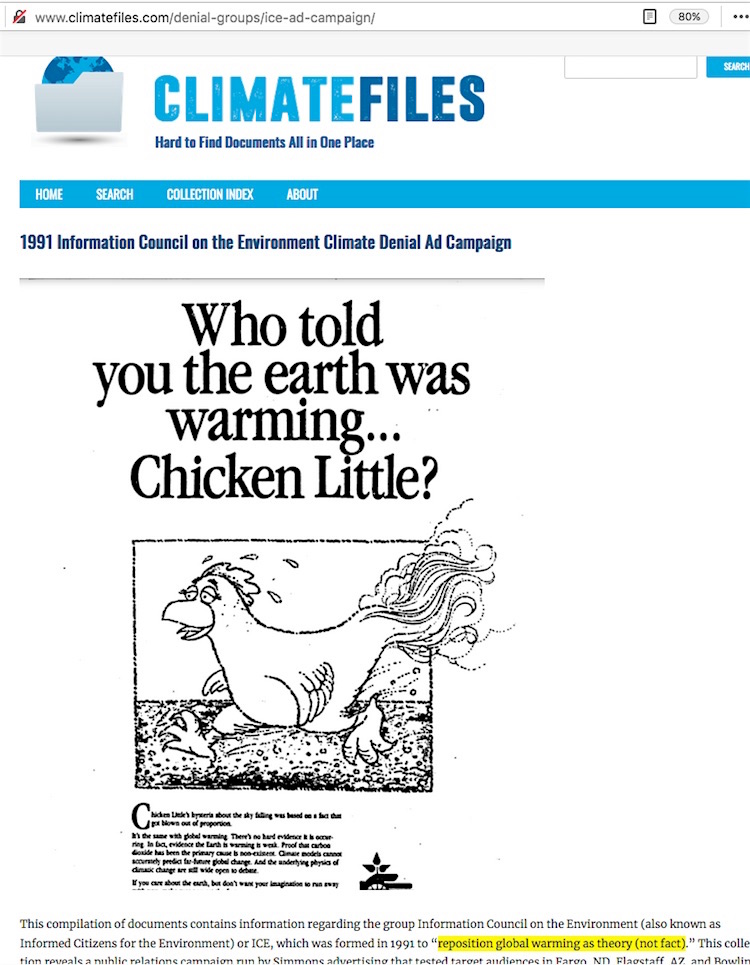 It didn’t take long at all for me to find that Climate Files belonged to Kert Davies, a person I’ve chronicled for years here at GelbspanFiles. However, the purpose for his new site perplexed me. A year after his Greenpeace 2013 departure, he seemed to have taken a directionless path in my eyes, although in early 2015 it looked like he still had some kind of unexplained influence with the media. So, I simply couldn’t guess why he was creating a new “archival database of news, information and documents” which was appeared to be a redundant waste of time and resources, since the “reposition global warming” docs and “victory will be achieved” docs and other much less important ones had already stockpiled at Greenpeace for over a decade.

That all changed for me when I read the San Mateo / Marin Counties / City of Imperial Beach v. Chevron trio of global warming lawsuits in early October 2017. In my dissection of that trio I noted how the citation source for the “reposition global warming” memos was now inadvisably the Union of Concerned Scientists — hold that for a few moments — and how the lawyers handling the cases were citing Climate Files for that old – once again, redux – problematic Greenpeace scan of the never-used “Chicken Little” newspaper ad. In my next post immediately following that dissection, “Introducing Climate Files,” I noted Kert Davies’ strange change in not attributing the “reposition global warming” memos to the Western Fuels Association, but instead to the Edison Electric Institute, while also noting how a Florida news article citing the Energy and Policy Institute was strangely doing the same.

Both the E&PI “Utilities Knew” summary, as well as the full 66-page report, cite Climate Files for the “reposition global warming” memos.

By the way, the the UCS Climate Deception Dossiers’ couldn’t even bring themselves to say where the second-most-often-cited memos indicting skeptic climate scientists of industry corruption — the API “Victory will be achieved …” ones — came from. UCS merely said, “The complete API “roadmap” memo is available online at www.ucsusa.org/decadesofdeception.” However, UCS’ 9 page set of scans is identical to Greenpeace’s 9 page scans and a 9 page DocumentCloud upload variant with Kert Davies’ name on it.

But, let’s get back to Environment and Public Policy. What entity felt compelled to retweet a college professor’s** barely currently three months-old Tweet about E&PI’s 2017 bombshell “#UtilitiesKnew” report? Kert Davies’ Climate Files. Who felt compelled to reply to another months old Tweet by E&PI with an irrelevant bit about the old Information Council for the Environment campaign that’s the heart of the smear of skeptic climate scientists? Kert Davies, who comically misspelled “utilities.”

Look back into E&PI’s press release page prior to their big “Utilities Knew” 2017 report, and they don’t exactly resemble an investigative group having the “aim to disrupt fossil fuel-funded misinformation” on the global warming issue in general, but more like an advocacy group trying to promote the idea that solar power was better than fossil fuel energy. They apparently only had a modest media effect after three years of such effort. But within mere hours or days after their big “Utilities Knew” report came out, seemingly reinforcing a new, much improved media influence for them, it was getting an inordinate amount of media coverage, ranging from a Reuters article to a slick video at the Weather Channel.

What paves the way for that much immediate attention?

Daniel Stevens at the Campaign for Accountability mentioned this odd media situation in his July 2017 “How the Energy and Policy Institute dupes the media into covering its work” article regarding a different E&PI report from May 2017 … and pointed out another troubling problem (subsequently appended by E&PI in a manner not exactly helpful to them) that’s rather eerily similar to the transparency problems plaguing Kert Davies’ Climate Investigations Center and Davies’ own eerily similar inordinate media access.

When the Energy and Policy Institute (EPI) released a report recently about the source of the Edison Electric Institute’s funding, it received widespread media coverage in prominent newspapers, blogs, and energy newsletters. …. Although the group states that it takes no financing from corporations or trade groups, even this is impossible to verify thanks to its deliberate lack of transparency as to where its money comes from.

This is acutely hypocritical, considering the way Dave Anderson was demanding transparency from companies he criticized before he even started working for E&PI. 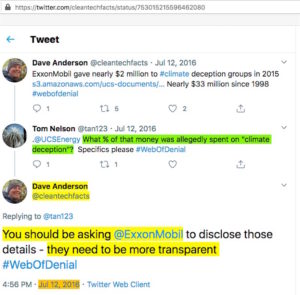 A response by Anderson to the critical Daniel Stevens article has apparently never been given regarding E&PI’s funding and how the media salivated over their reports.

Perhaps some of that media attention in July 2017 was due to Anderson’s own Twitter barrage on July 25th – scroll to the bottom of Twitter’s search results for the first-ever appearance of the hashtag “#UtilitiesKnew”, and it will show 12 tweets from him and 30+ others (oops, oops / oops) the same day using that hashtag.

A fair question to ask is whether Anderson really is an objective researcher if he feels a need to publicize a report with that much vigor, and whether Anderson can objectively report about the overall energy industry when he previously displayed a clear animosity toward a part of the industry that’s the target of his ‘investigation.’

But the far bigger question to ask, in light of the amount of media coverage of E&PI’s “Utilities Knew” report within hours of its publication, and all the ties to Kert Davies: is this the sort of thing that nearly $5 million buys? Reports containing corruption evidence relying on never-used newspaper ads / never-used leaked memo phrases; immediate access to media outlets who never question anything about these efforts; and failed attempts worthy of six-figure refunds for trying to make the “#UtilitiesKnew” hashtag go viral?

I make no accusations here, I’m not a reporter, and I have limited investigative resources. I just point out what I see, and this collective situation resembles a huge building with smoke billowing from every opening. As the old saying goes, where there’s smoke, there’s fire. Objective journalists and governmental / legal action investigators could tell us all if what I point out are genuine indicators of huge problems.
————————————————————————
** This stuff and the incestuous connections absolutely never ends. See: “When ‘Reporting’ looks more like Propagandizing.”