Feb 24-25, 2023 conference details here. I live at a sub-poverty level, so what follows is how much it would cost. END_OF_DOCUMENT_TOKEN_TO_BE_REPLACED 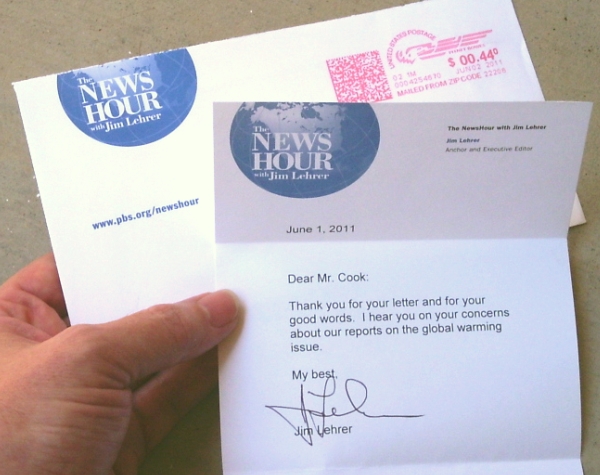 END_OF_DOCUMENT_TOKEN_TO_BE_REPLACED

For loyal readers following along here, and for new arrivals: a medical situation with a family member is interrupting my blogging right at the present time. Those of you who’ve had relatives or friends that must be placed in assisted living homes know how cumbersome these changes can be. I see an end in sight, probably around the first week of May. Rest assured, I’ll be right back here where I left off, in my dissections of the smear of skeptic climate scientists.

4/19/19 small update: A brief window of available time allows me to put out a post here.

4/11/19 small update: Had to revise the tally of the NewsHour global warming reporting bias once again.

4/8/19 small update: From receiving an alert on this Reuters article about a European global warming lawsuit action filed by Greenpeace, it looks like one of my tasks will be to see if the lawsuit isn’t enslaved to the same worthless ‘leaked memo evidence’ that the U.S. global warming lawsuits are.

Stepping outside of my usual blog posts to offer a bit of history which some of my readers may not know much about. It was ten years ago today that my first-ever online article appeared, and it had nothing to do with the false accusation about ‘Big Coal & Oil’ paying skeptic climate scientists to spread lies undercutting Al Gore’s ‘settled global warming science.’ END_OF_DOCUMENT_TOKEN_TO_BE_REPLACED

While today’s blog post – which also serves as an entry into a writing contest titled “You are Enough” – is not my usual focus on particular details which implode the notion that the fossil fuel industry ‘pays skeptic climate scientists inject misleading lies into the settled science certainty of man-caused catastrophic global warming,’ it will nevertheless illustrate one of the core problems with that particular political angle of the issue. Specifically, writers who believe in themselves and their ability to write effectively enough… or the lack thereof … to successfully promulgate Al Gore’s side of the issue. END_OF_DOCUMENT_TOKEN_TO_BE_REPLACED

Loyal readers here might be wondering where I’ve been for the last two weeks…. END_OF_DOCUMENT_TOKEN_TO_BE_REPLACED

[9/4 Author’s edit] My followers here saw this particular blog post as an explanation of why my Green Corps series Part 3 post was being interrupted, with the explanations that follow. Thought it would be worthwhile to save the material, with just a bit of a re-write. END_OF_DOCUMENT_TOKEN_TO_BE_REPLACED

Loyal readers here might have noticed some drop-off of material here in the last couple of months, as I’ve otherwise tried to put in 3 or 4 blog posts per month over the last year. That stems largely from a hobby pursuit of my which ate up a good chunk of April, and I’ve been having some fun just recently outside of my standard examination of the history of the smear of skeptics. Please see “Climate Change Free Speech Prohibited at DailyKos“,  “Merchants of Doubt: A Climate Change Dud”, and my additional review of Oreskes’ film at the Internet Movie Database site. Plus, some amount of my time goes toward dropping into hard-core global warming believers’ sites, ultimately to live rent-free in those bloggers (plural, I should note) / commenters’ minds. So much to do, so little time to get everything done.

Rest assured, my dissection of the events and people involved in the smear of skeptics goes on. Stay tuned, my long-held educated guess that Ross Gelbspan did no ‘investigative journalism’ research into his claims that Western Fuels was out to “reposition global warming as theory rather than fact” is now something I can say (via interview results conducted by a renowned politics researcher), with absolute certainty. The most basic of interviewing of key people surrounding the leaked memo page containing that infamous phrase would have told Gelbspan it was never part of the public relations campaign he claims it was.

Global warming believers across the board trust that the ‘industry-corrupted skeptic climate scientists’ accusation has evidence to back it up, trusting in the notion that their leaders speak with authority about it being exposed by a ‘Pulitzer Prize-winning investigative journalist.’ I’ve already shown the backpedaling surrounding Ross Gelbspan’s ‘Pulitzer winner’ label. I just wonder now what kind of spin will be applied to his ‘investigative journalist’ label.

Since I’ve been labeled an “investigative journalist”, I’ll briefly dispute it, and then describe how no less than Democrat New York Senator and global warming believer Chuck Schumer says people like me are journalists. END_OF_DOCUMENT_TOKEN_TO_BE_REPLACED

Back in mid-August, I was thinking I could get in at least two if not three more blog posts here. But, a family matter interrupted that, and some residual distractions resulting from it may briefly slow me down occasionally. For those who check into this blog periodically to see what’s new, rest assured, I most certainly have not run out of material. For any pro-global warming people who might happen to be following this blog, rest assured, the audio/visual analogy of my work that I offered in my January 28 post will not be something you can purge from your minds anytime soon.