The alternative title description here, as applied to the ‘brains’ behind the now-dismissed pair of Oakland and San Francisco global warming lawsuits, might just as well be “Bullet Dodged.” That’s Matt Pawa, and this isn’t the first time one of his global warming lawsuits was dismissed. Look back to his 2008 Kivalina v. Exxon case.

The Oakland / San Francisco dismissal, handed down on 6/25/18, capitulates to the notion that catastrophic man-caused global warming is settled science …

In sum, this order accepts the science behind global warming. So do both sides. The dangers raised in the complaints are very real.

… and then veers off in a ‘jurisdiction’ tangent that abysmally fails to address core problems within the twin lawsuits: 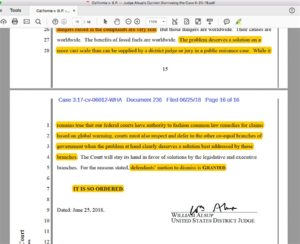 The problem deserves a solution on a more vast scale than can be supplied by a district judge or jury in a public nuisance case. While it remains true that our federal courts have authority to fashion common law remedies for claims based on global warming, courts must also respect and defer to the other co-equal branches of government when the problem at hand clearly deserves a solution best addressed by those branches. … For the reasons stated, defendants’ motion to dismiss is GRANTED.

In essence, the judge has declared this situation isn’t the court’s problem, it is S. E. P. Somebody Else’s Problem. The dismissal utterly overlooks fatal problems within the twin lawsuits which point to fatal problems in other related global warming lawsuits.

What are those other problems?

While it’s nice to see a roadblock pop up in these twin California cases, that’s all it is. Score one for the skeptic side, hollow as it may be. Hollow, because if I may borrow a quote, with a minor revision on the current situation, from an old online 2012 comment originally by Eric Baumholer:

Those who find themselves embroiled in a war, no matter how noble their ideals may be, have the same options as any other combatant: surrender, shed endless blood in inconclusive holding actions, or win. If winning is the chosen option, you have to be better than the enemy. That is to say, more devious and more ruthless. The climate front of the green culture war has drug on for over two bloody decades because the skeptics have committed to nothing more than a hoped-for victory by accident or sheer attrition, which is barbaric. That said, global warming lawsuits which are allowed to die via attrition from legal technicalities are neither devious, nor ruthless. Just more blood and treasure.

There were, before yesterday, thirteen major communities-as-plaintiffs global warming lawsuits: these two, Pawa’s remaining pair of City of NYC v. BP and King County v. BP cases, the Boulder City/County / San Miguel County v. Suncor Energy trio, the Santa Cruz City/County / City of Richmond v. Chevron trio, and the San Mateo / Marin Counties / City of Imperial Beach v. Chevron trio. Each one of those contains science claims that are hugely undercut by skeptic climate scientists, and each insinuate those critics operate under corrupting influence from fossil fuel companies, and each one of these share fatal connections of one type or another to the core group of people who’ve attempted for more than two decades to smear the character of skeptic climate scientists through baseless ‘fossil fuel industry corruption’ accusations.

These twin Oakland / San Francisco cases shouldn’t have become another pair of scalps for the skeptic side to collect, a stake could have been driven through the heart of them that would have killed all the others once and for al by exposing how the main excuse for the public to ignore skeptic scientists isn’t merely worthless, but may very well be one of the biggest libel/slander efforts in history.

This entire time, which includes these latest lawsuits, the whole issue boils down to three talking points: “The science of man-caused global warming is settled; skeptic climate scientists are paid industry money to lie about it being not settled; reporters can ignore those skeptics because of those first two points.” Rather than become yet another case study for legal scholars to ponder on what to do next, one of the remaining cases should be cut open and used to expose more than two decades of mainstream media journalistic malfeasance about not reporting half of the issue, and about not spotting myriad problems with the ‘crooked skeptics’ accusation – a bare minimum example being whether one of their own supposed ‘investigative journalists’ was actually what everyone portrayed him to be.

The entire issue crashes and burns if that central ‘crooked skeptics’ point collapses. If Al Gore’s side had science facts that clearly refuted what skeptic climate scientists’ assessment reports contained, then there never would have been a need to call those skeptics “crooks.” That’s what ultimately can be exposed, if the remaining lawsuits don’t simply become more blood and treasure.