That’s Matt Pawa, who’s increasingly gaining fame as the leader of four current global warming lawsuits, and who was described in a December 2017 Huffington Post article as the main driver behind such legal action. “Wierdness”, because there is much about Pawa’s manner of establishing how ‘fossil fuel companies conspired with skeptic climate scientists to hide the harm of man-caused global warming’ in his landmark 2008 Kivalina v. Exxon lawsuit which makes no sense. And “Gelbspan” is the person who’s self-described as the first one to reveal that conspiracy.

What’s weird here is how Pawa can’t bring himself to give Gelbspan that direct accolade to this day, regarding Gelbspan’s evidence which appears plausible enough to nail fossil fuel companies to the wall for the whole world to see.

By early 2008, when Pawa finished assembling his Kivalina case and was ready to file it in court, Ross Gelbspan was near the pinnacle of his fame as a someone who unmasked a sinister corporate conspiracy, revered by people ranging from anonymous commenters at Washington Post Fact Checker articles, to major magazine article writers, and even to Vice President Al Gore, whose companion book for his 2006 documentary movie proclaimed in regard to sinister fossil fuel industry efforts,

One of the internal memos prepared by this group to guide the employees they hired to run their disinformation campaign was discovered by the Pulitzer Prize-winning reporter Ross Gelbspan. Here was the group’s stated objective: to “reposition global warming as theory, rather than fact.”

And there’s no way to miss what Gelbspan himself implied about his role in this revelation in the April 2007 Frontline “Hot Politics” national broadcast. Perhaps Matt Pawa, who had already earned the label “global warming litigator” by 2006, was impressed enough with all of this behind the “reposition global warming” leaked memos to include them in his 2008 Kivalina case, and was apparently impressed enough with Gelbspan’s work to cite him directly in that lawsuit.

But Pawa seemed to bend over backwards not to directly credit Gelbspan with anything relating to those leaked memos.

As I showed in my prior blog post, Matt Pawa seems to indicate a good familiarity with Gelbspan in his current King County v. BP global warming lawsuit, as seen in a citation reference to an article copy at Gelbspan’s HeatIsOnline website. But the elemental question is, what does Pawa know about both Gelbspan’s ‘crooked skeptics’ accusation in combination with those worthless leaked “reposition global warming” memo set, and when did he know all of it? Let’s start with the Kivalina case and work backwards:

1. A specific assertion in the case about the “Exxon funding” of skeptic scientist Dr S Fred Singer is sourced to Sheldon Rampton’s (designer / creator) SourceWatch website (click image to enlarge): 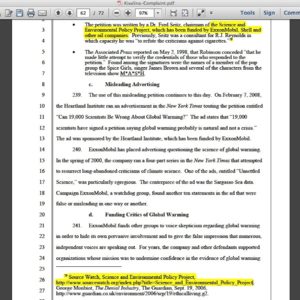 …the Science and Environmental Policy Project, which has been funded by ExxonMobil, Shell and other oil companies ..

This isn’t the first time in the Kivalina case when Matt Pawa could have skipped a Rampton citation and cited Gelbspan directly instead. But hold onto that thought for a few moments.

2. In his 1/1/2006 “Behind The Curve: The National Media’s Reporting on Global Warming” 27-page paper concerning the viability of global warming lawsuits, Matt Pawa displayed a very good understanding of Gelbspan’s viewpoints about the unnecessary requirement to give skeptic climate scientists ‘fair media balance’ — not just once, but twice.

3. Pawa further shows his familiarity with Gelbspan’s HeatIsOnline website in the 2006 “Behind the Curve” paper by noting how a particular Wall Street Journal article can be read at Gelbspan’s site … despite how the article has always been available directly at the WSJ to this very day.

Point being, Ross Gelbspan’s overall notoriety isn’t unfamiliar to Matt Pawa, thus he is not likely to have never heard of what Gelbspan is most famous for, his so-called discovery of that leaked “reposition global warming” / “older, less-educated men” / “young, low-income women” strategy/targeting memo set. The weird thing here is how Pawa seemingly chooses never to mention them in direct connection to Gelbspan.

Let’s go one increment further on this ‘leaked memo’ angle with Pawa’s Fall 2005 lengthy paper about the viability of future global warming lawsuits, “Global Warming as a Public Nuisance: Connecticut v. American Electric Power” and then work our way forward.

1. Despite the sheer length of his 2005 paper, Pawa only devotes partial paragraph footnote space to the topic of misinformation being spread by the fossil fuel industry:

“EEI helped organize”?? That isn’t what the most prominent publication said at the time, Ross Gelbspan’s 2004 “Boiling Point” hardcover/2005 paperback, about those memos. But as I detailed with corroboration in my June 7, 2016 blog post, those memos were a rejected proposal from EEI to the Western Fuels “Information Council for the Environment” (ICE) public relations campaign, and thus those ‘strategy/targeting’ goals were never used in the ICE campaign, nor did EEI organize and implement any such strategy/targeting’ goals.

2. When continuing on the theme of an irresponsible media in his 2006 “Behind The Curve” paper, Pawa went into more speculation about ‘misinformation campaigns’:

Why is the press missing the boat so badly on global warming? The perception of a divided scientific community is largely the product of a long and sophisticated public relations campaign by the electric power, coal, oil, and automobile industries to mislead the public … through the use of industry-funded “skeptics.” …

… The use of industry-funded “skeptics” to cast doubt on the science seems to have succeeded in fooling many journalists who report on global warming—even as a subset of those journalists have unmasked this effort.

Which journalists did Pawa credit with this “unmasking?” Not his aforementioned journalist Gelbspan, but instead a variation of the list from the 2005 paper.

3. As I’ve shown several times in my blog posts here, Pawa indicated that those leaked strategy/targeting memo phrases were incriminating enough that he prominently cited them in his 2008 Kivalina case. Prominently enough that it caught the attention of US News & World Report. But who was his footnote #64 source for the people who ‘exposed’ these memos?

There’s that Rampton name again. Remember what I said above about “Matt Pawa could have skipped a Rampton citation and cited Gelbspan directly”? Watch this:

The Burton-Rampton article version that Pawa might have accessed during the assembly of his Kivalina case does indeed contain the assertion seen in Pawa’s paragraph about one of the scientists disassociating from the ICE campaign. But it also says the following:

… a U.S. corporate coalition including the National Coal Association, the Western Fuels Association and Edison Electrical Institute created a PR front group called the “Information Council for the Environment” (ICE) … in a campaign to, in ICE’s own words, “reposition global warming as theory (not fact).” …

… The ICE was run by Bracy Williams & Co., a Washington-based P.R. firm. Using opinion polling, it identified “older, less-educated males from larger households who are not typically active information-seekers” and “younger, lower-income women” as “good targets for radio advertisements” …

Now we have the ICE campaign being run by some PR firm instead of by Western Fuels. But who is Burton-Rampton’s source? They don’t have footnotes like lawsuits do, but at the end of their article, it says:

Part of the information for this story was provided by the Clearinghouse on Environmental Advocacy and Research (CLEAR); by Ross Gelbspan, author of The Heat Is On; and by Sharon Beder, author of Global Spin: the Corporate Assault on Environmentalism.

If all that convoluted effort to avoid directly citing Ross Gelbspan as the source for those worthless leaked memos wasn’t weird enough, Matt Pawa made his situation one step incrementally weirder by citing Mathew Wald’s NYT article for them. An article which further says the Sierra Club was the provider (despite that organization never acknowledging any such role), while additionally pointing out how an official with the ICE campaign said the collective memo set material was unsolicited and never used (ironically corroborated by Ross Gelbspan).

And now, unlike the other more trendy California global warming lawsuits which unabashedly bring up those leaked memos via their own convoluted efforts not to directly cite Gelbspan as the source, Matt Pawa’s new collection of lawsuits doesn’t mention them at all.

Has Pawa been continually and inexplicably weird in his dances around Gelbspan’s work … or does he know the inherent overall credibility problems with Gelbspan — the fact that he never won a Pulitzer, among myriad other red flags — and hopes nobody notices this smokescreen covering those problems?