Here we go again, with yet another lawsuit attempt to say ‘the science of global warming is settled, the fossil fuel industry knew this all along but paid skeptic climate scientists to say otherwise, thus victims can sue that industry to recover the costs associated of dealing with this settled science.’ The otherwise uninformed general public expects – rightly so – such lawsuit accusations to stand on their merits beyond any shadow of a doubt. They’re supposed to be open-and-shut cases, welcoming independent corroboration and never having the remotest appearance of hoping nobody checks the veracity of the accusation evidence, or look like they’re using shell game tricks to obscure the origins of a highly questionable solitary evidence source, or give any impression, however slight, that the so-called evidence is actually part of an orchestrated long-term effort to advance a political agenda by marginalizing critics through baseless character assassination.

This latest case not only fails on all those points …..

….. it also illustrates a growing pattern to these most recent global warming lawsuits: some rely on the infamous (but worthless) ‘reposition global warming as theory rather than fact’ leaked industry memo set to support claims about a fossil fuel industry / skeptic climate scientist conspiracy, without having a readily obvious connection to environmental attorney Matt Pawa; and others don’t mention those memos while having either the appearance of mimicking Pawa’s lawsuits or they are Pawa’s lawsuits (e.g. Oakland/San Francisco and NYC. (Pawa, by the way, has the unique distinction of both leading such a lawsuit and using those memos in his lawsuit).

Throw this King County filing onto the latter pile of Pawa-led lawsuits.

Since the particular wording within this newest King County lawsuit that indicts a specific skeptic scientist — Dr S Fred Singer — of engaging in tobacco industry-like conspiratorial work with fossil fuel industry people is nearly identical to Matt Pawa’s Oakland / San Francisco and NYC filings, it’s tempting to just write a really short blog post here saying “My dissections of Oakland/San Francisco and NYC detail how lame the now four-times-repeated accusation against skeptic scientists is, and how the main lawyer within them is connected to the clique of people long associated with the smear of those scientists.”

The one reference in the Pawa-led Oakland/San Francisco/NYC trio, which the judge rejected in the Oakland case as evidence of an industry conspiracy effort, is significantly reworded in this latest King County filing. Compare Oakland’s to King County’s (click image to enlarge): 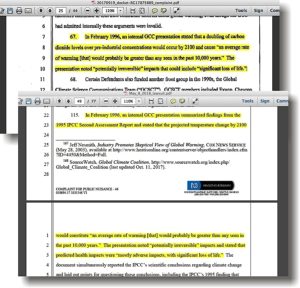 Oakland: In February 1996, an internal GCC presentation stated that a doubling of carbon dioxide levels over pre-industrial concentrations would occur by 2100 and cause “an average rate of warming [that] would probably be greater than any seen in the past 10,000 years.” The presentation noted “potentially irreversible” impacts that could include “significant loss of life.”

King County: In February 1996, an internal GCC presentation summarized findings from the 1995 IPCC Second Assessment Report and stated that the projected temperature change by 2100 would constitute “an average rate of warming [that] would probably be greater than any seen in the past 10,000 years.” The presentation noted “potentially irreversible” impacts and stated that predicted health impacts were “mostly adverse impacts, with significant loss of life.”

A rather huge difference. Point being, the first version implies the fossil fuel companies and their associates knew full well on their own that global warming was an imminent threat. The reworded version only says the “smoking gun evidence” was no more than a summary of content elsewhere, of which anyone could point out that the industry people don’t indicate whether they know this material is correct or not. Thus it isn’t proof of a conspiracy to hide knowledge. As I suggested at the end of my post about how the Oakland Judge’s rejection of this potentially implodes the San Francisco and NYC cases, it needs to be asked if Matt Pawa knew this evidence was not what he portrayed it to be, and if so, it should also be asked when he knew it.

Among these Pawa-led Oakland / San Francisco / NYC / King County lawsuits, only San Francisco and King County feature citations for the item about Dr Singer being “paid by the tobacco industry to create doubt in the public mind about the hazards of smoking”:

However, objective examiners will discover that neither the “Tobacco Industry Contractor” part of that SourceWatch Singer webpage, nor any of the rest of the page, contains any evidence that Dr Singer was “paid by the tobacco industry to create doubt.” As I pointed out before, Dr Singer is a non-smoker, thinks second hand smoke is harmful, and solely objected to the way the EPA labeled second-hand smoke as a carcinogen when evidence didn’t support that label.

This is only the tip of the SourceWatch iceberg problem. That site was created by Sheldon Rampton. Who was his primary source for the ‘corrupt skeptic climate scientists’ accusation before he formed SourceWatch? Ross Gelbspan, as I noted in my first global warming lawsuits blog post, and it was Rampton who not only got the “reposition global warming” leaked memo phrase which Gelbspan made famous into Wikipedia, but also into the U.S. Congressional Record. Matt Pawa only inadvertently points a giant arrow at that whole red flag problem when he cites SourceWatch.

Want to see circular citation in action? Pawa cites SourceWatch in his San Francisco / King County lawsuits for information proving skeptics engage in conspiracy actions; SourceWatch cites Matt Pawa for that kind of material at their current page about the Western Fuels Association, in their section on how WFA sued environmentalist groups. Click on their Reference #6 link at the end of that passage, and it takes you to footnote #6, where either mousing-over the link to the supporting article allows you to see Matt Pawa’s former office link, or you can click on the link to see how it takes you to his now-nonfunctioning page for the article. That’s the article Pawa had saved in his online collection at his former office about Western Fuels, regarding Ozone Action board member David Hunter’s desire to sue fossil fuel companies,” which apparently served as part of Pawa’s inspiration to do so. (For those unaware of it, Pawa represented Ozone Action — the place which gave the worthless “reposition global warming” leaked memo set its first real media traction —  in the lawsuit Western Fuels filed against them, which was the topic of the article Pawa saved.)

Pawa’s entanglement with SourceWatch/Rampton doesn’t end there. My first global warming lawsuits blog post detailed Pawa’s tortured evidence source for the “reposition global warming” leaked memo within his 2008 Kivalina case as being partly from Rampton, but there is an additional SourceWatch red flag connection in that case which I’ll have to detail in a future blog post titled “Pawa’s pro-/anti-Gelbspan Weirdness.”

First, for setup purposes, the HeatIsOnline website is Ross Gelbspan’s creation as a vehicle for his 1997 “The Heat is On” book, which is mainly infamous for its indictment of Dr Singer and select other skeptic climate scientists. Among Matt Pawa’s current set of global warming lawsuits so far, he never mentions Gelbspan, but two of the four, San Francisco and King County, cite Gelbspan’s webpage for the following statement:

One front group was the Global Climate Coalition (“GCC”). The GCC operated between 1989 and 2002. Its members included the API, and predecessors or subsidiaries of Defendants. William O’Keefe, former president of the GCC, was also a former executive of the API. ….

At least Gelbspan’s copy does indeed contain the claim about O’Keefe, but similar to so many other problematic accusations about ‘crooked skeptic climate scientists,’ this is not a cut-and-dried citation, it’s besieged with suspect details:

So who’s next, the City of Los Angeles v. Big Oil, and will the case be a Pawa-copied, Pawa-led, or ‘reposition global warming’-enslaved version? Or an even more politically suicidal combination of the latter two?

Any combination of that still points to the ultimate fatal collapse of the whole issue, because if there is no excuse not to seriously consider the climate assessments from skeptic scientists, then their work could potentially expose the whole issue as a meritless political agenda, which could then prompt one of the biggest collapses of an ideological position in history.