A student lawyer wrote a prize winning essay about how to get testimony from skeptic experts excluded from such cases. When you see what evidence this essay is based on, the question arises on whether the prize should be revoked and the writer reprimanded for not undertaking basic due diligence to find out if the “evidence” he cited was actually reliable.

First, for those unaware of what “Daubert” refers to, the name comes from the Daubert v. Merrell Dow Pharmaceuticals lawsuit, which subsequently led to the Daubert Standard, regarding what kind of expert testimony is permitted in court cases. In 2012, PhD meteorologist Dr Roy Spencer detailed the problems that Intergovernmental Panel on Climate Change (IPCC) climate models, and thus climate modeler experts, were facing concerning Daubert Standard acceptability. As ever, I leave discussions of climate science and other hyper-specific considerations (such as statistical analysis of data gathering) to those particular experts.

Experts from the skeptic side pose a serious threat to Al Gore’s side because they could undermine the entire notion of man-caused global warming being a “settled science.” So how do you exclude that kind of testimony from major global warming damages/costs recovery lawsuits? You try what was seen in an award-winning essay suggestion from the 2008 “Roscoe Hogan Environmental Law Essay Contest,” that such testimony may be ignored because it is unreliable junk science funded by corporations that’s irrelevant in the face of settled science.

On the certainty of the settled science, Hackney writes (click image to enlarge), 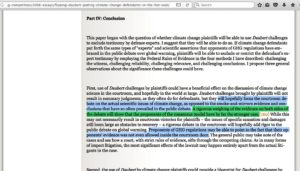 Daubert challenges … will hopefully focus the courtroom debate on the actual scientific issues of climate change, as opposed to the smoke-and-mirrors evidence and conclusions that have so often prevailed in the public debate. A rigorous weighing of the evidence on both sides of the debate will show that the proponents of the consensus model have by far the stronger case.

Proponents of GHG regulations may be able to point to the fact that their opponents’ evidence was not even allowed inside the courtroom door.

Who does Hackney cite for that #160 end note? One that goes to his #2 end note about IPCC reports, and to endorsements of them by the National Academy of Sciences / American Association for the Advancement of Science.

Uh, huh. That IPCC, the organization which others say in considerable detail is unreliable due to its assessment reports having massive problems with transparency, data availability and due diligence and other such related problems. And those kinds of endorsements, which are said to be basically illogical to use as reliable evidence of any kind.

For additional measure about the idea of settled science, Hackney brings up the statement – in relation to a position held by the late hurricane expert William Gray – that no peer-reviewed science journal-published papers were against the idea of man-caused global warming ‘settled science.’ Who was his source for that level of science paper certainty? The non-scientist Naomi Oreskes, who was not only criticized as being an unreliable source for determining what constitutes being ‘a science paper on global warming,’ but also a person who can’t reliably recount her own personal history events accurately.

Then there is the larger problem with essay writer Hackney’s conclusions about ‘unreliable junk science funded by corporations’: 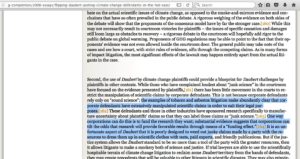 … the examples of tobacco and asbestos litigation make abundantly clear that corporate defendants have extensively manipulated scientific claims in order to suit their legal purposes. …

… One way corporations can do this is to fund the research they want; substantial evidence suggests that corporations can tilt the odds that research will provide favorable results through means of a “funding effect.” .. It is an unfortunate aspect of Daubert that it is poorly designed to weed out junky claims made by a party with the resources to dress them up in scientific clothes with tests, paid experts …

To support this notion, Hackney first feels compelled to point out more about the junk science funding of people who question the existence of the scientific consensus:

… much of the research that has challenged the consensus model in recent years has been published not by peer-reviewed journals but by conservative “think tanks” with no reputation for scientific credibility.[105]

What’s the source for that? His end note #105 is for a Vanity Fair 2007 article hit piece against the head of a think tank … containing apparently an obligatory swipe from Ross Gelbspan concerning the funding and thus the reliability of any scientists connected with such think tanks. But that’s not the end of the pattern about Gelbspan.

Hackney points to Dr Sherwood Idso as a great test case person when it comes to getting skeptic scientist experts rejected by the Daubert Standard, noting that…..

… Idso’s acceptance of energy company money is irrelevant to this question, as no part of Rule 702 or Daubert suggests that corporate funding diminishes an expert’s qualifications or the reliability of his or her work.

… but then goes out of his way to say,

… It should be noted that the Center for the Study of Carbon Dioxide and Global Change has been accused of receiving funding from ExxonMobil,[107] and that in 1991 Idso produced a video for the Western Fuels Association, a coal industry association, which extols the agricultural benefits of heightened CO2.[108] …

… even if Idso is a paid shill of the energy industry in some aspects of his career, he has also published several papers in independent, peer-reviewed journals.

If energy company money is irrelevant, why mention it not once, but twice? Meanwhile, who was the source for Hackney’s end notes 107 and 108? Ross Gelbspan … along with Salon writer Katharine Mieszkowski (whose 2003 article cited Gelbspan not once, not twice, but several times), and “Greenpeace USA née Ozone Action”’s ExxonSecrets site (created and run by Kert Davies, formerly of Ozone Action, the place that supposedly ‘obtained’ leaked industry memos with Ross Gelbspan*,which indict skeptics like Dr Idso of industry-funded corruption.)

*Let’s never forget just how reliable Gelbspan is, a person widely touted as a Pulitzer winner when he never won it, a person who essentially named Dr Sherwood Idso (when he wasn’t incorrectly naming another scientist) as being a willing participant in the Western Fuels “Information Council for the Environment” (ICE) public relations campaign’s efforts to target “older, less-educated males” / “younger, lower-income women” in order to “reposition global warming as theory rather than fact,” despite the fact that the ICE campaign had no such targeting or strategy intent.

What does essay writer Hackney say could be used to exclude Dr Idso from global warming lawsuits? Basically, his ‘small part of a larger picture’ work doesn’t aid lawsuit defendants to say their fossil fuel product isn’t responsible for increased CO2 emissions that cause bad outcomes. Hackney makes a counterintuitive assertion immediately afterward that melting glaciers — arguably a ‘small part of a larger picture’ — are all the evidence we need of CO2 causing rising temperatures. Skeptic scientists dispute that in considerable detail now, and did so as far back as when Hackney wrote his essay.

Other citations within Hackney’s essay do nothing to lessen the problem about any given prominent accusation against ‘industry-corrupted skeptics’ being separated by no more than three degrees from Ross Gelbspan and those worthless non-“ICE” “reposition global warming as theory, not fact” / “older, less-educated males” / “younger, lower-income women” memo strategy/targeting phrases. Briefly, he cites attorneys Matt Pawa in end notes 5 & 18 and David Hunter in end notes 4 & 18:

–  a series of articles, one of which was written by Ross Gelbspan
–  Greenpeace’s ExxonSecrets website
–  Greenpeace’s 2002 “Denial and Deception” report, with its non-“ICE” strategy/targeting phrases quotes sourced from the old Ozone Action organization.

Any reason why David Hunter would string together that collection of links as evidence for the ‘crooked skeptics’ accusation? Certainly. At the time Hunter wrote his 2007 paper, he was a Board of Directors member at Greenpeace USA, and he earlier held the same position at Ozone Action during the time when Ozone Action and Gelbspan ‘obtained’ those supposedly leaked ICE memos. And, one more thing: let’s not forget that Matt Pawa, at his former law office’s online page collection, had a particular article about Western Fuels suing a number of environmental organizations including Ozone Action, where it quoted David Hunter’s desire to one day make a legal argument about the fossil fuel industry running a misinformation campaign.

One final point of amusement: Is Hackney’s nearly decade-old essay the only prize winning lawyer student-written example enslaved to Gelbspan’s accusation? Afraid not. Before the footnotes begin at that one, it says “Editor’s Note: This Article was the winning entry in the eighth annual ELI-ABA-NAELS Constitutional Environmental Law Student Writing Competition.” May 2013. Gelbspan, meanwhile, appears as a citation no later than page 2, for the assertion that “dozens of books, articles, and websites document the concerted effort to distort climate science and to create doubt in the minds of the public and decisionmakers,” Give the writer a prize for dutifully regurgitating an unsupportable talking point there. Thing is, this other essay writer says his Part I section is not intended to discuss the misinformation efforts Gelbspan and others supposedly documented, but instead,

… it gives a brief background of the misinformation campaign in order to illustrate why such deception has not yet been subject to legal consequences, and how it might be subject to legal repercussions in the future.

Considering how this other newer essayist cites Gelbspan’s works at least another seven times, along with numerous other citations of James Hoggan and Naomi Oreskes who themselves provide nothing more than cascading citations back to Gelbspan, it seems he is oblivious to what a politically suicidal effort it would be make the case that industry-paid skeptics spread misinformation. His own citations only seem to fuel the fire regarding a enviro-activist misinformation campaign against skeptic climate scientists that’s entirely based on just one single set of worthless evidence. Want to see a particularly acute irony? This newer essayist mentions the Daubert Standard twice …..…. and he cites Hackney as his source for the second instance.

I can’t emphasize this enough: No matter where you go in the global warming issue, there’s Gelbspan and those worthless non-“ICE” memos. It’s the only weapon in the enviro-activists’ arsenal to indict skeptic climate scientists as industry-paid shills.

Jurors’ and judges’ eyes will glaze over from long techno-discussions about climate models, and if the persistent accusation notion goes unchallenged that skeptics operate in a parallel to the old tobacco industry’s ‘expert shills,’ it might be more compelling than mountains of skeptic science points.

Demonstrate how the accusation, led by a particular small clique of enviro-activists, potentially strayed into libel/slander territory with the intent to hoodwink the public, and you instead have a potentially monstrous courtroom drama backfire situation that any average citizen can understand.
————————————————————————
Hat tip to Dr Roy Spencer for unintentionally reminding me of my very old notes pile on Hackney’s “Flipping Daubert” essay.