An innocuous-looking mention of a university professor in connection with one of Al Gore’s latest public appearances is worthy of a major second look.

The situation was an Associated Press announcement about Gore’s pending February 7th, 2018 talk at a university. 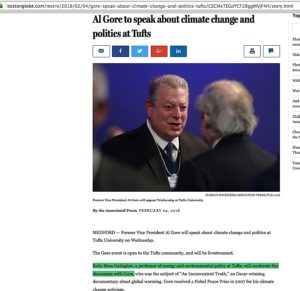 Kelly Sims Gallagher, a professor of energy and environmental policy at Tufts, will moderate the discussion with Gore, who was the subject of “An Inconvenient Truth,” an Oscar-winning documentary about global warming. ….

How pleasant, the main host for the talk has at least some related knowledge of the topic. Nothing else to see here, move along.

However, Kelly Sims Gallagher is not merely a coincidentally handy local Tufts University professor, she has direct connections with the same set of leaked industry memo phrases seen within the growing numbers of California global warming lawsuits — the “reposition global warming as theory rather than fact” strategy phrase and the “older, less-educated males” / “younger, lower-income women” targeting phrases — which are widely repeated elsewhere as proof that the fossil fuel industry ‘pays skeptic climate scientists to participate in misinformation campaigns’ undermining the certainty of catastrophic man-caused global warming (despite those memos being worthless as evidence, but that is another matter).

Here’s Ms Gallagher’s connections, back when she was just going by the name “Kelly Sims”:

Dr. Michaels and Balling were part of a July 1996 public relations experiment in 1991 which purported to “reposition global warming as theory, not fact.” According to Kelly Sims of Ozone Action, “Efforts by Fred Singer and others to cast doubt on the most thorough, sophisticated and internationally-based consensus on climate change is part of a well-coordinated plan to mislead the public and policymakers.”

What are Al Gore’s connections? 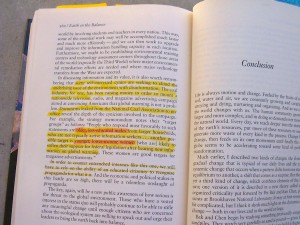 Documents leaked from the National Coal Association to my office reveal the depth of the cynicism involved in the campaign. For example, the strategy memorandum notes their “target groups” as follows: “People who respond most favorably to such statements are older, less-educated males from larger households, who are not typically active information-seekers … another possible target is younger, lower-income women …

The question today is, what does Al Gore know and when did he know it about where those supposedly leaked “Western Fuels / ICE” strategy/targeting memos actually came from?

The problem is, Gore might just say he doesn’t recall. Perhaps Ms Sims Gallagher could be prompted to tell what she knows about that situation. It’s interesting how John Passacantando’s Ozone Action group and Ross Gelbspan both seem to have ‘obtained’ those memos magically out of thin air.

What’s also potentially interesting — if Exxon’s lawyers elects to pursue it — about their pre-suit deposition of the key attorney seen in lawsuits against them, Matt Pawa,* may be his correspondence “not limited to” one particular person who’s also famous for repeating the non-“ICE” strategy phrase ….. supposedly archived at a place where they actually were not ….. while crediting a person for alerting her to them and related documents ….. who turns out to be a person with authority to add notes to those old ICE campaign leaked documents ….. who turns out to have a direct connection to Al Gore ….. when Gore was using those documents as a weapon against skeptic climate scientists in 1992 ..… which were much more recently re-suggested for usage as a weapon against Exxon ..… by the same person who Al Gore name-dropped not only in his appearance at New York Attorney General Eric Schneiderman’s big March 29, 2016 ‘prosecute Exxon’ press conference, but also in this days-old talk with Kelly Sims Gallagher.

* (that Matt Pawa, of Kivalina v. Exxon fame with its enslavement to those non-“ICE” memos, in connection with that John Passacantando … etc.)

See where a possible cascade of correspondence connections can ultimately lead an investigator?

This is why any innocuous-looking mentions of people in connection with the accusation about ‘industry-paid skeptic climate scientists’ are worthy of second looks. Perhaps while some of the core pushers of that accusation won’t reveal damaging material about the entire situation surrounding those worthless non-“Western Fuels/ICE campaign” memos, there is very likely at least one or more weak members of that clique who are willing to turn on the others just to save their own skins.