So, when far-left extreme enviro-activists say now that “Exxon Knew” years ago about the true reality of the the overall global warming science situation but later used disinformation campaigns to steer the public in the opposite direction, are they inadvertently admitting that …….

…. Greenpeace knew about the true reality of the the overall global warming science situation and felt compelled to spread disinformation to support a false position?

A July 1992 New Republic article, “Hot air and global warming: Gregg Easterbrook questions the environmentalist rhetoric that would have us believe our planet is on its last legs” suggests that might be true via the following bit regarding a survey Greenpeace undertook at the time (my screencaptures of the text come from the more appropriately named Legacy Tobacco Documents Library’s lousy scan of the original print version):

In exemplary doublespeak, some enviros put forth that dissenting views should be suppressed in the name of balance. Mr Gore, for example, says reporters should attach little weight to scientists who question greenhouse emergency claims, because perhaps 2 per cent of credentialed researchers feel that way. This simply isn’t true. Greenpeace recently surveyed climatologists, doubtless hoping for evidence of global warming panic; instead, it found that the largest group of respondents, 47 per cent, believe a runaway greenhouse effect is almost impossible.

But Easterbrook’s article also had this prescient note:

Ozone depletion someday may imperil life, but with CFCs being banned, there’s little left to advocate, unless you know of a means to plug volcanos. Global warming holds out the appeal of a sweeping calamity, a bad science fiction movie come true. Enviros now seem almost to be rooting for temperature increases.

Now, consider what happened right around the time of Easterbrook’s article, and what happened within the next eight years, via these screencapture link items:

Karen Lohr, ozone project director for the Greenpeace environmental group in Washington, said that Greenpeace is planning to launch an outreach program to make natives of northern Canada aware of the dangers of increased radiation. Lohr said that of greatest concern to Greenpeace is the long-term effects of increased radiation on the Arctic’s food chain. “It won’t be surprising to see blind polar bears up there,” Lohr added.

It doesn’t help that one of the most visible environmental advocacy groups fighting for action against global warming was called Ozone Action.

But where were both Passacantando and Davies seen much more recently? In efforts to hammering the idea that “#ExxonKnew” years ago about the true reality of the the overall global warming science situation. 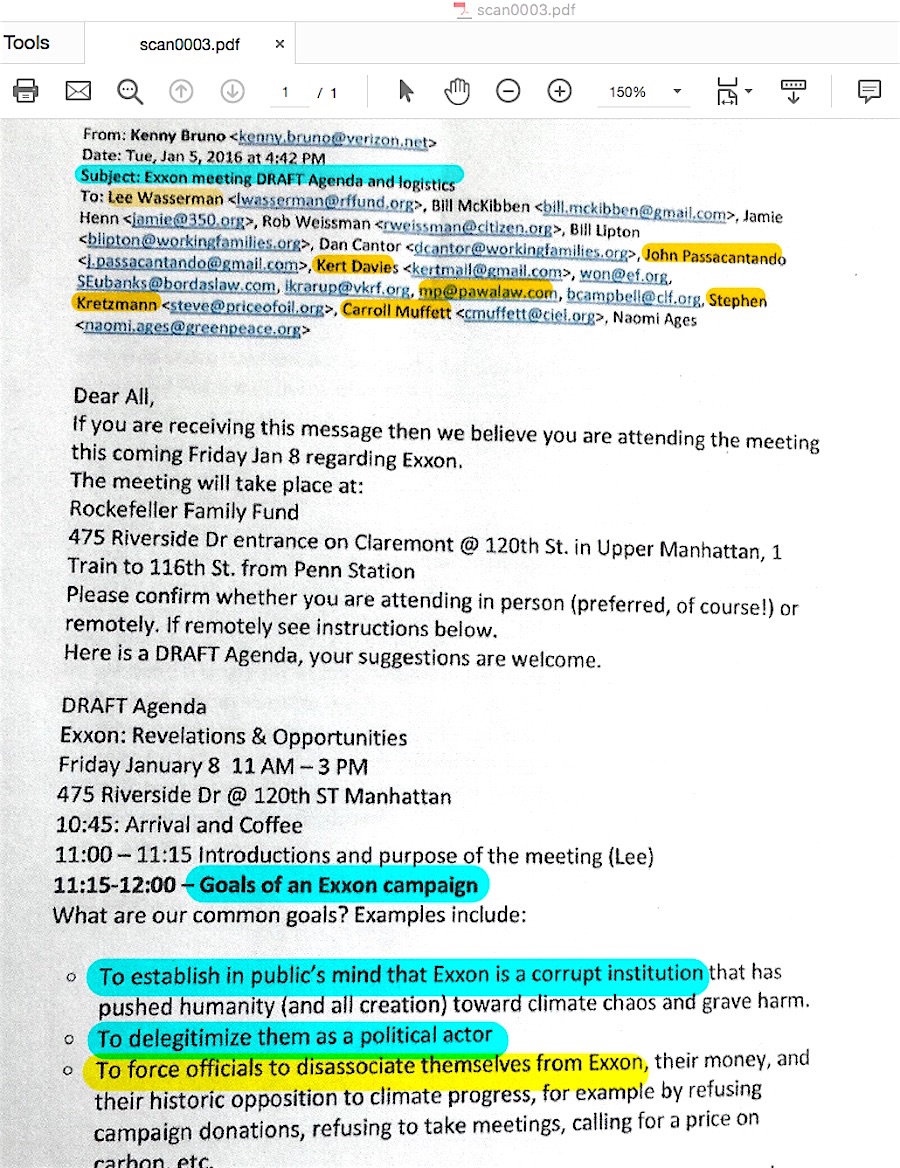 Technically, I should have titled this blog post “#GreenpeaceNéeOzoneActionKnew,” but readers here will get the basic idea of my point.

No matter where you go in the #ExxonKnew overall accusation, there you are with the accusation’s core evidence about fossil fuel companies knowing their product caused catastrophic man-caused global warming, but created disinformation campaigns with the express strategy to “reposition global warming as theory rather than fact” in the minds of an ignorant public that consisted of “older, less educated males” and “younger, lower-income women.” Core evidence which I have detailed as being worthless to prove the accusation because it was dead on arrival where it was first proposed and never ultimately acted on.

So, once again, when enviro-activists say Exxon knew the science but spread disinformation to cover that up, are they actually telling us that a core clique pushing that false accusation knew the actual science situation, but felt compelled to spread disinformation about the credibility of skeptic climate scientists to cover that up? When they hint how big name fossil fuel company executives need to come clean about misleading the public, are they instead pointing an arrow the size of Texas at their own big name environmental organization executives?