Back in my July 31, 2014 blog post, I asked that simple question. Just three days ago in the Shub Niggurath blog post “RICO-teering: How climate activists ‘knew’ they were going to pin the blame on Exxon”, I saw the answer in a quote from no less than the man running The Legacy Tobacco Documents Library himself, Stanton Glantz. Except, rather than it being a nice tidy answer, it instead only begs for questions of why it takes on the appearance of a major narrative derailment.

Because the Legacy Collection’s software and infrastructure is already in place, Glantz suggested it could be a possible home for a parallel collection of documents from the fossil fuel industry pertaining to climate change.

There’s no exact date on when Glantz offered this suggestion, but the cover page of that “Establishing Accountability…” report describes itself as a “Summary of the Workshop on Climate Accountability, Public Opinion, and Legal Strategies” which took place over two days in June 2012. One would have to resort to entertaining legalese backpedaling to say Glantz made the statement at some other time and date. And, at the end of the report’s list of the workshop’s participants, we see a photo of them, with Glantz featured prominently at the left standing almost shoulder-to-shoulder with Desmogblog’s James Hoggan. Interesting to note that workshop organizer Naomi Oreskes and the “not pictured” Matt Pawa owe much of their persecution of skeptic climate scientists to Ross Gelbspan, but as my Hoggan-Oreskes-Pawa links detail, that’s another long story.

Let’s get one thing crystal clear: Glantz’s library was created as a tobacco industry material-only library, Naomi Oreskes directly called it the “Legacy Tobacco Documents Library” in her 2010 book and even provided her readers with a link to it, “legacy.library.ucsf.edu.” The Oreskes-led 2012 workshop report described the place as “the so-called Legacy Tobacco Document Library“, but there was no doubt on what the library name was when readers clicked on the workshop report’s same “legacy.library.ucsf.edu” link. By default now, the link switches to a new url which goes to the tobacco documents tab of the library’s new name, the Industry Documents Library, while the old link showed an updated page stating that an all new Library* was coming out in June 2015. *[Author’s 6/27/19 addition: It’s a bit hard to tell when the organization fully adopted the finalized “Industry Documents Library” name, but it was apparently between September and November 2015.] A library now expanding to include pharmaceutical industry documents, with no apparent archive yet for fossil fuel industry / global warming documents.

So, let’s proceed on the hard-to-misinterpret statement offered by Glantz in 2012 at Oreskes’ workshop:  he was offering his tobacco documents-only library (one containing not merely industry documents but also 1960s newspaper articles) to all at that time as a possible home to documents from the fossil fuel industry, and presumably also material pertaining to anything related to disinformation about global warming.

That’s where a big problem immediately pops up. In regard to the Bracy Williams brochure I described in my 2014 blog post – its name being a critical item in the ‘industry-corrupted skeptic climate scientists’ accusation – scroll down the right side slider panel here to see what date is there for its placement in the Tobacco Legacy Files: “2009 November 30.” (click image to enlarge) 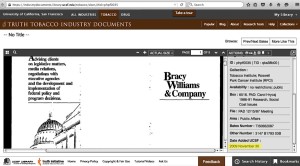 That’s a bit over two and a half years prior to Glantz’s offer to have such items in his library.

How about this one-page newspaper article, mentioning skeptic climate scientist Dr Patrick Michaels? Can anyone spot a single word within the article having a solitary thing to do with cigarettes, the tobacco industry, or that it would fall under the mandate that “papers … found during discovery motions by lawyers suing the tobacco companies” be placed “on an online library maintained by the University of California, San Francisco”? Then there is the date when this article about Dr Michaels was placed in The Legacy Tobacco Documents Library. “2005 April 27.”

Just over seven years prior to Glantz’s offer to have such items in his library.

The United States is an amazingly free country. Stanton Glantz and his staff can fill their library with as much global warming/fossil fuel industry material as they wish; Naomi Oreskes and all of her friends can cite that material all they wish as evidence of sinister industry misinformation efforts about global warming not being man-caused; enviro-activist lawyers can cite that material as evidence of racketeering-style tactics used by the fossil fuel industry to keep their businesses alive. But when not one of these people can prove skeptic climate scientists are lying, or that such skeptics’ assessment reports are fabrications bought and orchestrated by the fossil fuel industry, then an unavoidable appearance remains in plain view:  that this collective effort to say ‘big coal and oil’ people conspire with skeptic climate scientists to lie to the public the way the tobacco industry did about the harm of smoking is a politically based smear, with a tobacco parallel talking point dating back to at least late 1992 and endorsed by Al Gore in early 1995 (full text here) which was entirely designed to distract the public away from the non-political science-based criticism from those skeptics.

In other words, the appearance of enviro-activist racketeering for the sole purpose of keeping the notion of catastrophic man-caused global warming alive, when there is a distinct possibility that the public might otherwise lose all faith in the idea after listening to skeptic climate scientists.