Nearly all of Greenpeace USA’s old “Ozone Action” web site was viewable by the public via the “Internet Archive Wayback Machine” from the time the site lapsed out of its ‘live online’ status around March 2001 until just a month or so ago. If all their work on ozone depletion / global warming was above reproach, as were the people associated with it, then why was there a sudden need to hide it all from public view?

Long story short, I don’t examine the opposing sides of global warming science, I leave that to the scientists to sort out. My focus is on the accusation that skeptic climate scientists are paid fossil fuel industry money to lie about the issue to the public. In late 2009, I decided to find out exactly what the origins of the accusation was and how it was supported.

The majority of internet references I initially found credited the accusation to ex-Boston Globe reporter / book author / “Pulitzer-winner” Ross Gelbspan, and his ‘discovery’ that the fossil fuel industry was paying skeptic scientists ‘under the table’ to “reposition global warming as theory rather than fact” – according to a leaked coal association memo he supposedly found. But, two problems were impossible for me to miss:  I could not find the actual complete memo anywhere in order to read it in its full context; and there were references of people citing that exact phrase before Gelbspan ever publicly mentioned it.

One reference in particular was especially perplexing because it said (3rd paragraph under the “Front Groups” heading, bold emphasis mine),

The Information Council on the Environment, which is a coal industry front group, incorporating the National Coal Association, Western Fuels, and Edison Electrical Institute amongst others, was formed in 1991 to “reposition global warming as theory (not fact).” It has a large advertising budget and in a media strategy obtained by Ozone Action, detailed its plan to target “older, less-educated males from larger households who were not typically active information seekers”, and to use scientists as spokespeople as they are more credible with the public.

Who the heck was Ozone Action? Everything I could dredge up at the time linked to an odd one-page web site (screen captured in a Yahoo search cache here, its current iteration seemingly just expired, more info here) with the most generic possible uninformative information about the ozone layer and global warming. Although I’d known about the “Internet Archive Wayback Machine” site since 2008, I hadn’t thought to drop the “ozone.org” url string into its search until September 2010. What a treasure trove it opened up, fleshing out the initially confusing references to an Ozone Action – Greenpeace association that I’d found earlier that year in unpublicized Greenpeace archive scans.

Just short of three years later, after copying 45 or so specific Ozone Action archive page links and pasting keyword phrases out of them into my huge notes file, and most recently linking straight to one of those pages here on June 10th (4th paragraph), POOF goes the entire archive, hidden behind the veil known on the internet as “Robots.txt“, a means of preventing individual pages or entire current or obsolete web sites from being viewed. 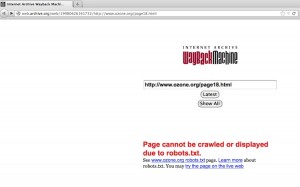 This manner of blocking viewers isn’t a nonhuman-generated or arbitrary action. For anyone to be prompted to take such an action, they would have to know:

The current USA arm of Greenpeace is arguably no more than a re-badged version of the old Ozone Action enviro-activist group which merged into it in 2000, installing its own top people there, Passacantando, Radford & Davies. If they have a perfectly reasonable explanation for blocking all the old Ozone Action web pages now, let’s hear it. I’ll reproduce it verbatim for all to see. While they’re at it, a tidy explanation of why their current executive director felt a need to scrub the Ozone Action reference out of his Greenpeace bio recently (detailed in my 8th paragraph addendum here) would be nice, too.

Otherwise, how is it possible for them to avoid the appearance that this action was done in deliberate fashion in order to hide what’s there? If Greenpeace cannot explain their way out of this, have they not joined the ranks of ClimateGate scientists deleting emails and files and hiding declines, the SkepticScience.org guys deleting critical comments and hiding their bizarre photos, the EPA hiding data / Lisa Jackson hiding emails about ██████████ , the BBC hiding their ‘global warming experts’ name list, and various other instances of ‘inconvenient content’ burial?

An educated guess is that enviro-activists will sidestep all of what I point to, yelling that skeptic organizations hide their funding. No, they used to openly disclose their donors, but since those people were inundated with hate from enviro-activists, this disclosure was stopped as a matter of courtesy for the donors. The key thing to consider is how enviro-activists’ “corrupt funding” vitriol was then and remains now unsupported by any evidence to back up the accusation.

That’s what this blog is all about:  finding out who all the people were who consolidated an accusation they had no hopes of proving. Apparently Greenpeace has placed a speedbump in the way of everyone who wants to see the origins of the accusation for themselves. Remember this fun adage though, “what has been seen on the internet cannot be unseen“, a lesson the ClmateGate scientists and so many others repeatedly fail to comprehend.

The old Ozone Action pages are hidden, not destroyed.