My primary focus at this blog is to illustrate myriad ways the ‘skeptic climate scientists are paid fossil fuel money to lie’ accusation falls apart, while the secondary implied point is that the mainstream news media has done essentially nothing when it comes to checking the veracity of any claim made within the global warming issue, whether it’s pure science claims or political analysis claims. Today’s topic is a case in point about one of the political angles.

One of the main reasons why I dissect the ‘crooked skeptic scientists ’ accusation is because of my long-ago curiosity about why such skeptics were being ignored by policy makers who were plunging ahead with cap-and-trade initiatives. The more I looked into it, the more I saw that the science viewpoints from skeptic climate scientists wasn’t being actively debated in news media outlets. I didn’t initially understand why until broader examination clearly showed scientist skeptics were viewed as little more that ‘shills’ of the fossil fuel industry … but that is another story.

Most notable to me at the time was the absence of climate skeptics on PBS’s weeknight NewsHour program, which was otherwise famous for its fair and balanced news analysis. In a subsequent article I wrote for AmericanThinker in late 2009, I detailed a particular talking point I saw in a reply from the PBS Ombudsman about this apparent reporting bias. A talking point seemingly traceable back to a singular figure.

When the “Journolist” story broke out in the summer of 2010 about active, covert collaboration among leftists to plant political themes in the news media, I offered an example at AmericanThinker on what appeared to be an older variant of that at the PBS NewsHour gleaned from the works of Ross Gelbspan. To additionally illustrate the extent of the biased reporting on the topic of global warming at the NewsHour, I quantified how there was practically no discussion of the skeptic side of the issue (click image to enlarge).

I’ve kept an ongoing count ever since that 2010 article. In my latest update effort of my overall tally of the bias, I ran across the following, from their July 29, 2018 broadcast titled “Why U.S. lawmakers failed to act on climate change decades ago”:

HARI SREENIVASAN: This coming week, The New York Times, in partnership with the Pulitzer Center, will publish “Losing Earth.” …. The topic is climate change and the scientific discoveries and decisions made in the decade between 1979 and 1989. ….

NATHANIEL RICH: .. By 1979, there was a strong consensus within the scientific community about the nature of the problem. …

NATHANIEL RICH: By the mid-50s, you had top government scientists speaking about the issue. You had major articles in Life Magazine and Time. So it wasn’t just industry that was following it. It was at the highest levels of government. Lyndon Johnson sent a special message to Congress in 1965 that discussed the problem.

Compare the NYT’s Nathaniel Rich article treatment of Johnson’s speech to the verbatim text of the speech, and it is once again obvious that two particular words – radioactive materials – needed to be erased from that speech in order for it to be subsequently portrayed as one concerning global warming to this very day, when it was instead all about pollution and basic environmental stewardship. 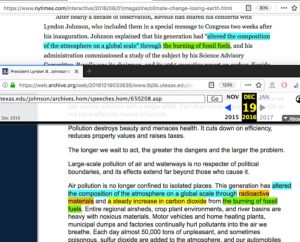 Ultimately, the depiction the entire 5200 word speech as some kind of clarion call about global warming hinges on just two words within it: “carbon dioxide.” The question remains as to whether President Johnson misspoke the words “carbon dioxide,” which is not an actual pollutant, compared to carbon monoxide, which is a real pollutant, or if he meant to say nitrogen dioxide instead.

See the problem there? See the larger problem when the speech excerpt – minus inconvenient words – is used as evidence in current global warming lawsuits to suggest there is a fossil fuel industry conspiracy to lie to the public about the certainty of man-caused global warming? See the still larger problem with the disingenuous portrayal of the speech being traceable to a single person who has a monstrous collection of credibility problems concerning her efforts to suggest skeptic climate scientists are part of a fossil fuel industry conspiracy?

See the biggest problem of all, when it comes to the mainstream media being either inexplicably negligent in doing their investigative jobs, or worse, seemingly complicit in spreading “the big lie” about a disinformation campaign being run by the fossil fuel industry, when every indication points to the exact opposite situation of a disinformation campaign pushed by the enviro-activist industry about the certainty of ‘settled global warming science’ and the certainty of ‘fossil fuel-corrupted skeptic climate scientists?’