*Or, you could say Climate Files compares to a new deceptive fiberglass body decorated with a logo design too similar to WikiLeaks, hiding a very tired old VW Beetle frame. 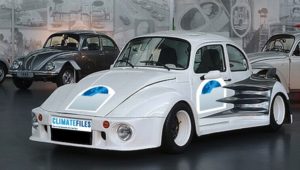 It was apparently serving the purpose of supporting the overall situation surrounding New York state Attorney General Eric Schneiderman’s efforts to sue Exxon, but since Schneiderman’s actions raise troubling questions, (fun screencapture from that piece here of the ‘usual suspects’) and since his prosecution efforts are plagued with unending problems, it appears Climate Files has now been re-purposed to support the more recent efforts of a different set of global warming lawsuits, namely the San Mateo / Marin / Imperial Beach v. Chevron trio I detailed in my previous post. The overall problem is, of course, that all of the collective notions about a fossil fuel industry deception campaign are enslaved to a solitary source of evidence that has been re-purposed almost to death over the last two decades.

To understand where we are now, we have to know where we’ve been. The setup is as follows:

ClimateFiles.com in its current iteration didn’t exist before its first early January 2016 post, and when a Google Search is configured to search for the site address’ earliest online appearance, the results are for May 4 and 6, 2016, for its “How to use” and About” pages, respectively. Kert Davies (there’s that name again) first mentioned its existence at his Climate Investigations Center site on May 23, 2016.

These documents all live at ClimateFiles.com, an archive built on the Document Cloud platform familiar to journalists, created with a grant by the Knight Foundation.

(Aside, for a ‘3 degrees of separation example’: The Knight Foundation notes that Jim Detjen is “the Knight Chair for Environmental Journalism.” In turn, Detjen said within a 2007 Knight Digital Media Center powerpoint presentation that “Journalists must deal with powerful disinformation campaigns … Goal is to “reposition global warming as theory, rather than fact,” according to author Ross Gelbspan. That’s the same so-called “evidence” appearing in the San Mateo / Marin / Imperial Beach v. Chevron cases that’s supposed to prove a conspiracy exists between fossil fuel industry people and skeptic climate scientists to lie to the public.)

Davies’ creation and introduction dates for Climate Files fall within two months on either side of NY AG Eric Schneiderman’s March 29 2016 press conference announcement of his prosecution of Exxon, and there is no way to miss how the site focuses on Exxon. Regarding this focus, however, it begs the question, why not simply add to the already existing Greenpeace “ExxonSecrets” document collection? Kert Davies is proud to say at his current Climate Investigations Center site that he was the chief architect of ExxonSecrets, but oddly makes little mention of it at CIC and doesn’t mention it in any direct form within his Climate Files site.

But as I said, NY AG Schneiderman’s anti-Exxon efforts was looking ever more doomed to collapse toward the end of 2016. How do you re-purpose a document collections site to be a little more broadly used in major global warming nuisance/damages lawsuits? You add in the mainstay of the ‘industry-paid skeptics’ accusation, the supposedly leaked Western Fuels “Information Council for the Environment” (ICE) campaign, with its smoking gun industry-adopted “reposition global warming as theory rather than fact” strategy phrase and its smoking gun targeting goals (click images to enlarge) 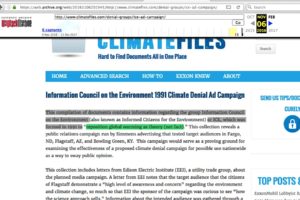 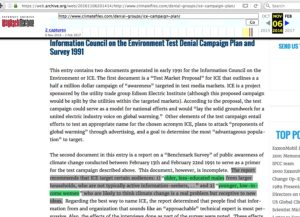 For any new readers arriving at this post without reading any of my other material, that’s the same strategy memo that Al Gore said Ross Gelbspan discovered, which Gelbspan quoted along with the targeting memo phrases in his 1997 book, and those are the same targeting phrases which Gore featured in his 1992 “Earth in the Balance” book years before Gelbspan ever mentioned them, and all of these specific memos were rejected proposals that never made it into the ICE campaign and thus cannot have subsequently become part of an industry-wide sinister campaign as Gelbspan and Gore portray it to be.

Scholar that I’ve become on all the accusations which are enslaved to those supposedly ‘Western Fuels Association ICE public relations campaign’ memos — which they are not — the new wrinkle to this situation is how Kert Davies’ Climate Files does not attribute them to Western Fuels in any way. This leads me to wonder if Davies and his associates are now aware through my work that they literally can’t tie those memos to Western Fuels, or if it is a tactic which allows them to imply a wider industry conspiracy is out there, such as what’s seen in this recent article? Click on the link for the “reposition” phrase at the article and it takes you straight to Climate Files’ ICE page.

Interesting how the San Mateo / Marin / Imperial Beach v. Chevron lawsuits essentially paints the same picture of an industry-wide conspiracy when they regurgitated the “reposition global warming” phrase. While the lawsuits at least got the “Information Council FOR the Environment” wording correct as opposed to Kert Davies’ incorrect automatic assumption, they do oddly dance around directly attributing ICE to Western Fuels. But the blunder by the plaintiffs’ lawyers was to cite Kert Davies’ Climate Files as one of the sources for the ICE “Chicken Little” advertisement. This only draws attention to how Davies not only requotes the ‘strategy/targeting memo phrases’ which were never used in the ICE campaign, but also to his attempt to spin the never-used “Informed Citizens on the Environment” as little more than an alternative name. Way back in 1991, the New York Times quoted an official with the ICE campaign as saying it was never used. This is independently corroborated.

The San Mateo / Marin / Imperial Beach v. Chevron lawsuit transcripts also cite Kert Davies’ Climate Files directly, not once, not twice, but three times. If this was the only the only indication of an association problem, people might just dismiss it as coincidence.

With bad news continually bedeviling NY AG Schneiderman’s efforts to prosecute Exxon, wouldn’t it be a good idea to draw attention to the next alternative to that, namely the San Mateo / Marin / Imperial Beach v. Chevron lawsuits? What’s one way to solve that problem? Create a new website called “ClimateLiabilityNews.org” which could trumpet the news of those lawsuits no later than four days after the lawsuits were filed, and continue to do so afterward.

Now let’s bring this full circle back to Kert Davies’ ClimateFiles.com web site. What’s yet another ‘3 degrees of separation from Ross Gelbspan’ here? Simply look who the site registrant is. Kevin Grandia, the proprietor of the Spake House Media digital marketing agency. Another of Grandia’s clients is the news organization at the heart of the “Exxon Knew” ‘news revelations.’ That Kevin Grandia, “the former Operations Manager at the Desmogblog website” who’s listed two spots below Kert Davies in the huge 2007 complaint filed against a British TV channel concerning ‘industry-corrupted skeptics’ which I detailed here. That Desmogblog, which was inspired by and built on the works of Ross Gelbspan.

Rummage through the balance of Climate Files’ so-called documents and there’s nothing else beyond those alleged ICE memos which remotely jumps out as irrefutable evidence of a pay-for-performance arrangement between fossil fuel people and skeptic climate scientists. Similar to other sites, Climate Files pads its ‘evidence’ with the next-most ‘damaging’ leaked memo, the American Petroleum Institute’s 1998 leaked “Global Climate Science Communications Action Plan” memo, which when read in its full context (“Victory” quote on pg 5), isn’t a sinister industry directive, it is a basic truism which even Greenpeace and Kert Davies would assert regarding the “certainties” of their own version of the issue.

What they really mean, is more propaganda is needed. Genuine hard-nosed, objective journalists would have exposed the smear of skeptic climate scientists long ago as what it apparently is: a core clique of enviro-activists who put all their eggs in one solitary “evidence” basket which has been repackaged and re-purposed ever since it came out by multiple people and entities, all the way up to right now with Climate Files, which inadvertently ties it all straight back to Ozone Action. That Ozone Action. The organization which John Passacantando merged into Greenpeace USA. That John Passacantando.

There’s no ‘new quickly growing world of climate change and legal liability’ currently happening, it already happened in the first round of major global warming lawsuits starting back around 2004. Rather than shed any new light on the accusation about fossil fuel executives conspiring with skeptic climate scientists to misinform the public about the certainty of catastrophic man-caused global warming, each one of these repackagings only muddied the water further on the real value of the “core evidence” – those allegedly leaked ICE memo phrases – which supposedly indicted skeptic climate scientists of industry corruption, and each time, they only pointed a giant arrow back at the original people who are actually the ones who should be on the receiving end of serious investigation and/or major legal action.